The delightful Old Town of Tallinn, the capital of Estonia, is one of the many highlights of any Baltic cruise. Recognised as a UNESCO World Heritage Site and a former European Capital of Culture the city has come a long way since becoming independent of the former Soviet Union in 1991. Today Estonia is a member of the European Union and home to a vibrant high-tech business community and growing tourism sector which sees 4 million annual visitors. Some half a million cruise passengers arrive in Tallinn every year on ships arriving mainly from Helsinki, Stockholm or St Petersburg.

Insider Tip: Visitors during the summer months may be surprised to find that in this most northerly of the Baltic states there are more than 18 hours of daylight. Daily temperatures aren’t as cold as you might expect (around 20¡C or 68F) but evenings can get fairly cold so pack accordingly.

Whilst the Port of Tallinn consists of five different harbours the vast majority of cruise passengers will arrive at the Old City Harbour. This cruise port is located less than 2km from the heart of the city centre and is one of the largest passenger terminals in the Baltic region. Provided you’re reasonably fit you shouldn’t have any problem strolling into the centre in about 15 minutes then discovering the city’s main attractions on foot. Alternatively, you can take a taxi in just 5 minutes – be sure to confirm the price before getting in. 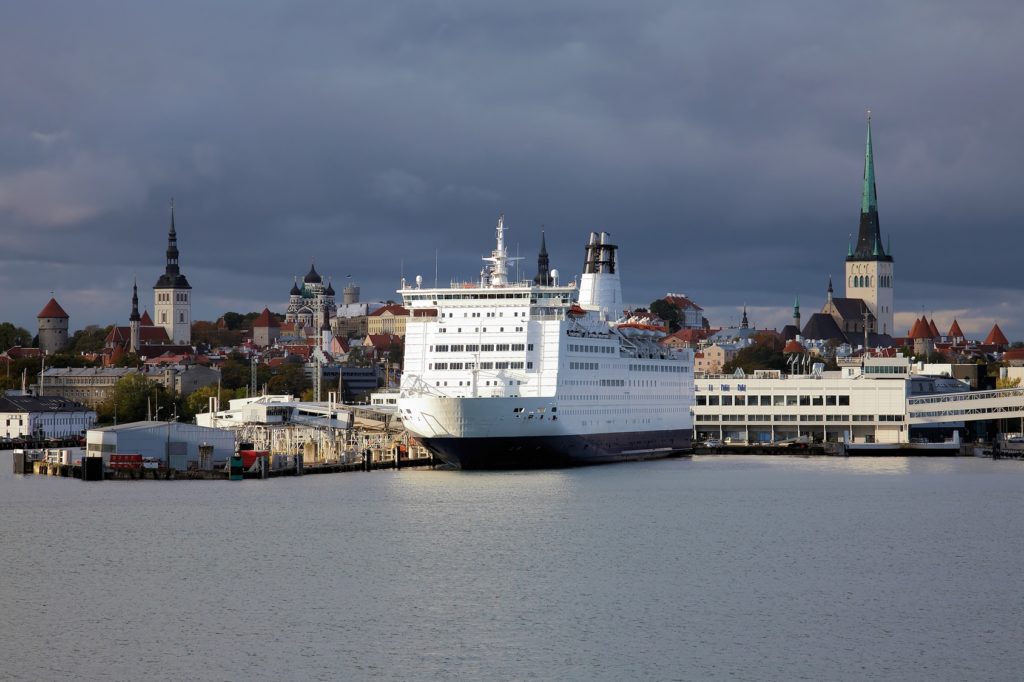 If you’re joining or departing a cruise ship in Tallinn you’ll most likely be travelling through the city’s international airport which lies just 5km from the city centre. Bus and taxi services are widely available on this route though you should be aware that taxis have a bad reputation for overcharging cruise passengers. For peace of mind you’re better off pre-booking a private transfer with Shuttledirect. This reliable company can also arrange for transfers from your cruise terminal and short excursions beyond the city limits on request.

Insider Tip: The currency in Estonia is the Euro. You’ll find plenty ATMs outside banks all over the city. 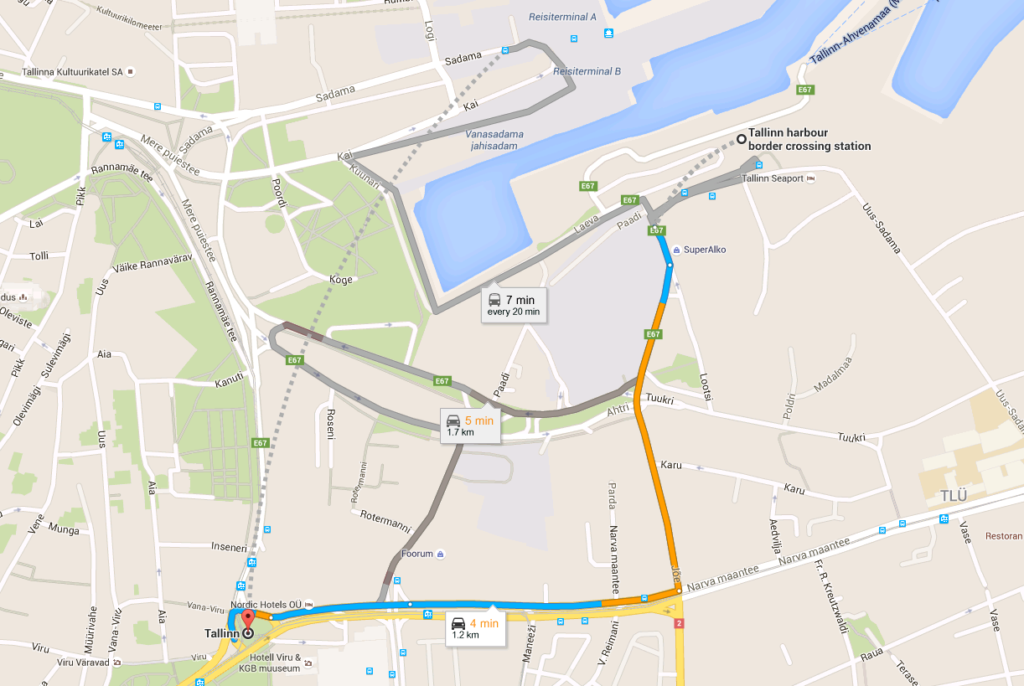 Getting Around in Tallinn

Once you arrive in the Old Town of Tallinn it’s a good idea to head for the very helpful tourist information centre at Niguliste 2. Here they’ll provide you with maps of the central area and you can ask if there are any imminent departures of free walking tours which are offered by local students in return for tips. If not, you can easily walk around the main sights of the Old Town under your own steam.

A popular way to get around for cruise ship arrivals is on the ‘hop-on, hop-off’ bus service which has a stop near the cruise terminal. The journey around the main city’s historic centre and Old Town lasts about 50 minutes if you don’t get off. An extended tour takes in some outlying suburbs though these can also be accessed by means of the city’s excellent tram and bus network.

The Old Town of Tallinn is tiny and easily accessible on foot. It is made up of an upper and a lower part. Some of the highlights include:

Town Hall Square: Thanks to its central location you’ll inevitably stumble upon this beautiful square as soon as you start looking around the Old Town. It’s a great place to stop for a coffee and take in the atmosphere of the historic centre and the ideal spot for arranging to meet up with fellow passengers.

Toompea Castle: This 9th century castle today serves as the Estonian Parliament building. It is the most important sight in the upper town.

St. Olaf’s Church: Probably the city’s most iconic structure thanks to its steeple which can be spotted from miles around. Located amongst an impressive selection of medieval buildings this is one of the main attractions of the lower town.

Seaplane Harbour: Located in the Kalamaja district, this newly renovated nautical museum is part of the Estonian Maritime Museum which tells the story of shipping around Estonian waters from time immemorial. It is one of the country’s most visited attractions where you could easily spend a few hours. Public buses and ‘hop-on, hop-off’ buses stop here.

Kadriorg Art Museum: This foreign art museum is housed in the beautiful Kadriorg Palace which was originally built by Peter the Great for his wife Catherine. It lies east of the Old Town yet is still accessible on foot or by tram.

Pirita Suburb: Still further afield in the same direction, this neighbourhood served as the base for sailing events during the Moscow Olympics. It is popular with locals during the summer months thanks to its beach. If you make it this far it’s worth going up to the restaurant in the television tower to enjoy a light lunch with great views over the city.

Open Air Museum: Located in Rocca al Mare, some 8km west of the Old Town, this is a fascinating reconstruction of an 18th century Estonian village. One of the ‘hop-on, hop-off’ bus routes has a stop here, otherwise you can take a city bus service. 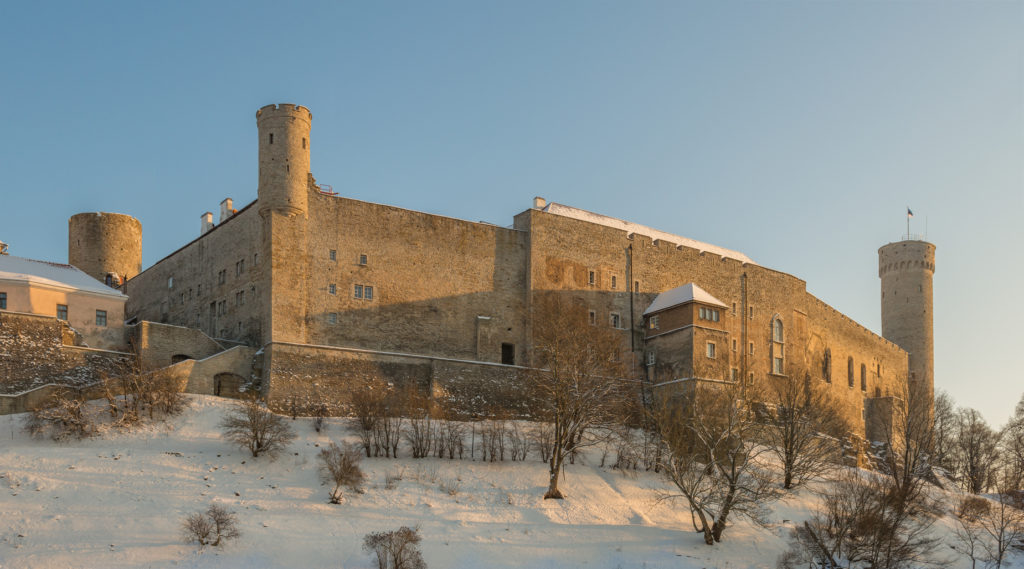 One Night in Tallinn

If you happen to be docked in Tallinn overnight a lovely way to spend the evening is by taking a dinner cruise on an old steamer called ‘Katharina’. Deartures are from the Seaplane Harbour at 6pm every evening during the summer and include a 3-course meal whilst cruising Tallinn Bay.

If you’d prefer to spend your evening on dry land then there are some excellent restaurants to choose from in Tallinn such as Rataskaevu16 (named after its address!) which is near the main square yet serves excellent local dishes at very reasonable prices. For classic dining in exquisite surroundings try Tchaikovsky (Vene tn 9) which is considered one of the finest restaurants in the whole Baltic region.

Depending on the dates of your cruise, your arrival in Tallinn may coincide with one of the city’s annual festivals which are well worth taking a look at. Highlights include the Tallinn Medieval Days Festival and the Íllesummer Beer Festival which attracts an impressive selection of musicians from all over the continent.