Located 500km north of Athens, Thessaloniki is the capital of Greek Macedonia and Greece’s second-largest city. Founded as far back as 315BC and named after Alexander The Great’s sister, Thessaloniki is a relatively new stop on the cruise circuit which is destined to grow in popularity as word of its attractions gets out. The city is packed with historical sights and offers a wealth of cultural activities which allow for an outstanding day in port before you head off to discover more gems in the eastern Mediterranean.

Economically the port of Thessaloniki has long been important thanks to its strategic location. Historically it grew as a key destination for the Roman Empire in facilitating trade between Rome and modern-day Istanbul as well as markets further east along the Silk Route. Today it one of south-eastern Europe’s major ports providing access to the whole Balkan region. The arrival of cruise ships is relatively new though there are an increasing number of cruise lines adding Thessaloniki to their Greek Island itineraries.

The location of the modern cruise terminal is ideal for passengers as it lies within walking distance of the city centre. Just turn right as you leave the port area and you’ll be there in ten minutes.

If you’re meeting your cruise ship in Thessaloniki or ending your voyage here you’ll most likely be passing through the city’s Macedonia International Airport. Located 17km south-east of the port area the journey takes about 30 minutes by road when traffic isn’t too heavy. There are numerous airlines offering scheduled services to Thessaloniki all year round as well as many charter operators who put on flights from all over Europe during the summer months. There are plenty taxis available between the city and the airport as well as a 24-hour airport bus service (number 78 by day and 78N at night) which goes to the city centre. For convenience the best option is to pre-book a private transport to or from Thessaloniki Airport with Shuttledirect which will transfer you directly between the cruise and airport terminals.

Getting Around in Thessaloniki

If you’re in reasonable shape you’ll be able to visit most of the main city sights on foot. However, if you prefer you can use the hop-on, hop-off bus service which has a stop at the cruise terminal and includes stops at most of the city’s attractions. Unfortunately, it seems that the service struggles to cope with numbers arriving on cruise ships so buses quickly get full and queues at bus stops become excessive.

An alternative which is highly regarded is the number 50 public bus service which departs every hour on the hour from outside the White Tower. It is known as the ‘Cultural Route’.
The complete journey lasts about an hour although you can get off at any of the 15 stops and includes the Old Town (Ano Poli) on its route. The conductor provides a live commentary during the trip and images of the inside of important buildings are displayed on a screen. The fare is only 2 Euros provided you stay on the bus, if you get off you’ll need to pay again when you get back on.

Thessaloniki is home to a wealth of Byzantine monuments, fifteen of which are listed by UNESCO as World Heritage Sites. In addition there are impressive architectural structures dating from the Roman and Ottoman Empires. Many buildings were destroyed by the Great Thessaloniki Fire of 1917 whilst others suffered from heavy bombing during the Second World War. Ongoing restoration work has returned most monuments to their former glory.

Aristotelous Square: Located in the heart of the city, this seafront square is surrounded by impressive buildings as well as plenty caféss and restaurants. It’s the ideal spot to meet up with fellow passengers and is the best place in town for people watching.

Insider Tip: One of the highlights of Thessaloniki for food lovers is a visit to its open-air food markets. The oldest one in the city is called Kapani market which is right next to Aristotelous Square. It’s popular with locals who buy their fruit, fish, meat and spices here in what is a unique shopping experience for visitors. 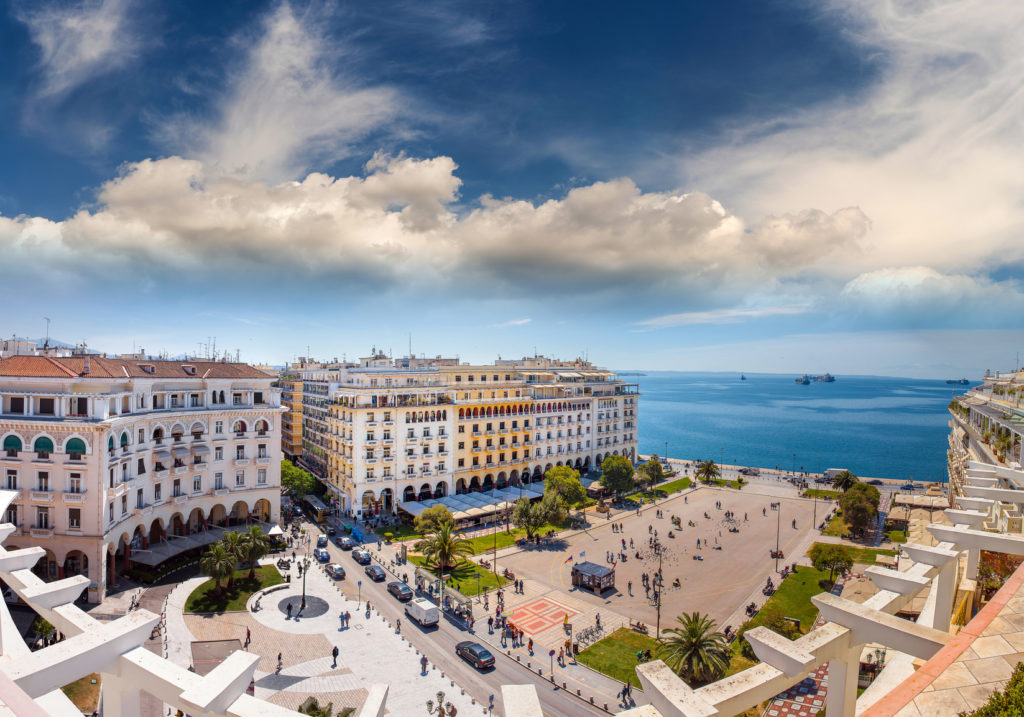 White Tower of Thessaloniki: If you continue walking along the seafront from Aristotelous Square you’ll reach this iconic tower in about 15 minutes. Historically it once served as the south-eastern tower of a large fortification which is now a popular tourist attraction where you can learn all about the many conflicts it has been part of over the centuries. You can walk to the top of the tower for great views of the city.

Old Town: Located some 15 minute’s walk inland from Aristotelous Square is ‘Ano Poli’ which is a a UNESCO World Heritage Site in its own right. This is the oldest and most traditional part of the city which avoided the worst of the Great Thessaloniki Fire so maintaining much of the original structure of its historic buildings. You can walk there if you don’t mind the uphill climb otherwise just hop on the city bus (number 22 or 23). The city’s acropolis is located in this upper town as well as Thessaloniki Castle and the best of what remains of the city walls. From the highest point you might even catch a glimpse of Mount Olympus in the distance.

Church of Agios Dimitrios: Dedicated to the city’s patron saint, this is Thessaloniki’s most revered church which has a history dating back to 4AD when it was no more than a small chapel constructed on the ruins of some Roman baths. Over the centuries it was redeveloped numerous times until it became a grand Basilica which has been rebuilt since it was burnt down during the Great Fire. 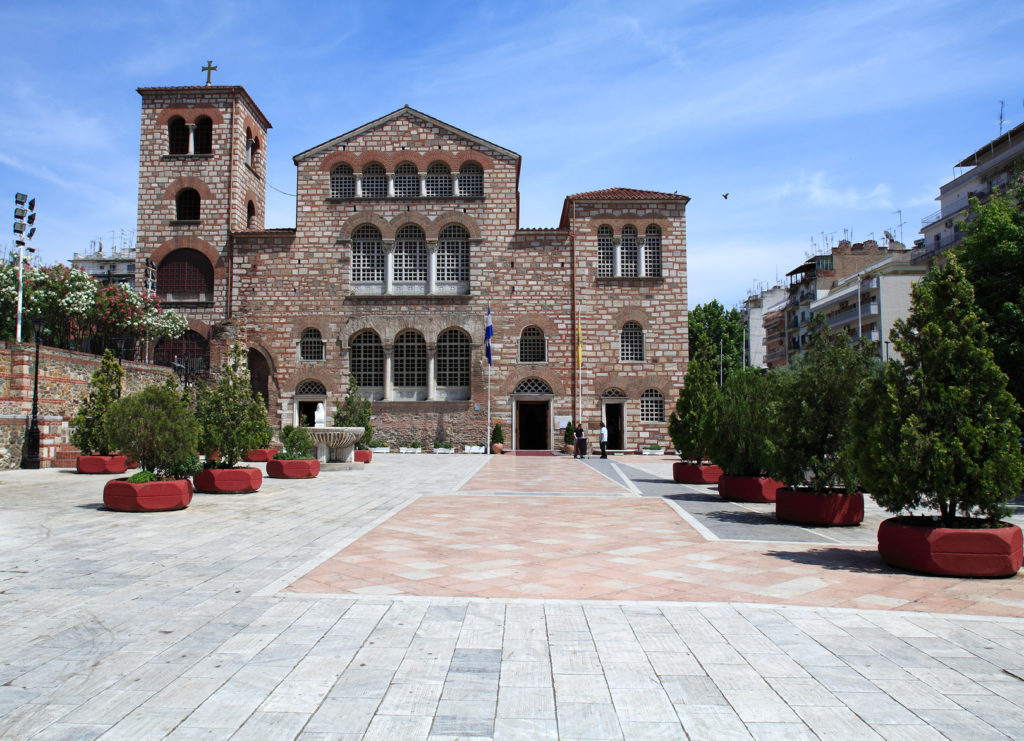 Church of Agia Sofia: Another victim of the 1917 fire this Byzantine church is best known for its beautiful dome whose restoration was only completed in 1980. It is considered to be one of the region’s most important religious sites. 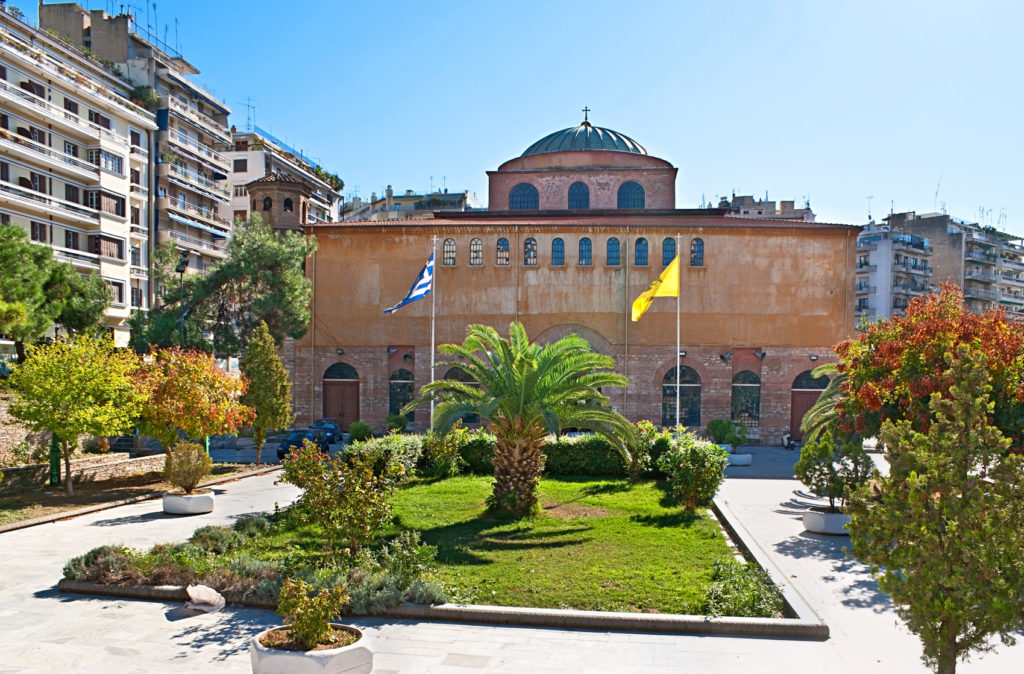 Archaeological Museum of Thessaloniki (Manoli Andronikou 6): The city’s top museum is home to an impressive selection of artefacts collected from the Macedonian region dating back to the Stone Age. Whilst there are impressive exhibits from the Ancient Greek, Roman and Byzantine periods, it is often the exhibition of gold jewellery which most impresses visitors.

Museum of Byzantine Culture (2 Leoforos Stratou): Located right next to the Archaeological museum in the city centre, this is Thessaloniki’s other top museum. Its ten large rooms exhibit items from the Byzantine period which depict the history and culture of the times.

One Night in Thessaloniki

If your cruise itinerary allows for an overnight stay in Thessaloniki you shouldn’t have any problem finding ways to entertain yourselves. As a former European Capital of Culture which is generally considered to be Greece’s cultural capital there are performances throughout the year in its numerous theatres. In addition the city claims to have more bars and caféss than any other city in Europe and is well known for its lively nightlife.

The Thessaloniki Concert Hall is a major venue for all kinds of cultural events including opera, classical concerts, ballet and theatre plays. Located in the forest of Seich Sou is the Forest Theatre (Theatro Dassous) which overlooks the city and puts on an impressive calendar of open-air summer concerts. Other major venues include the Royal Theatre and the National Theatre of Northern Greece. You’ll need to check their individual websites in advance to find out what’s on during your visit. Otherwise drop into the Tourist Information Office in Aristotelous Square for a details of current events taking place in the city.

If you’d prefer to spend your night in port at a typical Greek restaurant then head for Dia Xoiros (25 Valaoritou Aristotelous) which is walkable from the ship or just a few minutes away by taxi. It’s a really friendly establishment which serves exceptional Greek cuisine in a cosy environment. Another highly recommended place located near Aristotelous Square is Frutti di Mare (Komninon 20) which is popular for its seafood dishes.