The Austrian capital of Vienna is an undisputed highlight of any Danube River Cruise. Located in the east of the country close to the Czech Republic, Slovakia, and Hungary, this UNESCO World Heritage City is best known around the world for its legacy of classical music and its rich culture which continue to attract millions of visitors every year. If your cruise company offer the option of an extension at the beginning or end of your cruise be sure to take it as there’s so much to see and do in this most charming of cities.

The Port of Vienna is one of the largest on the Danube River due to the amount of cargo passing through it. Its passenger terminal at Reichbrücke to the north of the city is also one of the Danube’s largest. River cruise ships cannot dock in the city centre because the Danube had to be diverted to the east of Vienna some years ago as a measure to protect against flooding. Therefore, you’ll most likely embark or disembark from this Reichbrücke terminal which is served by the U-Bahn metro network with trains into the city centre taking just 7 minutes.

If you’re beginning or ending your river cruise in Vienna you’ll most likely be passing through the city’s international airport which lies approximately 20km south-east of the city centre. Transport to and from the airport is easily available by means of the Airport Bus or by the commuter train on line 7 of the S-Bahn urban rail system. Both take around 30 minutes to the city centre. There are faster inter-city trains and a City Airport Train (CAT) which gets to Wien Mitte station in about 15 minutes.

Considering the luggage you’re likely to be carrying you’ll probably be better off taking a taxi or for the utmost convenience you can pre-book a private transfer. Shuttledirect drivers will meet you on arrival at Vienna Airport and transport you safely to city centre hotels or to the river cruise terminal. 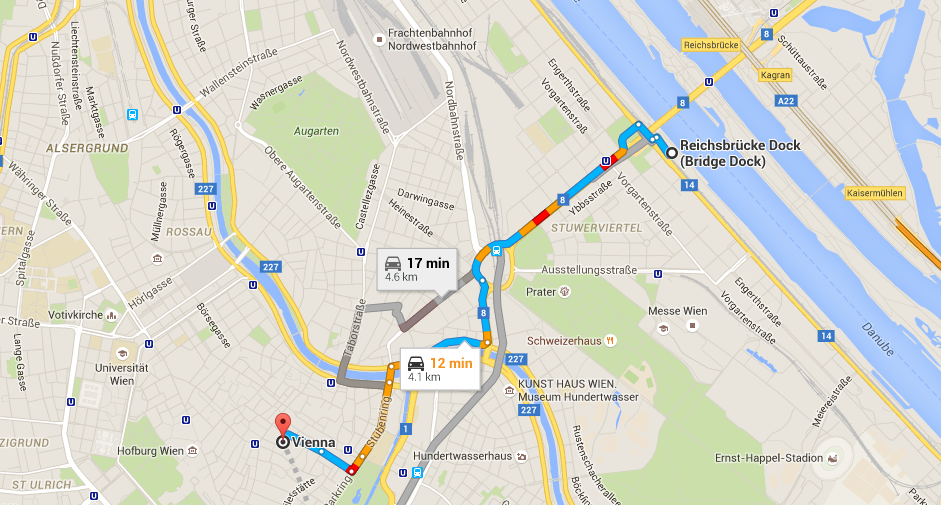 Getting Around in Vienna

In spite of the vast number of attractions that Vienna has to offer, it’s a remarkably compact city in which visitors can get to many of the main sights on foot. During a short visit you’ll most likely spend all your time wandering around the Innere Stadt district which lies within the city ring road (Ringstrasse).

If you do want to go further afield you’ll find a well organised and efficient public transport system which integrates bus, tram and metro services. Just purchase the 24-hour ticket for the best value on all these modes of transport. A simple tourist solution to getting around is to use the hop-on, hop-off bus service which includes most of the city’s highlights on its route.

Insider Tip: The Vienna PASS is a useful sightseeing card which includes the hop-on, hop-off bus tour and entrance to more than 60 0f the city’s main attractions. There’s also an optional travelcard providing access to all modes of city transport.

For something completely different take a horse-drawn carriage tour of the old town or get on one of the city bikes which can be collected and deposited at stations all over the city without charge.

Schönbrunn Palace: This Baroque palace was built on a piece of land acquired by Holy Roman Emperor Maximilian II in 1569. It is one of Austria’s most important buildings both architecturally and historically which originally served as an imperial summer residence for the Habsburg dynasty. Today it is one of Vienna’s most visited tourist attractions thanks not only to the building and the grounds but also the fact that the world’s oldest zoo (Tiergarten Schönbrunn) is located within its grounds. Classical music performances are frequently held in the palace halls. 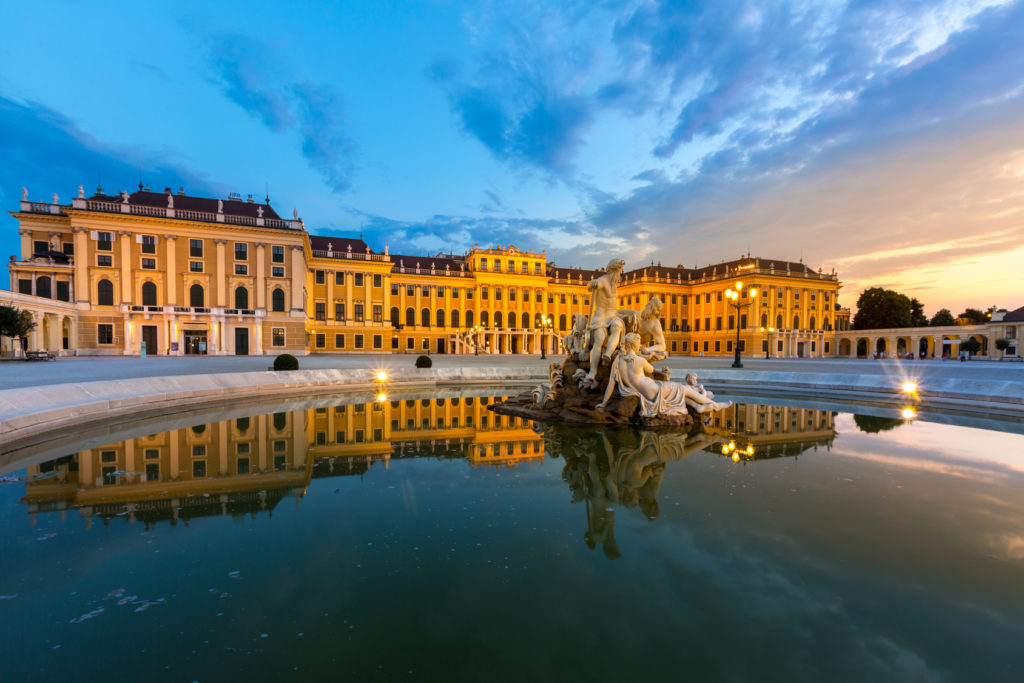 Explore the opulent interior and the lush gardens and grounds of Vienna’s Schönbrunn Palace.

Hofburg Palace: Dating back to the 13th century, the Hofburg Palace has long been home to many powerful figures in European history. These include Habsburg monarchs and leaders of the Austro-Hungarian Empire. Today it is the official residence of the Austrian President.

Spanish Riding School: Beautiful Lipizzaner horses have been bred in this region since the 16th century. In the Spanish Riding School they learn the art of classical dressage for which they are famous the world over. Visitors can attend performances at the Winter Riding School (Winterreitschule) in the Hofburg Imperial Palace.

Insider Tip: Summer temperatures in Vienna can be surprisingly hot with maximums of over 38 ºC (100 ºF) recorded. In addition, sudden rainfall is not uncommon so be sure to pack accordingly.

Vienna Boys’ Choir: This is probably the oldest and most famous boys’ choir in the world. It has about 100 members between the ages of 10 and fourteen. Every year they perform concerts which are seen by an estimated half a million people in venues locally and worldwide. They often perform on Sundays at the Holy Mass in the Imperial Court Chapel (Hofburgkapelle) of the Hofburg Palace. Alternatively, you can pre-order tickets for performances at the MuTh Theatre which is next to the Augartenpalais in the centre of Vienna.

The Prater: The Wurstelprater amusement park in Leopoldstadt was created under the Austrian Empire, opening to the public in 1766. Whilst it is home to old-world roller coasters and similar attractions, its most famous attraction is the Wiener Riesenrad which is a giant Ferris wheel. When it was built in 1897 it was the largest in the world and remains one of Vienna’s most iconic structures. There is no entrance fee to the park which has plenty to offer other than its rides, most notably a fine selection of typical Viennese restaurants.

Insider Tip: For lunch it’s a good idea to head for the city’s historic food market known as the Naschmarkt. It is located just across the river from the main tourist centre and is home to around 120 market stalls and a wide variety of international restaurants representing all kinds of cuisine from around the world. 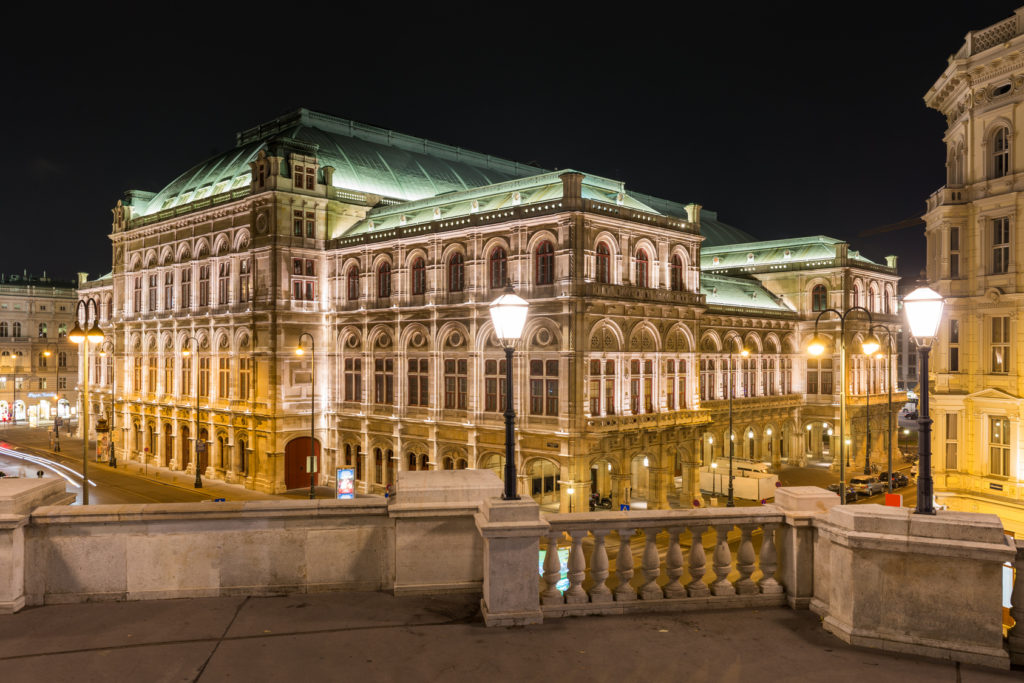 Vienna State Opera: The Wiener Staatsoper was originally known as the Vienna Court Opera under the Habsburgs but became the State Opera under the First Republic of Austria. Its orchestra is well known for providing members to the Vienna Philharmonic. There will most likely be opera or ballet performances during your visit and if you haven’t pre-booked tickets you can often get ‘standing-only’ tickets at the last minute. This section of the audience is notorious for airing its vociferous assessment of performances both good and bad!

St. Stephen’s Cathedral: Archaeologists believe that this was a religious site as far back as the 4th century though the first structure of the Cathedral we see today can be traced back to 1160. Many restorations and developments over the centuries led to what is today perhaps the city’s most recognisable attraction thanks largely to the colourful tiles which adorn its roof and can be seen from miles around. Visitors can walk to the top of the south tower for spectacular views over the city.

Vienna’s Museums: In a city awash with stunning art galleries and museums you’ll be hard pressed to find time to do justice to what’s on offer during a short visit. If you only have time to visit one then go to the Kunsthistorisches Museum (Museum of Fine Arts) which is the largest art museum in Austria. It houses the stunning art collection of the Habsburgs. The museum dates back to 1891 when it was opened by Emperor Franz Joseph I along with the natural History Museum which lies within the same group of buildings. The Albertina and Belvedere are two others well worthy of a visit if time permits.

Insider Tip: You must visit a traditional Viennese coffee house whilst you’re in town. You’ll find them scattered all over the city serving coffee with an extensive selection of delicious cakes. Some also offer lunch and dinner menus. One of the oldest in the city is Café Frauenhuber (Himmelpfortgasse 6) which is famous as a venue where both Mozart and Beethoven are known to have performed.

Austrian National Theatre: Known locally as the Burgtheater, this is home to one of the world’s most important German language theatres. The first performances took place in 1741 and continue to this day using the same traditional format.

Zentralfriedhof: Lying on the outskirts of Vienna this huge cemetery with its Art Nouveau architecture has become a tourist attraction in its own right. The most visited of the graves are those of the city’s celebrated musicians including Beethoven, Brahms, Schubert and Strauss. There’s also a memorial to Mozart who was buried in the nearby St Marx cemetery. 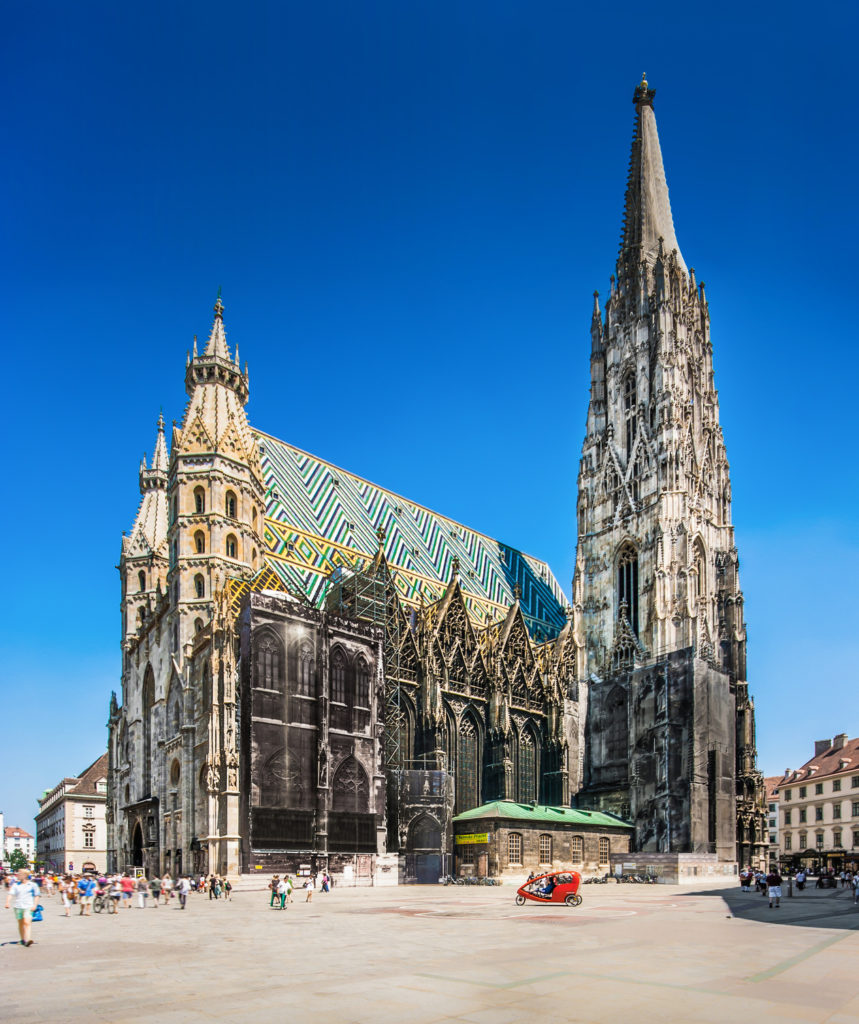 You’ll have plenty options of things to do during your evenings in port in what is one of Europe’s great cultural capitals. With more than 70 theatre venues to choose from and a year round calendar of events there’s always something to see. Besides theatre you’ll also find a wide selection of classical music and opera performances taking place in Vienna’s many historic venues.

If you happen to be in port in late May you should check out the dates of the Summer Night Concert Schönbrunn (Sommernachtskonzert). This is a free, open-air concert performed by the Vienna Philharmonic in the grounds of the Schönbrunn Palace. It attracts over 100,000 people and is broadcast live in the USA via the Public Broadcasting Service.

If attending such cultural events isn’t a priority then a visit to the world’s oldest amusement park, the Prater, is a pleasant way to spend an evening for all age groups. There are cafés
and restaurants in the grounds of the park but for finer dining you’d be advised to head to one of the city’s typical Viennese restaurants where you can sample traditional local cuisine such as schnitzels or goulash. Highly recommended are Bitzinger’s Augustinerkeller (Augustinerstraße 1) where you can dine in their cellar and the historic Figlmüller Restaurant (Wollzeile 5) which has symbolised Viennese cuisine for more than a century.