The warm glow of amber has been appreciated by people and used in jewellery since Neolithic times. It has other uses too: as early as the fourth century BC, historians have noted how the tribes around the Baltic Sea made use of the fossilised tree sap for fuel, as a currency of exchange, and to adorn themselves and their clothing.

But since its earliest days, the amber trade has been localised on the northern edge of continental Europe. One city in particular, the Polish port city of Gdańsk – known as Danzig during a former life – has a rich seam of connections with the precious resin.

So if you want to follow the trail, these are the must-sees.

The main attractions here are the exhibitions dedicated to Gdańsk’s most famous export. Chief among them, the largest one-piece amber sculpture in the world: the 2.5kg, “A Naked Woman after A. Rodin”.

Top Tip: This attraction does involve a lot of stairs. If that’s not for you, feel free to pick up the tour at the next stop…

From its vantage point by the famous medieval crane on the Motława river, this state-of-the-art facility houses some of Poland’s most revealing historical exhibits. They really give you a flavour of the founding of this city in the tenth century, and provide a good overview of the various regimes that have been in charge over the years, as seen in the artefacts they leave behind.

They’re understandably proud of their “Baltic Gold” here, and you can see why in this permanent exhibition, which traces the changing history of the area through its relationship to amber. Highlights include:

Affiliated with the city’s main university, this set of exhibitions focuses on the more Jurassic Park-like aspects of the ancient resin. Find out how bugs from the Earth’s distant past got caught in sap flowing from trees, trapped and preserved there in near-hermetic conditions. The oldest fossil resins are 230 million years old, while the most recent are still a venerable 5 million years.

Top Tip: It’s advisable to make sure this is open before making the trek, so either check the website, or email bursztyn@ug.edu.pl.

Nearly obliterated during World War II, the basilica was rebuilt in 1973 based on original Gothic designs. It’s most famous to Poles as the place where Lech Wałęsa and Solidarność sought sanctuary under martial law in the 1980s. Inside, though, the otherwise austere interior is illuminated by the Amber Altar: a vivid tribute to the workers who died in strikes against Soviet rule in 1970, with white vestments strewn with golden gems, and a large translucent amber cross. An uncommonly humbling sight against the exposed brick and metalwork.

Nestled among the houses of the old town are myriad examples of how the amber trade remains a strong part of Gdańsk’s identity. Artisans still work the material in traditional ways here, and the hospitable people are only too happy to give an insight into how they see their traditions. Specialities include:

The city comes alive for three weeks in August, retaining a tradition stretching back to the Middle Ages, and revived after the hardships of the twentieth century in 1972. Stalls fill the streets selling traditional handicrafts, trinkets, souvenirs, and regional food like pierogi (a personal favourite) and bigos, a local hunter’s stew with mushrooms and sauerkraut or cabbage.

No market here would be complete without the orange stuff coming in somewhere, though. A full day of the festivities is dedicated to “the good stone”, with presentations, fashion shows and more.

Top Tip: Keep an eye out for happenings and World Record attempts: previous japes include the world’s longest bead-strings and a button, measuring 1 foot, made from light-yellow amber. 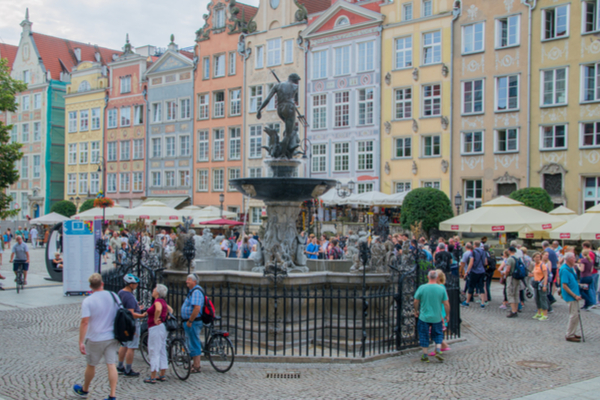 Can’t make it for summer? Then try spring: last March was the 25th annual Amberif International Fair of Amber, Jewellery and Gemstones. Around this industry-leading trade fair are scores of events celebrating and cementing its place in the world jewellery firmament. Check out the website for the latest events.

Hotel Bonum – Perfect for two travellers, this cosy, clean Old Town hotel will site you right in the middle of everything.

Hotel Artus – 50m from Long Market, boasting an excellent restaurant, and some of the best views anywhere in the city.

Basilica Apartment Mariacka Gdansk – If you prefer to self-cater and forage for your own sustenance – as I do – then this is hands-down the best you can find in town. Faultless.

Cheap flights to are easy to come by to Gdańsk (GDN), with return flights available for under £30 from London, Manchester, Belfast or Glasgow, in upwards of two hours direct. Alternatively, KLM, Lufthansa and other national providers will get you there in a modicum of style.

Once you’re there, I’d advise a Shuttle Direct private car transfer for the 14km into the city (Polish can be a tricky language to read if you’re not accustomed, so organising beforehand removes a lot of the strain).

Shuttle Direct is one of Europe and North Africa’s foremost experts in local, professional airport transfers, with almost 40 years’ experience to get you where you need to be.