Standing on the Garonne River in the Aquitaine region of France, the city of Bordeaux is famous worldwide as the capital of the country’s largest wine producing region. This is not surprising when you consider that there are more than 7000 châteaux in the region which produce around 700 million bottles per year between them.

Whilst cruise ship passengers can enjoy a tipple in the city’s stylish wine bars and take a tour of the vineyards of Saint-Émilion and Médoc there’s more to Bordeaux than its award-winning vintages. Relatively recent times have seen the regeneration of the city’s old town and waterfront such that the whole area has been listed as a World Heritage Site by UNESCO.

Cruise ships visiting Bordeaux will dock at any one of three locations depending on their size:

Le Port de La Lune: The most fortunate passengers will arrive on small vessels which can dock on the west side of the river at the Port de La Lune terminal near the city centre. Located at the Quai Louis XVIII near the Esplanade des Quinconces and Place de la Bourse this quay has two berths for ships with a maximum length of 255 metres. Once cruise passengers have disembarked they can easily discover the city’s main attractions on foot. Passengers who prefer to get around on public transport can jump on one of the city trams which run alongside the dock. The nearest stop is Quinconces Fleuve.

Passengers arriving on these smaller vessels should ensure that they are on deck as they approach Bordeaux so that they can see the impressive Jacques Chaban-Delmas vertical-lift bridge in action. 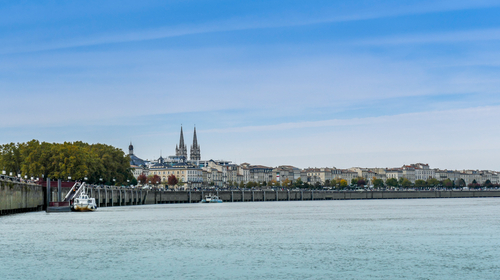 Terminal Croisières de Bassens: There is a single berth for larger vessels at Quai Alfred de Vial on the east side of the river at Bassens. This cruise terminal is located in a cargo port which lies 12km down-river (by road) from Le Port de La Lune. There is nothing of interest near the dock so passengers are advised to take a shuttle bus into the city centre .

Le Verdon-sur-Mer: The largest cruise ships dock at Le Verdon-sur-Mer which stands on the tip of the Médoc Peninsula some 100km north-west of the centre of Bordeaux. The drive into the city from this port can take as much as two hours which makes it questionable as to whether it’s worthwhile heading into the city centre of Bordeaux at all. Passengers with limited time in port would be better advised to take a wine tour of some of the vineyards in the Médoc wine region or simply head for one of the excellent local beaches.

Passengers who are beginning or ending their cruise in Bordeaux will most likely be arriving or departing through Bordeaux–Mérignac Airport which lies 15km west of the city centre cruise dock at Quai Louis XVIII. The airport is well served by airlines from all over Europe including budget carriers such as easyJet, Ryanair and Vueling.

There’s an airport shuttle bus from Terminal B to Gare de Bordeaux Saint-Jean train station in the city centre every 30 minutes. Plans are also going ahead to connect the airport with the city centre by way of the tram network in the foreseeable future.

Plenty taxis are available outside the arrivals terminal, otherwise passengers can pre-book private transfers from Bordeaux Airport to the cruise port as well as to city centre hotels and other destinations in the Médoc region and in the Dordogne valley..

Getting Around in Bordeaux

From Le Port de La Lune all the city’s main attractions are accessible on foot. Alternatively, there’s a modern tram network with just three lines covering the central area and an electric bus system which operates within the pedestrianised city centre. Guided walking tours and bicycle hire schemes are other popular ways to get around.

Passengers who arrive at Bassens would be well advised to take a shuttle bus or tour bus from the port into the city centre. Those arriving at Le Verdon-sur-Mer for a day in port should consider taking a wine tour of the Médoc region or going to the beach rather than taking a time-consuming journey into the city centre.

Le Port de La Lune could hardly be better situated for providing cruise ship passengers with easy access to the main sights of Bordeaux’s old city which is recognised in its entirety as a UNESCO World Heritage Site. A short stroll from the ship through Place des Quinconces leads to Le Triangle-d’Or which is home to some of the city’s most impressive 18th century buildings and squares. 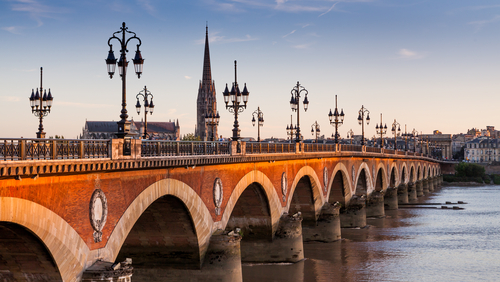 The architectural highlight of the area is the Grand Théâtre (Place de la Comédie) which opened its doors to the public in 1780 and is home to the Opéra National de Bordeaux. Just east of this grand opera house is the equally impressive Palais de la Bourse (17 Place de la Bourse) which is probably the city’s most recognisable sight. Guided walking tours of the old city are highly recommended and depart from the nearby Tourist Information Office (12 Cours du 30 Juillet) twice daily.

Insider Tip: A great place for lunch in the company of Bordelais is La Brasserie Bordelaise (50 Rue Saint-Rémi) which is located between the Grand Théâtre and Place de la Bourse. This popular establishment is a great place to try excellent Bordeaux wines and tasty local dishes in a lively local environment. 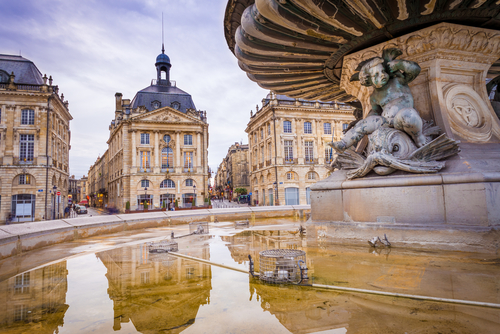 Another major tourist attraction which lies just south of the Golden Triangle is the city’s 11th century Cathédrale Saint-André (Place Pey Berland) . Next to it is the attractive Hôtel de Ville building which continues to serve as the city’s main administrative centre. Nearby is the Musée des Beaux-arts (20 Cours d’Albret) which is a fine arts museum displaying exhibits dating back to the Renaissance period. Another interesting museum is the Musée d’Aquitaine (20 Cours Pasteur) which is dedicated to the city’s colourful history going back to prehistoric times.

Some of France’s most prestigious wine producers lie within a short drive of the city centre. Such proximity to the cruise ports ensures that the vast majority of passengers who decide to take a shore excursion will choose a wine tour of some of the local vineyards. The two most popular destinations are as follows:

Saint-Émilion: Located on the banks of the Dordogne river some 45km east of Le Port de La Lune, this beautiful town is listed as a World Heritage Site.
Médoc: Heading north-west from the city leads to what is one of the world’s best-known wine regions. Its vineyards are centred around a number of villages on the west bank of the Gironde estuary such as Pauillac which lies 50km north of Le Port de La Lune. Passengers from cruise ships which dock at Le Verdon-sur-Mer have easy access to the Médoc wine region.

There are plenty wine tours to choose from which are made available by cruise lines, local tour operators and the city’s main tourist office.

One Night in Bordeaux

If you’re fortunate enough to have an overnight stay in Bordeaux you’d be well advised to spend your extra day in port on a wine tour to Saint-Émilion or the Médoc region. Highly recommended are the daily tours from the Tourist Office (12 Cours du 30 Juillet) which is walking distance from the dock at Le Port de La Lune.

An evening in port would be well spent enjoying a gourmet cruise along the city’s waterfront which allows passengers to view Bordeaux by night whilst enjoying dinner on board. Dinner cruises depart from Quai des Chartrons which is a short walk along the river to the north of the cruise dock. Alternatively, for passengers who prefer a night on dry-land, there are countless restaurants in Bordeaux dedicated not just to French cuisine but to a wide selection of world foods.