The Italian island of Sardinia is the second largest in the whole Mediterranean region. Lying south of Corsica and west of mainland Italy it has a rich history dating back to prehistoric times. Reminders of the many civilisations which have settled here including the Phoenicians, Carthaginians and Romans are visible today at a number of historic sights around the island. An interesting reminder of the past is evident in the north-western town of Alghero where the people still speak Catalan, a legacy of having fallen under the control of the Aragonese-Spanish for almost four centuries.

Whilst some smaller cruise lines dock at Alghero, the majority of cruise operators head for Cagliari which is the island’s main port. Located on the south coast, Cagliari is the busy capital of Sardinia with frequent ferry services operating to the mainland and Sicily. Cruise ship passengers can enjoy a pleasant day in port wandering around the attractions of the nearby Castello district or take a short excursion to one of the important archaeological sites located within a short distance of the city. 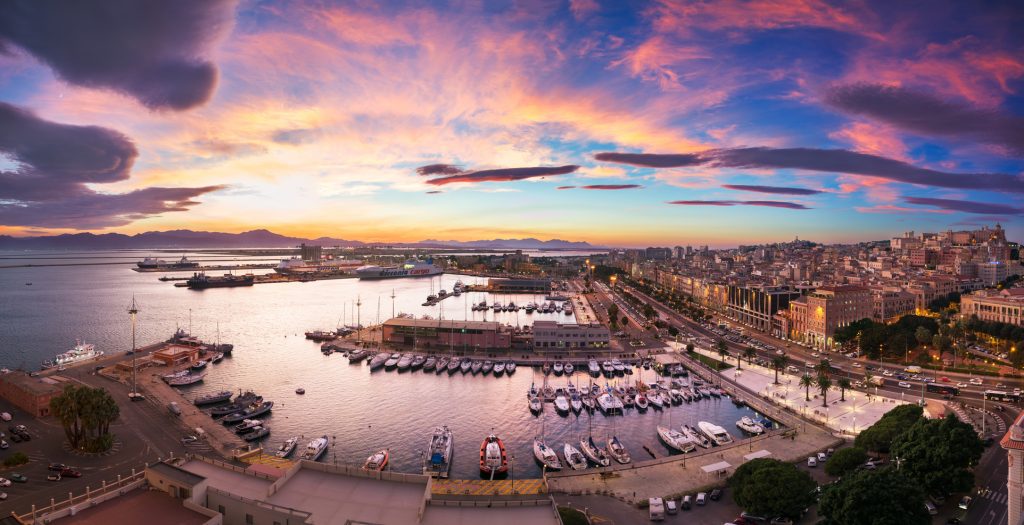 The Port of Cagliari was founded as far back as 700 BC by the Phoenicians and developed into an important trading post under the Romans. Today it is one of the Mediterranean’s largest seaports dealing with vast quantities of cargo and ferry passengers. In 2017 a total of 163 cruise ships visited the port bringing 430,000 passengers to Cagliari. Ships usually dock at the Molo Rinascita which is less than 2km from Piazza Costituzione in the historic Castello district. 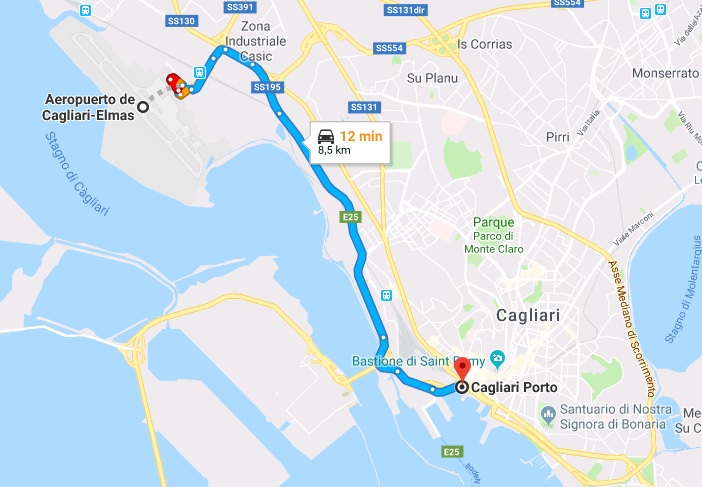 Passengers who are beginning or ending their cruise in Cagliari will most likely be travelling through Cagliari Elmas Airport which lies just 9km north-west of the cruise port. There are frequent train service into Cagliari from the nearby Elmas-Aeroporto railway station as well as an airport bus and taxis which serve downtown destinations. Alternatively, passengers can pre-book private transfers from Cagliari Airport to and from city centre hotels or the cruise port.

Getting Around in Cagliari

It is possible to walk out of the port area to the old town but passengers should be very careful when attempting to cross the very busy Via Roma. A preferable option is to take the free shuttle bus provided by the Port Authority to Piazza Matteotti from where bus number 7 runs up the hill into the Castello district.

Health Warning: Please be aware that although the port is only a short distance from most of Cagliari’s main attractions there are many steep hills in the Castello district. Be sure to wear comfortable footwear, maintain a leisurely walking pace and keep well hydrated. 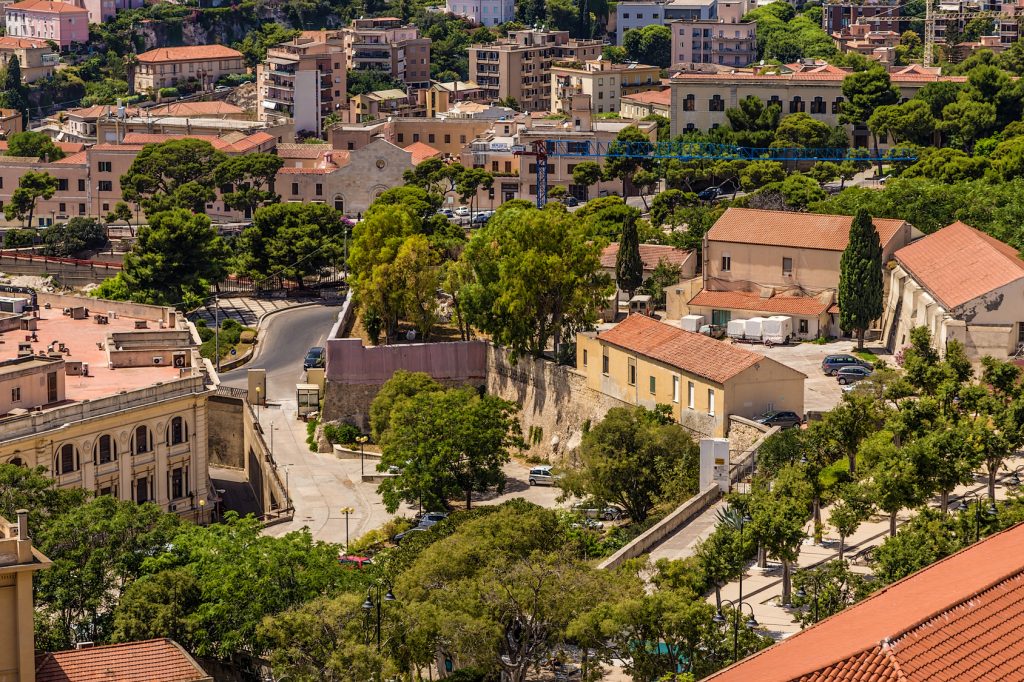 If a self-guided walking tour sounds too strenuous you’ll find a number of alternative modes of transport on offer at the port gates including an open-top bus and shuttle vans which run passengers up to Piazza Palazzo where the Cathedral is located.

Overlooking the port area is the historic Castello district which is home to many of Cagliari’s main tourist attractions. A good place to start your sightseeing is at Bastione Saint Remy which is probably the city’s most recognisable landmark. From the adjoining Piazza Costituzione visitors can take an elevator to the top of this former military fortress from where there are spectacular views across the port towards the Gulf of Cagliari.

A short walk to the north brings you to Piazza Palazzo where the city’s historic Cathedral of Santa Maria is located. Dating back to the 13th century, the stunning architecture and artwork of the cathedral together with its crypt make this the most impressive of Cagliari’s many religious buildings.

Continuing north for just a few minutes along Via Pietro Martini will bring you into Piazza dell’Arsenale which is home to the Museo Archeolagico Nationale which exhibits an impressive selection of artefacts dating back to the Bronze Age Nuragic civilization. 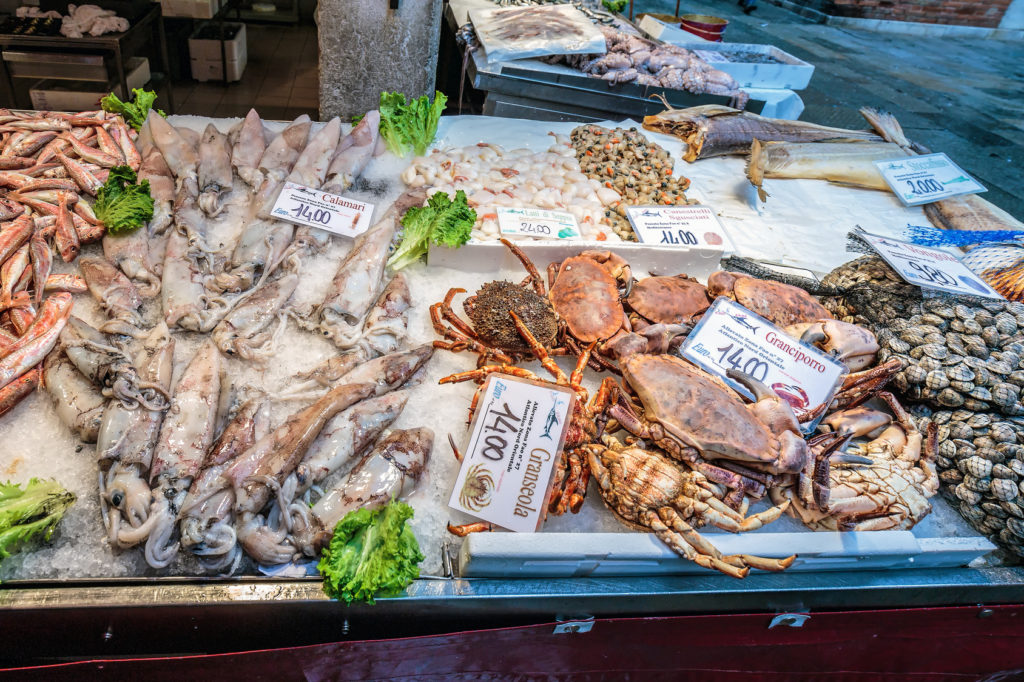 Insider Tip: Foodies visiting Cagliari should make a point of going to the San Benedetto Market (Via Coccu Ortu) which is one of Europe’s great food markets. Built on two floors you’ll find an amazing selection of seafood on the ground floor and many stalls upstairs selling cheese, bread, fruit and many other local foodstuffs.

To escape from the heat of the afternoon, head for the city’s botanical gardens which lie on the western edge of the Castello district. Known as the Orto Botanico di Cagliari this shaded area contains more than 2,000 species of mainly Mediterranean flora. Nearby is the city’s 2nd century Roman Amphitheatre which was originally carved out of the rock face and was able to seat 10,000 spectators at gladiatorial events.

Daytime temperatures in Cagliari during the summer months can reach around 30Â°C (86 F) which encourages some cruise ship visitors to head for the Poetto Beach. Located just 9km east of the port this beautiful city beach with white sand and turquoise water is 6km long and accessible by shuttle bus from the port gates or on a public service from Piazza Matteotti. Beach bars and restaurants are available for lunch. Another interesting site near to this beach is the Parco Naturale Molentargius-Saline which is best known for its diverse birdlife, especially the permanently resident colony of pink flamingos. 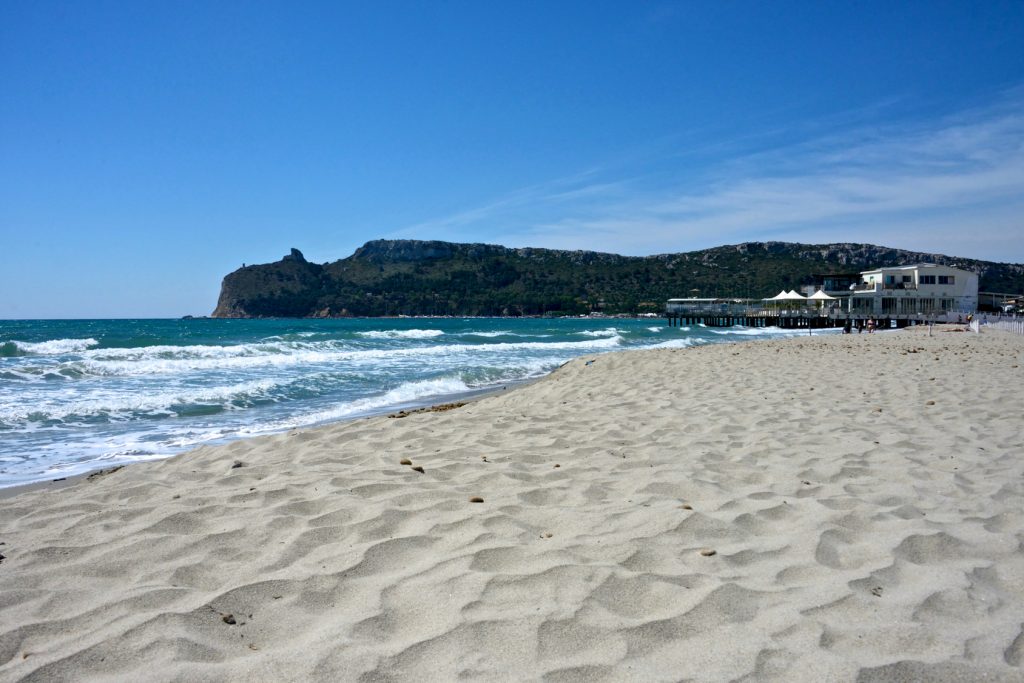 There are a number of shore excursions offered by cruise lines and local operators to archaeological sites beyond the city limits. The most popular ones are as follows:

Roman Ruins of Nora: Located on the small headland of Capo di Pula some 35km south-west of the port is an ancient settlement dating back to the 8th century BC. The site was occupied by the Nuraghic peoples, the Phoenicians and the Carthaginians before the Romans arrived and developed it into a city typical of Ancient Rome. Today it represents one of the island’s most important archaeological sites where visitors can see numerous reminders of the civilizations who have made Sardinia their home over the centuries. The archaeological museum in the nearby town of Pula is well worth a visit. 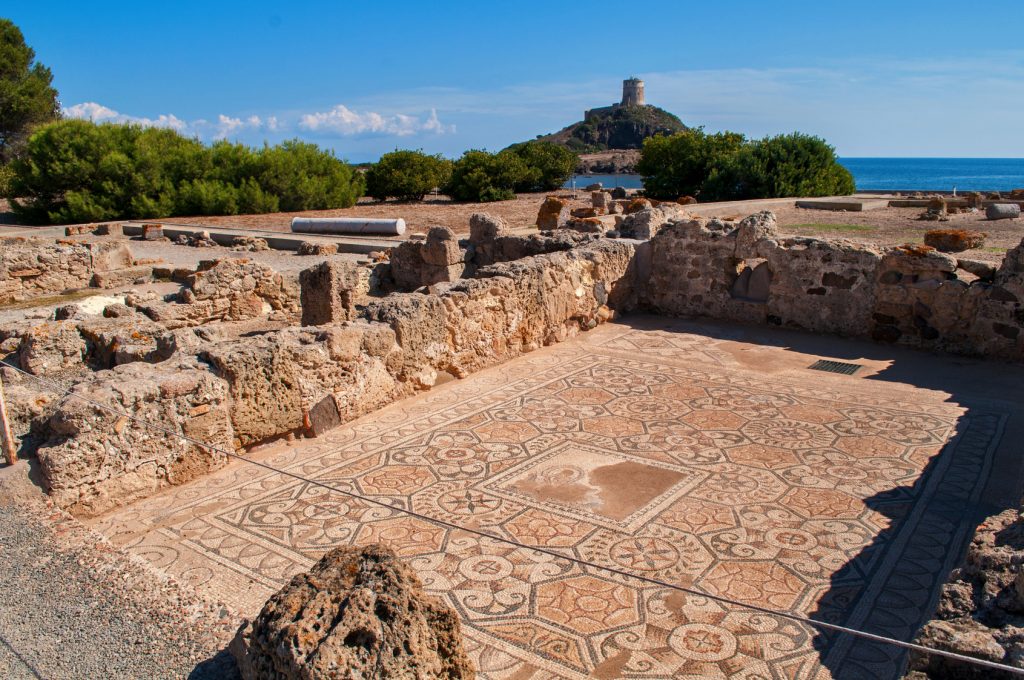 Su Nuraxi (Barumini): This complex located 67km north of the port is a UNESCO World Heritage Site which is home to the best preserved of the island’s Nuragic archaeological sites. Archeologists believe that more than 10,000 such structures once existed around Sardinia dating back as far as 1800 BC.

Sant’Antioco: A little further afield is the island of Sant’Antioco which lies 90km south-west of the port and is best known as a beach resort. Day trippers from cruise ships generally head there via a Roman causeway to visit a number of important archaeological sites including an ancient acropolis, a necropolis from the Phoenician era and several Nuraghe towers.

One Night in Cagliari

Few cruise ships currently spend an overnight in Cagliari although plans are afoot to begin some cruises from the city in the foreseeable future. The Sardinian Sea Port Authority is optimistic that such a move will provide a welcome boost to the local economy as passengers enjoy a few days in the city before their ship departs. 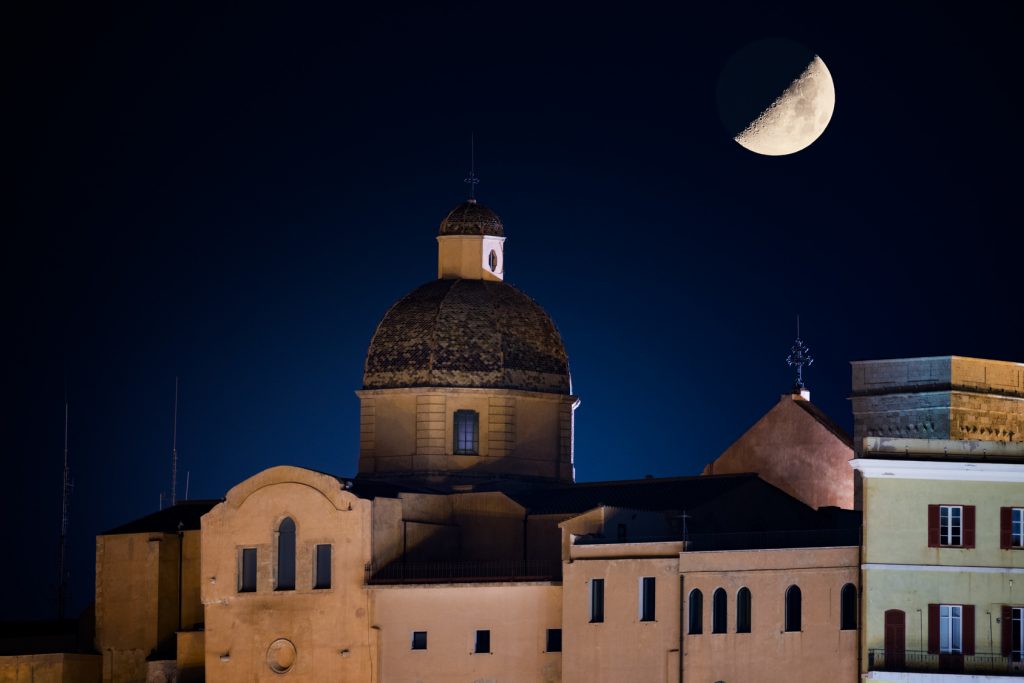 An evening in Cagliari would be well spent watching the sunset from a terrace in the Castello district followed by dinner at a traditional Sardinian restaurant. CaffÃ¨ Libarium Nostrum (Via Santa Croce, 33) is a great spot for pre-dinner cocktails with spectacular views over the port. Highly recommended for local cuisine is Ristorante Ammentos (Via Sassari 120). Otherwise head for Via Sardegna in the Marina quarter which is packed with local restaurants offering a fabulous array of local specialities.