The Port of Civitavecchia lies on the west coast of Italy and is the gateway to the magnificent city of Rome for cruise ship passengers. Such is the wealth of ‘must-see’ tourist attractions in the Eternal City that a one day shore excursion provides little more than a glimpse of what the nation’s historic capital has to offer. For this reason many passengers return to Civitavecchia time and time again on different cruises or add on a cruise extension at the beginning or end of their holiday.

The Port of Civitavecchia, which is commonly referred to as the ‘Port of Rome’, lies almost 90km north-west of the Italian capital by road. Last year almost 2.5 million cruise ship passengers arrived in Civitavecchia with few ships staying overnight. Numerous vessels can dock on the port’s western pier from where the Port Authority provides free shuttle transfers to the cruise ship reception area at Largo della Pace. This journey may take as long as 15 minutes depending on the precise location of your ship. 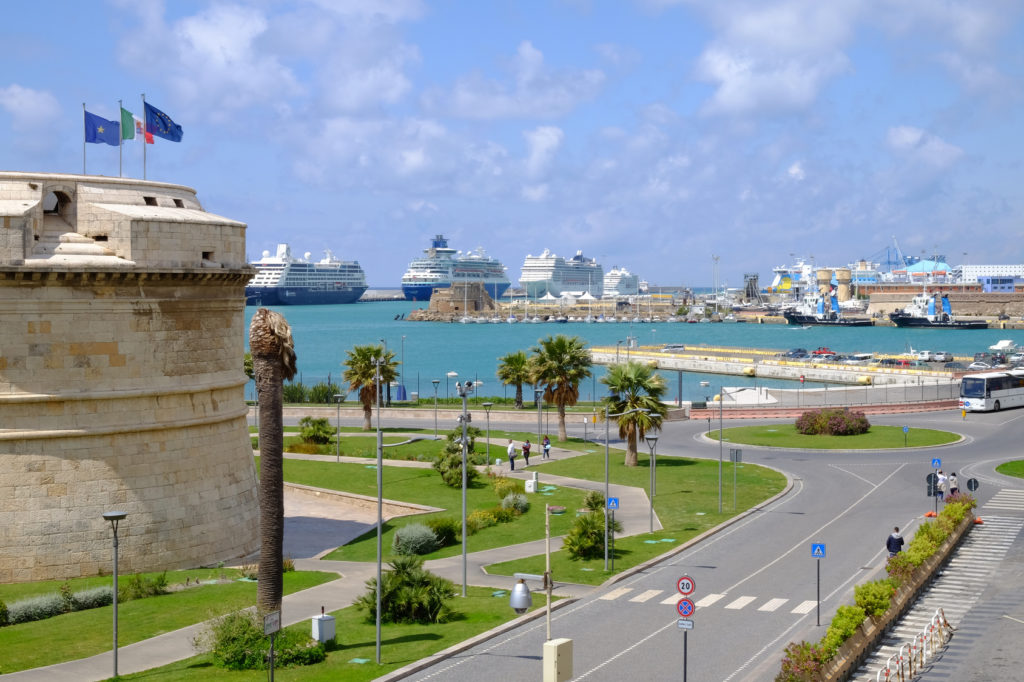 Getting Around in Civitavecchia

The reception area of the Rome Cruise Terminal at Largo della Pace lies just outside the port gates. It is within easy walking distance of Civitavecchia town centre and approximately 1.5km from the Ferrovie Dello Stato train station.

Passengers heading into Rome for the day can either walk to the train station in about 20 minutes or take a local ‘Argo’ bus in about 10 minutes. Passengers from ships berthed closest to Forte Michelangelo may prefer to walk out of the port area at the Varco Fortezza exit from where it’s only a 600m stroll along the promenade to the station.

There are frequent trains running into Rome. The best stations to get off at are Roma San Pietro for St. Peter´s Basilica and the Vatican Museums or Roma Termini for the Spanish Steps and Trevi Fountain. Direct services take less than 50 minutes whilst other may take almost 1.5 hours.

Please note that private hire vehicles waiting outside Largo della Pace are looking to get fares into Rome and will not offer local trips. You can pick up a Civitavecchia municipal taxi at the train station.

Insider Tips: Once in Rome passengers can get around on foot, by taxi or by means of the hop-on, hop-off sightseeing bus. Unfortunately, this tourist bus tends to be slow in the extreme due to Rome’s traffic problems and time isn’t something you’ll have enough of on a day trip from Civitavecchia.

Cruise lines typically offer shore excursions into Rome departing from outside Largo della Pace. Typically these trips prove very expensive and may involve journeys of up to two hours each way depending on traffic conditions. An advantage they offer, however, is that cruise ships will wait for passengers arriving back late from official excursions unlike independent travellers who are late in returning to the ship.

Transport from Fiumicino Airport to Civitavecchia

Passengers who are beginning or ending their cruise in Civitavecchia will most likely be arriving or departing through Leonardo da Vinci Fiumicino Airport which lies 63km along the coast to the south. There’s a train station at the airport with direct services into Rome but not to Civitavecchia so passengers would need to change at Trastevere to get services heading for the port city. Passengers planning on spending a few nights in Rome before their cruise can take the direct Leonardo Express from the airport to Roma Termini Station.

Considering you’ll most likely be travelling with a considerable amount of baggage, a far more convenient option would be to pre-book a
private transfer to or from Fiumicino Airport with Shuttledirect. The drive between the airport and the city typically takes about 50 minutes into the city or to the port depending on traffic conditions. 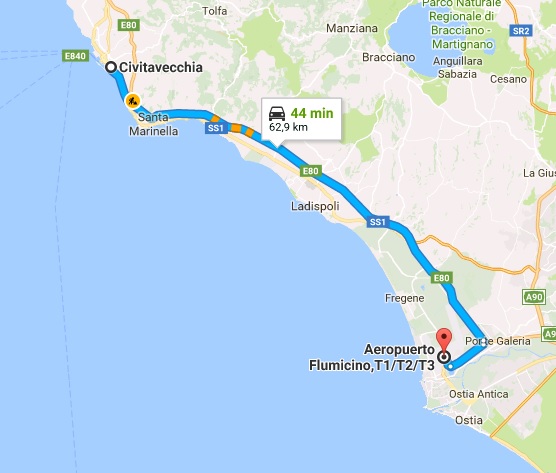 A less convenient option is Ciampino Airport which lies 15km south-east of Rome and is a busy destination for the Irish budget airline Ryanair. Cruise ship passengers arriving here can book private transfers to the Port of Civitavecchia which is a drive of approximately 90km.

Staying in Civitavecchia: If you’ve visited Rome on a previous cruise to the Port of Civitavecchia you might decide to stay locally and spend some time wandering what is a charming town of around 50,000 people. Local attractions include the Forte Michelangelo which was built in the 16th century to defend the Port of Rome and the Old Town which is home to some beautiful piazzas and a fine selection of bars, restaurants and shops.

A Little Further Afield: Just 7km east of town is the well-preserved archaeological site of Terme Taurine. These Roman thermal baths are accessible by bus or taxi from the train station. The nearby Terme Ficoncella baths are the place to go if you’d like to enjoy a dip in thermal waters. Another popular local attraction is the historic and delightful town of Tarquinia which lies 20km north of the port. There are buses heading there from the train station or it’s one stop on the train line.

Visiting Rome: Most first time visitors to the Port of Civitavecchia will be keen to visit Rome. The estimated return travel time of around three hours between the port and the city by road means that visitors will have limited time available to do justice to the Eternal City. With a typical eight hours in port visitors can expect to have little more than four hours to see Rome’s world-famous tourist attractions which include:

If travelling independently it’s a good idea to pre-book ‘Skip-the-Line’ tickets to major attractions in advance so as to avoid wasting time in queues once you get there.