The Spanish seaside town of Calella is a charming holiday destination that offers both the hustle and bustle of cosmopolitan life and the relaxing vibe of a historical town. Though it is close enough to Barcelona for a day trip, you will find that there is plenty to explore if you’re staying in Calella. Boasting many heritage sites and monuments that provide an insight into Catalonian history, the town also offers beautiful beaches, great restaurants and quirky boutiques. It is a unique blend of old and new that is guaranteed to entice any and all culture lovers.

Stroll Through the Old Town

Once an ancient fishing village, Calella has since bloomed into a vibrant town. This heritage can be recaptured, though, if you head over to the Old Town. With stunning old-style Catalonian houses, it boasts a traditional Spanish atmosphere. As you walk down its charming cobbled streets, you can admire the many historical buildings that contribute to Calella’s complex architecture. From the fourteenth-century Casa de los Salvador to the sixteenth-century Casa Sivilla, Calella also claims two stunning chapels and the old Llobet-Guri factory. You will also want to visit the Church of Santa Maria, a neo-classical edifice built in the 1700s. Keep your eye out for Jean de Tours’ sculpture on the baroque doors which depicts the heads of the twelve apostles. 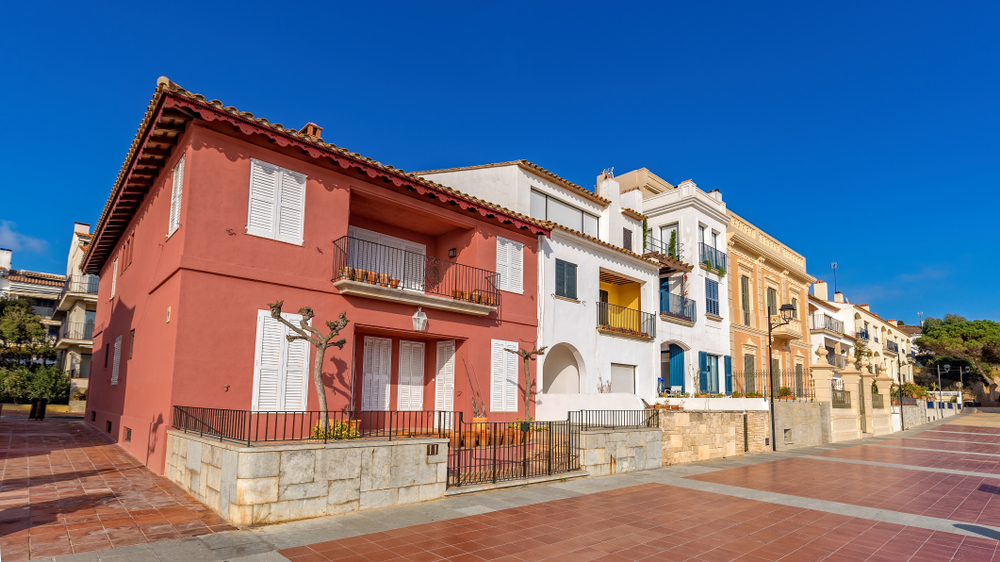 Erected in the nineteenth century, these towers are witness to a large communications system that was used to relay messages to the French border. Using flags and lights as signals, the towers of Calella were part of an elaborate chain that enabled both military and commercial forces to communicate. Receiving signals from the Torre dels Encantats, watchmen in Calella then repeated the code to those in Malgrati Blanes. Though they are now in ruins, these towers served their purpose well and were even used as a lookout for Algerian pirates.

Designed by Marià Parellada, the lighthouse was built between 9 October 1856 and 15 December 1859. Originally, its lamp relied on oil to function. As technology evolved though, oil was quickly substituted for paraffin and petrol, before it finally became electrically powered in 1926. This light, with its 35-mile long beam, is still used today.

It doesn’t just have an interesting history though. The lighthouse also provides unparalleled views of the sandy beaches and warm blue waters. There is a viewpoint just outside the lighthouse that provides a panoramic view of Calella and the mountains of the Natural Park beyond it.

Insider Tip: Climb the lighthouse just before sunset and watch the skies fade to pink and the waters reflect blue and green tones as the sun lowers in the horizon. It is an exceptional sight! You can also go in the late evening and watch the stars light up the sky. 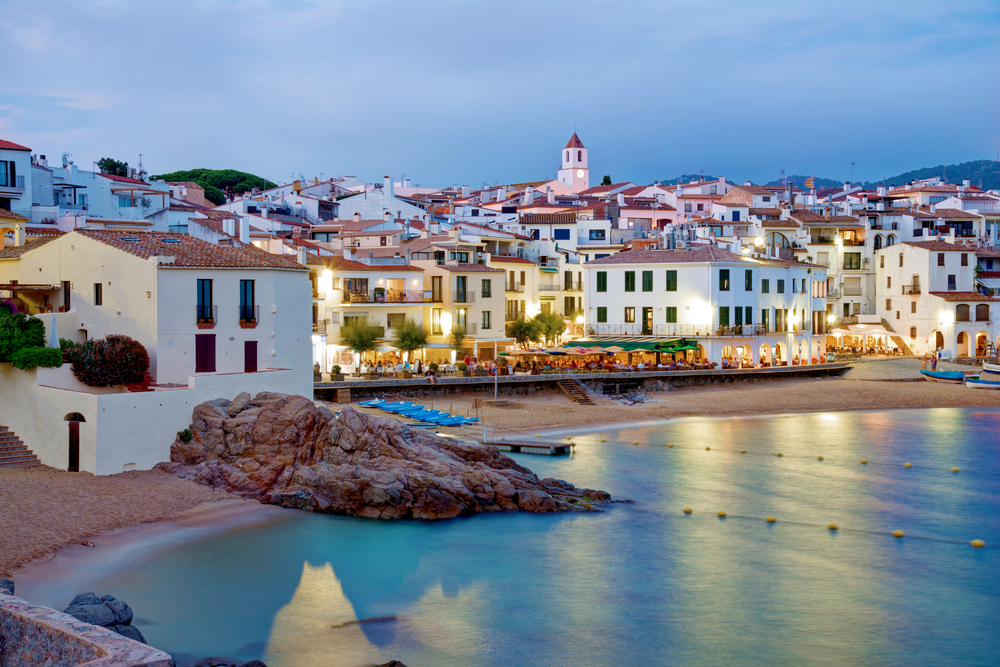 Located in the Old Town, this museum is interesting both inside and out. The building itself was erected in the seventeenth century and served various purposes within the town before finally opening as a cultural facility. The museum boasts 12 exhibition halls that allow you to go back in time and discover the town’s history through various spaces and objects. From ceramics to archaeology, from domestic life to textile machinery, and from clothing to modern pharmacy, it thrillingly depicts the town’s evolution from the Roman period all the way to the modern day. Several historical jackets and embroideries are on display, as well as apothecary pots, densimeters, mortars and precision balances. In the final rooms of the museum, you will also find glass tubes, flasks and ceramic pots that tell the tale of historical Calella.

How to Get to Calella

The journey to Calella is simple and hassle free. The easiest route is to fly to Barcelona Airport. British Airways, Norwegian Air International, Iberia and a range of low-cost airlines offer direct two-hour flights from London. Make sure you also book a private airport transfer with Shuttle Direct. A friendly local driver will meet you outside the terminal, help you with your bags and safely take you to your luxury hotel in less than an hour. If you really want to ride in style, ask for a luxury comfort car! 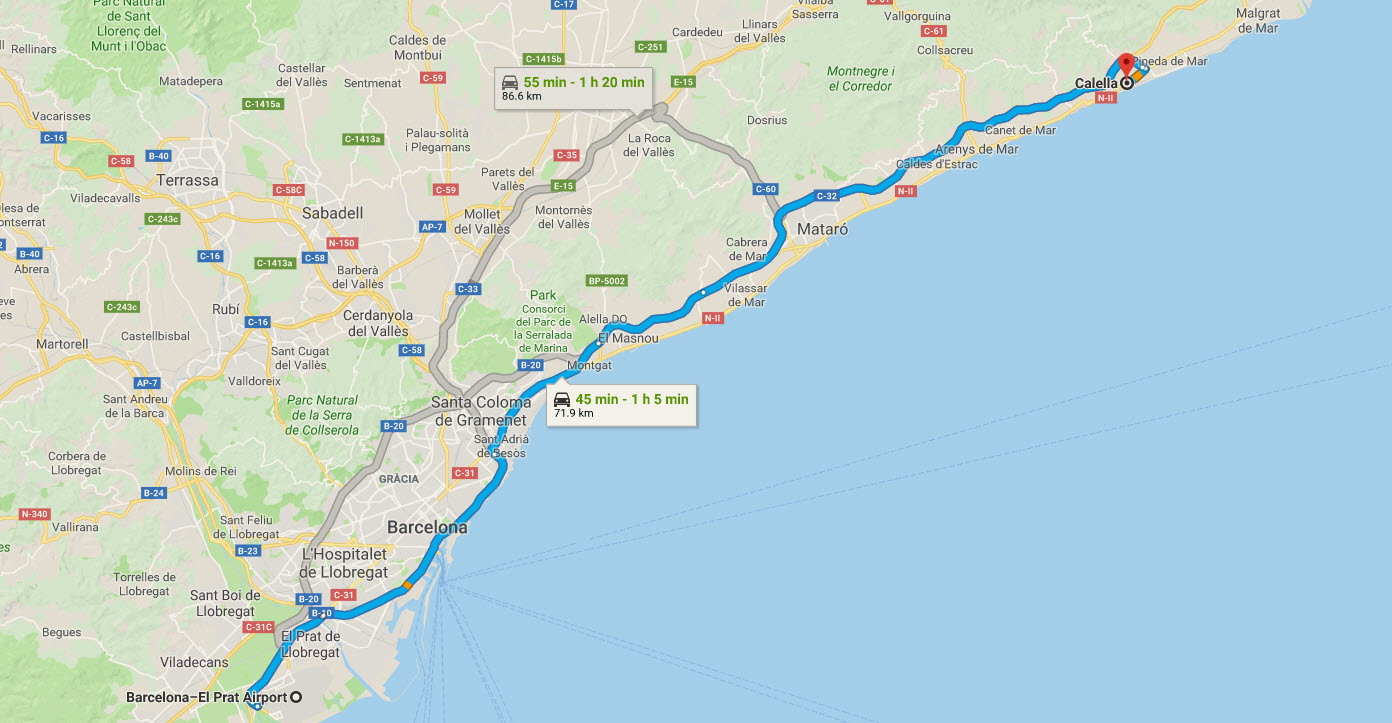 H-Top Amaika: Located just two minutes from the sandy beach, this hotel offers a quiet and peaceful atmosphere while also providing direct access to the town’s centre. It has its own private beachfront, while the guestrooms are spacious and comfortable too. The hotel boasts a large outdoor swimming pool with sun loungers where you can sit back and soak in some glorious sunshine. There is also a bar where you can buy a refreshing afternoon drink.

Sant Jordi Boutique Hotel: Centrally located, this hotel provides direct access to the beach as well as the town’s various boutiques and restaurants. Rooms are stylishly decorated and air-conditioned, boasting flat-screen TVs, private bathrooms and hairdryers. You will also have access to the spa, with its various baths, pools, beauty therapies and massage treatments.

Shuttle Direct is one of Europe and North Africa’s leading transport provider. From luxury private transfers with a comfortable and spacious car to shared or group transfers, you can choose a shuttle that suits your budget. To avoid any last-minute hassle, all your travel arrangements can be made in advance via Shuttle Direct’s easy-to-use website.