Relatively isolated on the western end of the Iberian Peninsula, Portugal is often overlooked by tourist crowds more keen on Spain and France. Furthermore, the tourists who do come to Portugal are far more likely to visit Lisbon than the country’s second city, Porto! However, it would be a mistake to pass up this cultural and historical gem.

If you’re cruising through the waters off western Portugal, a visit to this enchanting oceanside city will be the highlight of your entire trip. We’ve outlined the perfect day out in Porto to help you get the most out of every second of your stopover.

Stopping in Lisbon as well? Here’s our one-day guide to Portugal’s capital. 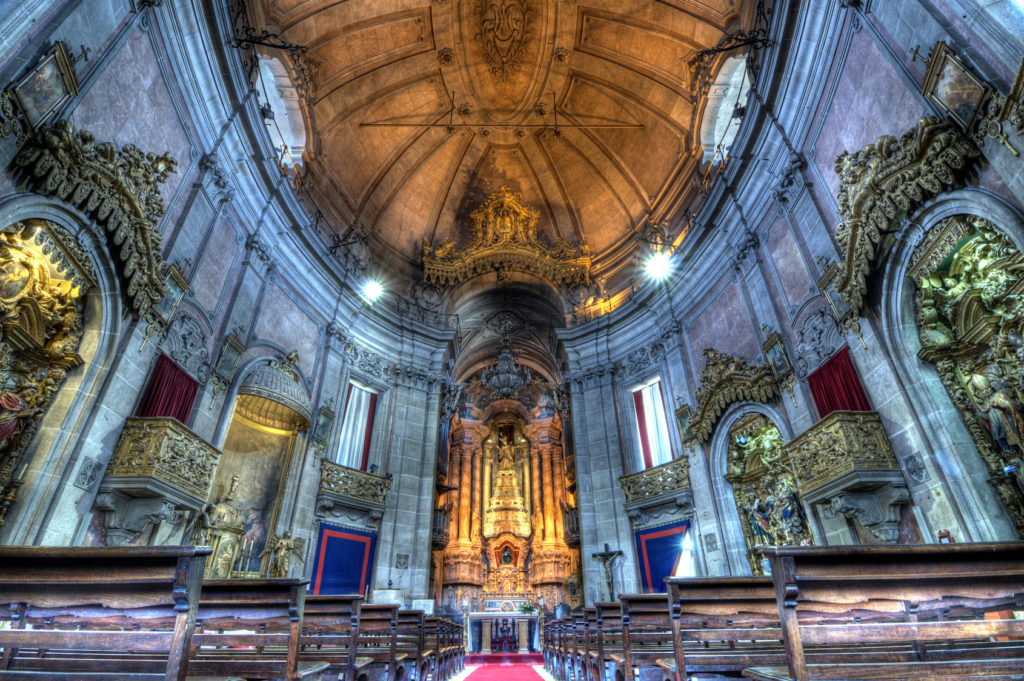 The interior of the Church of the Clergymen in Porto, Portugal.

Visible from multiple points throughout the city, the bell tower of the Igreja dos Clérigos (Church of the Clergymen) is one of Porto’s most recognisable symbols. The 18th century church is almost eye-wateringly ornate, its façade a cascade of Baroque scrollwork, arches, columns, and symbolism. The 75-metre bell tower is similarly ornate, crowned with an orb and cross. Inside a staircase spirals to the top, where a viewing platform offers spectacular panoramic views of the whole city of Porto. From this bird’s eye view, you can look ahead to the next stops on your itinerary. 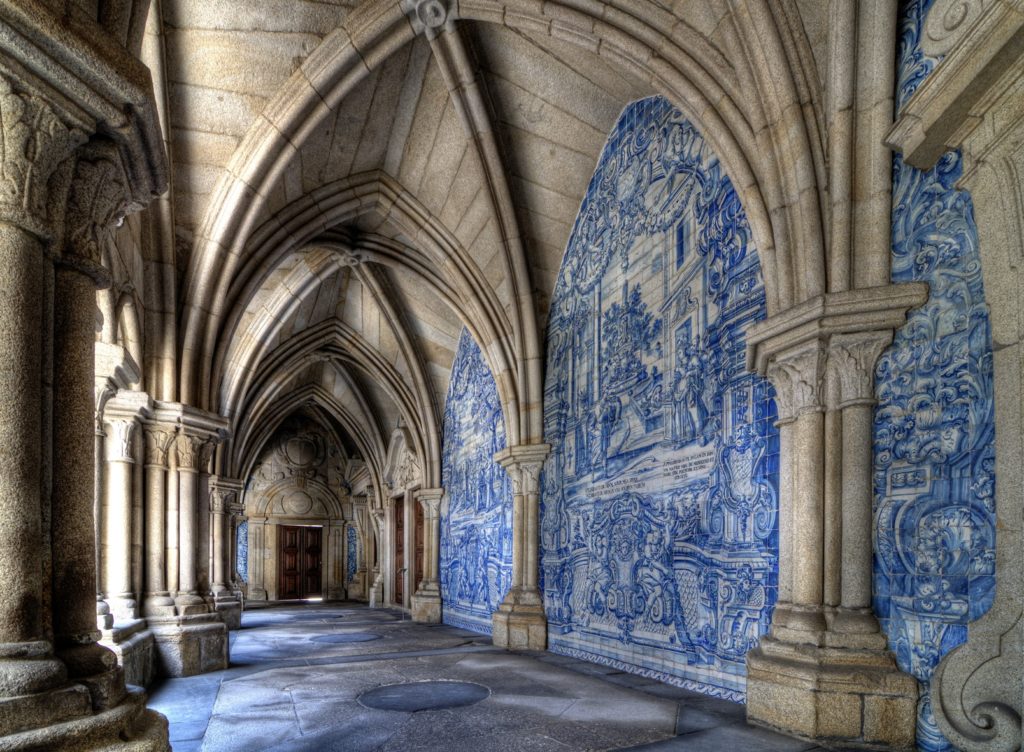 Porto’s long history is clearly on display at the city’s cathedral, which has roots going all the way back to the 5th century. The structure you see today was constructed around 1110 in the Romanesque style, with smoothly rounded arches and thick stone walls. Over the years the cathedral has seen extensive additions and renovations, so you’ll observe Gothic and Baroque elements here as well.

To get to the cathedral from Clérigos Tower, walk south along the Rua dos Caldeireiros for about 550 metres – a quick 8-minute stroll. 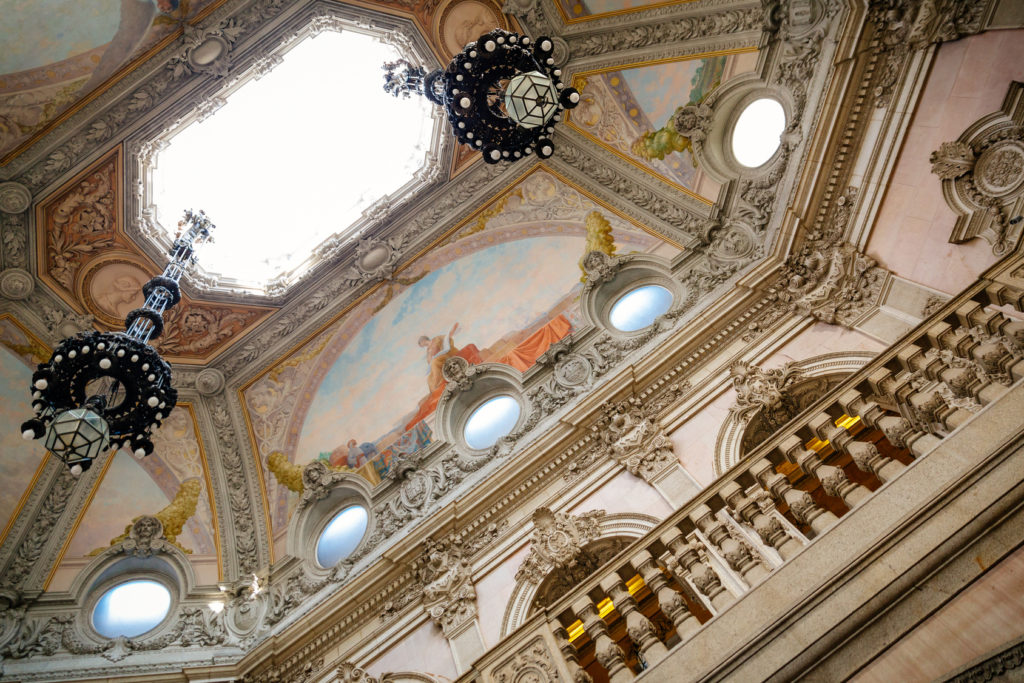 Interior of the ‘Stock Exchange Palace’.

Translated literally as ‘Stock Exchange Palace’, the Palácio da Bolsa might sound a little dull at first. But this 19th century palace, originally built for the Porto Commercial Association, is an architectural gem – not to mention a UNESCO World Heritage Site! The building is now mostly used for cultural events, but it is open to tourists and worth exploring. Some of the highlights include the Hall of Nations with its huge glass dome and colourful mosaic floor; the colossal Grand Staircase made of granite; the French Renaissance-inspired courtroom; and the truly splendid Arab Hall, done up in Moorish Revival style with mahogany and rosewood and gilded with some 18 kg of gold. The latter room is still used to receive visiting heads of state in Porto. Tours are just 45 minutes and start every half hour.

To get to the Palácio from the Cathedral, walk west along the Rua da Bainharia, turn left on Rua de Mouzinho da Silveira, then take a right on Rua da Bolsa (a 7-minute walk) 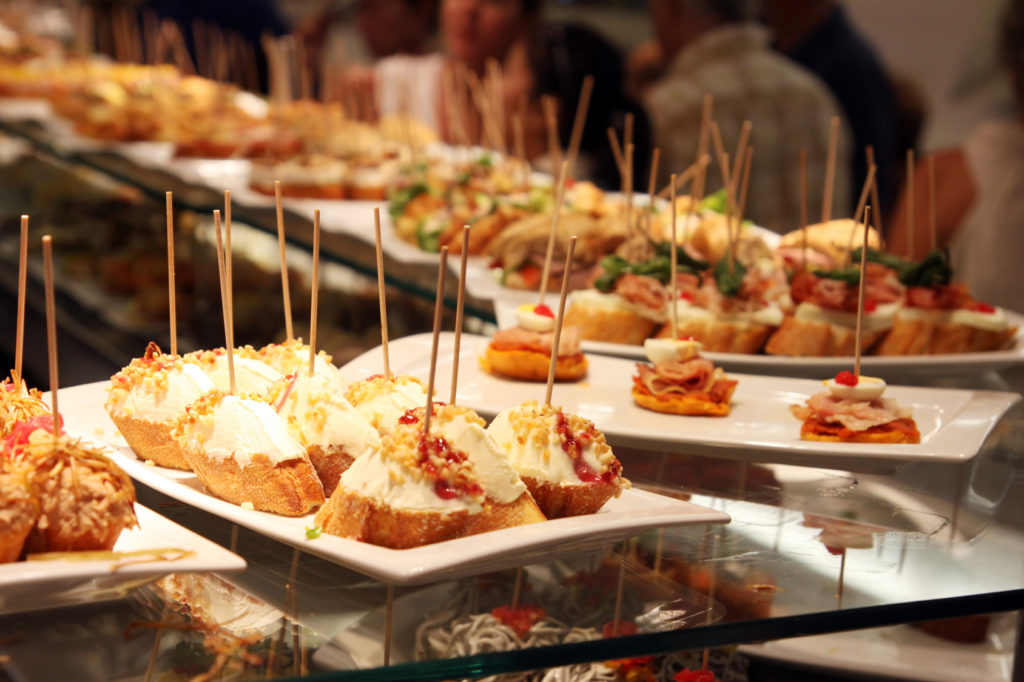 Jimão Tapas e Vinhos serves up traditional Portuguese tapas that will give you the true flavour of Porto.

Located in the historical Ribeira district (that’s ‘riverside’ in Portuguese), Praça da Ribeira has always been bustling with activity. This stone-paved square is lined with tall, narrow townhouses tiled in shades of red, turquoise, deep yellow, and blue. From the square you can enjoy excellent views across the River Douro and of the imposing Dom Luís bridge, where you’ll be later in the day!

To get to the square from the Palácio, cross the Rua do Infante D. Henrique, turn right on Rua Alfandega, and then left on Rua da Fonte Taurina (4 minutes).

Looking to grab a bite before you continue on your way? Located right on the square, Jimão Tapas e Vinhos serves up traditional Portuguese tapas that will give you the true flavour of Porto. We recommend the monkfish with olive sauce or the pork tenderloin with mushrooms! 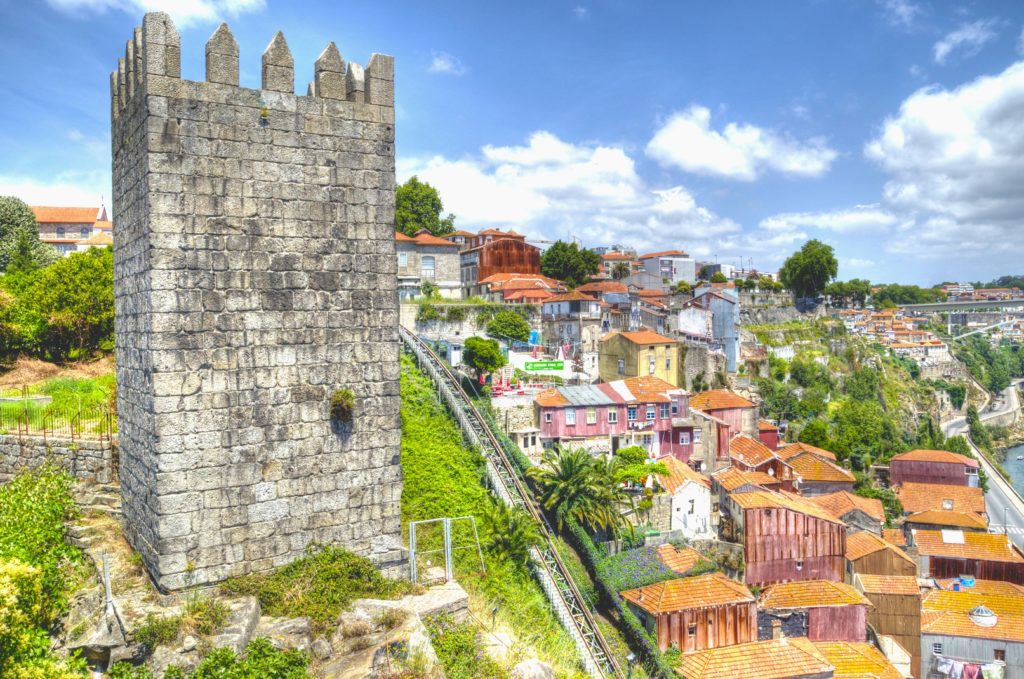 Next, take a stroll eastward along the river to see the Muralha Fernandina, the historic city walls that crown the top of the hill. Begun in the 14th century, these crenelated fortifications originally guarded a medieval hilltop town. Now, however, they are an excellent place to walk around for unparalleled city views. You may have to climb a few stairs to get here – take the scenic Escada dos Guindais, where you’ll catch many locals hanging out their washing – but it’s worth it.

The Dom Luís I Bridge is one of Porto’s most defining landmarks.

By now you surely can’t have failed to notice the imposing double-decker metal arch bridge directly adjacent to the Muralha Fernandina. The Dom Luís I Bridge is one of Porto’s defining landmarks, standing 146 feet high and spanning a full 172 metres across the Rio Douro. When the bridge opened in 1886, it was the longest iron arch bridge in the world. Though it no longer holds that record, it is no less magnificent.

Ready for dinner? Head back toward Palácio Bolsa to Ode Porto Wine House, located inside one of the city’s famous historical port houses. Here you can dine on locally produced smoked pork, sheep cheese, bread, octopus, lamb, (and of course, port!) all served on slate tables mounted on wine barrels. A rustic but upscale hidden gem!

How to Get to Porto 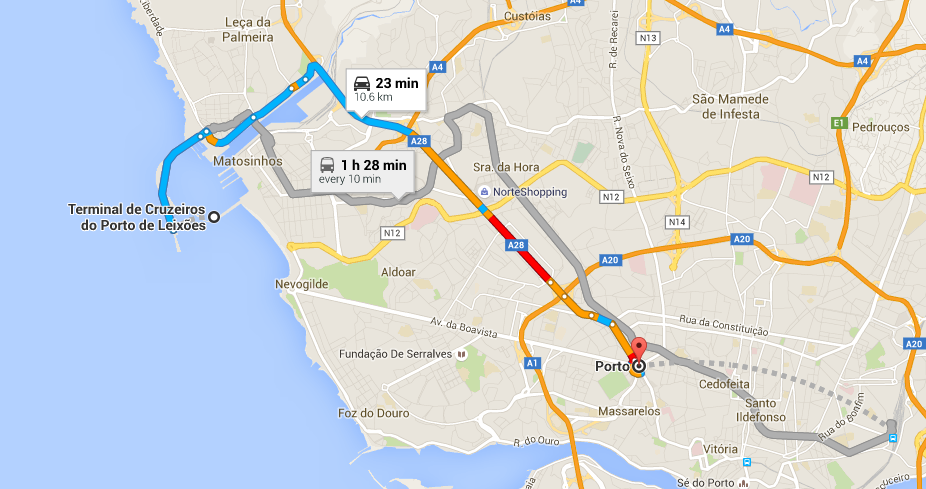 Shuttle Direct’s cruise port transfers can get you from the cruise port in Matosinhos to central Porto in around 25 minutes.

The city’s cruise port is located in Matosinhos, approximately 12 kilometres out of central Porto. With only one day to explore the city, you’ll want to start your sightseeing with as little delay as possible. Arrange your Porto cruise port transfers with Shuttle Direct, and rest assured knowing you have a quick and easy way to get into the city at the beginning of the day and back to port at the end of it.

As the top provider of transfer services in Europe and North Africa, Shuttle Direct knows a thing or two about efficient transportation and professional service. For your next holiday, cruise, business trip, or weekend getaway, arrange your transfer with Shuttle Direct, and let us show you how easy it can be.