Sicily is famous for its delicious, unique cuisine. Influenced over the centuries by settlers from across the water like Greece, Africa, the Middle East and, of course, Italy, what has emerged is an island with a cuisine all of its own.

The Sicilians are rightly proud of their culinary traditions, in which rich Middle Eastern spices mix with vibrant Mediterranean flavours, so most of the restaurants here serve local dishes, prepared with the very freshest local ingredients.

With the kind of bullish self-assurance the islanders are famous for, the locals are happy to export their produce around the world but are reluctant to import food (why would they when they considered what they raise on the island to be the best?). The result is that Sicily is pretty much the ‘home’ of local cooking. Even the island’s Michelin-starred chefs prefer to buy their produce from the excellent local food markets rather than importing from abroad.

Despite being part of Italy, you can’t really begin to understand Sicily itself until you have eaten here, drunk its wine and relaxed in the welcoming, friendly atmosphere of its many restaurants. And there’s no better place to do just that than in the luxury resort of Taormina. 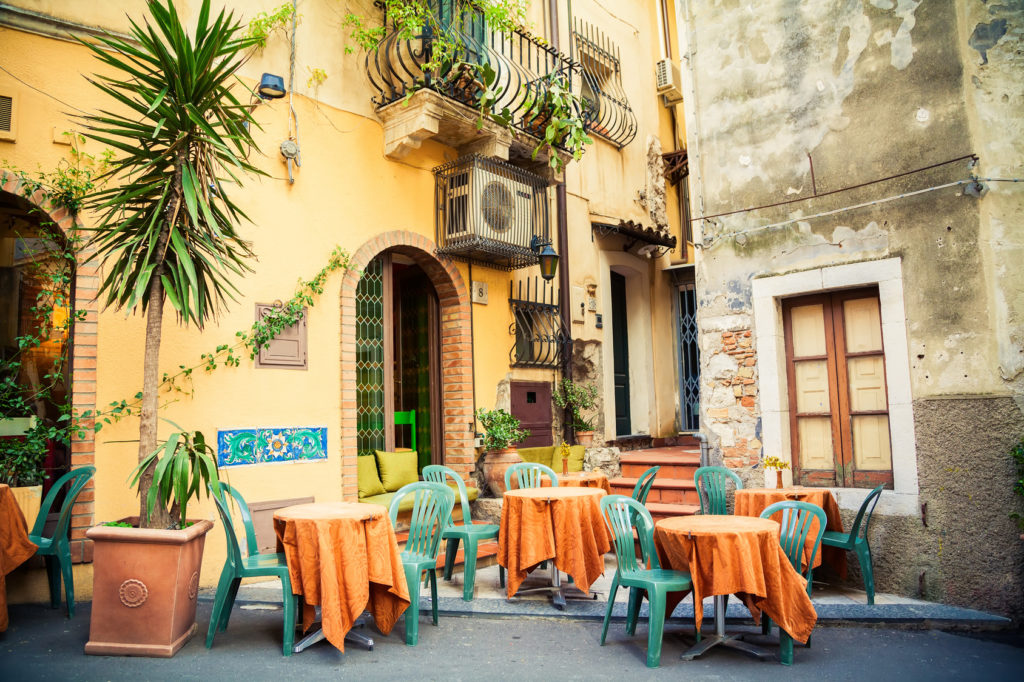 Thanks to its special location at the toe of Italy, just a short stretch of Mediterranean from Africa, Sicily has experienced a turbulent history of settlers and invaders with everyone from the Greeks, Romans, Moors and Normans settling at some point on its shores.

Of course, each group of settlers left something in the melting pot of the island’s culinary traditions. Today you can still identify which area was settled by who, just by reading the local menus: in the west couscous is a staple, while on the east coast there is a strong Greek influence. All over the island, however, you will find ice cream – which, most Sicilians will inform you, is better than you’ll find on the mainland.

There is so much delicious food to try in Sicily that it’s difficult to recommend just a few dishes, but here are some of my personal favourites.

You’ll find these delicious rice balls all over the island, but what you discover when you bite into them will change depending on which part of Sicily you visit. Different towns have different traditions: In Catania they stuff their arancini with ragu, while in neighbouring Syracuse they use mozzarella and tomato. Travel inland and you may well find your arancini stuffed with delicious chicken liver. 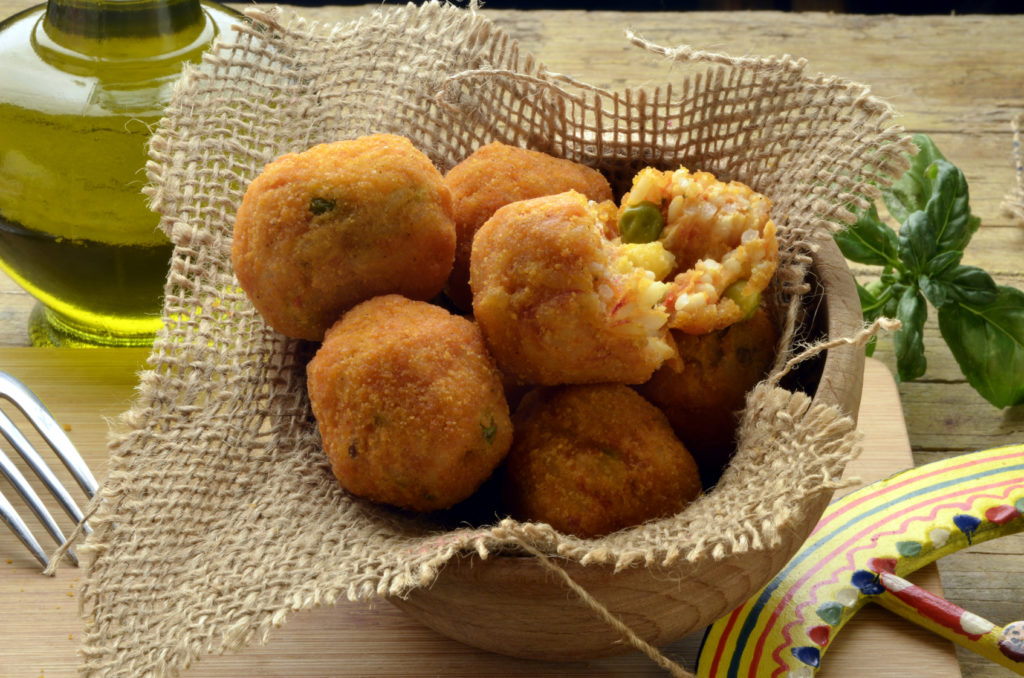 This Sicilian street food is very like the Italian pizza except that the topping is laid on a thick bread base. These are usually topped with cheese, anchovies and onions and are a delicious snack to bolster you up on a sight-seeing excursion or walk around town. 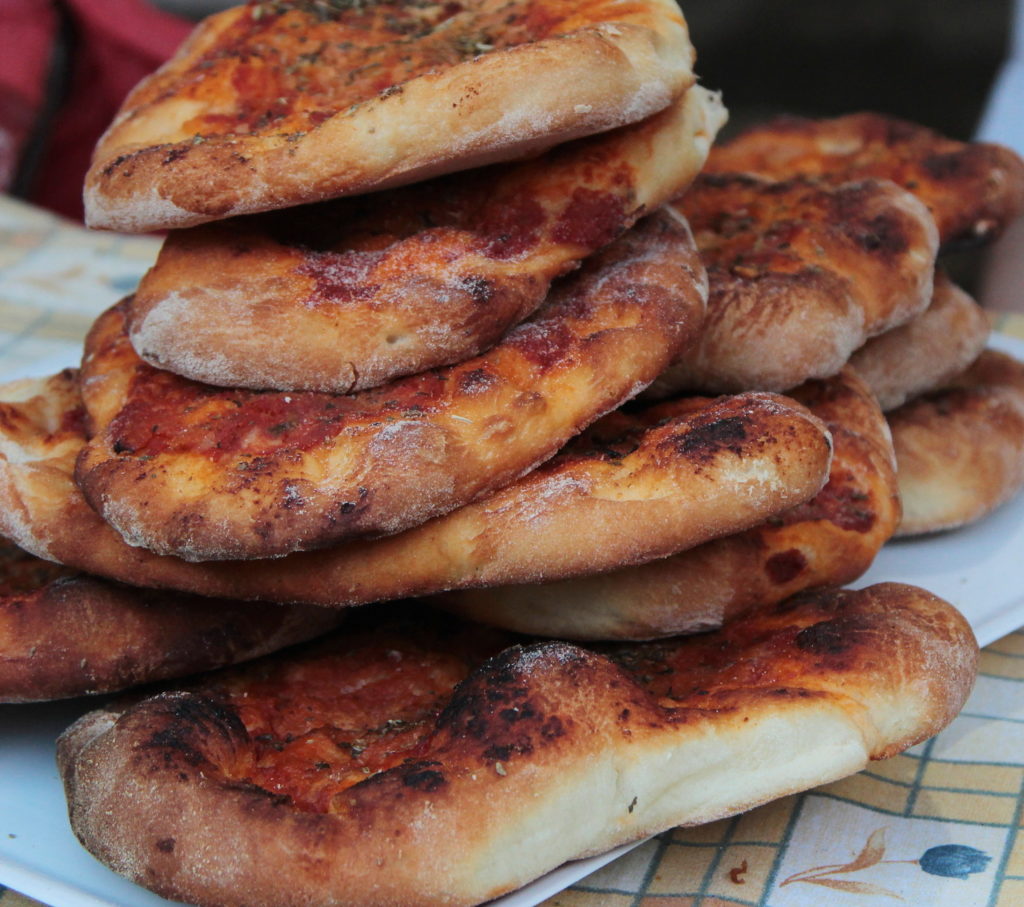 Every chef in Sicily has their own special recipe for their caponata which will make use of what grows locally. It is basically a warm aubergine salad in which the aubergine is cooked until sweet and then combined with tomato. Delicious! 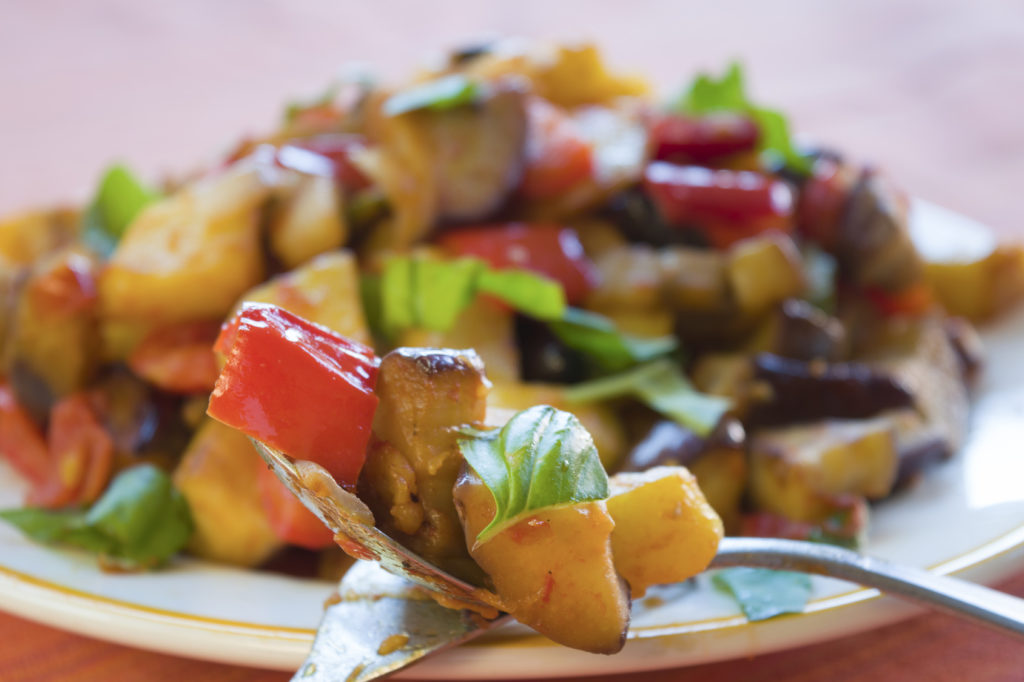 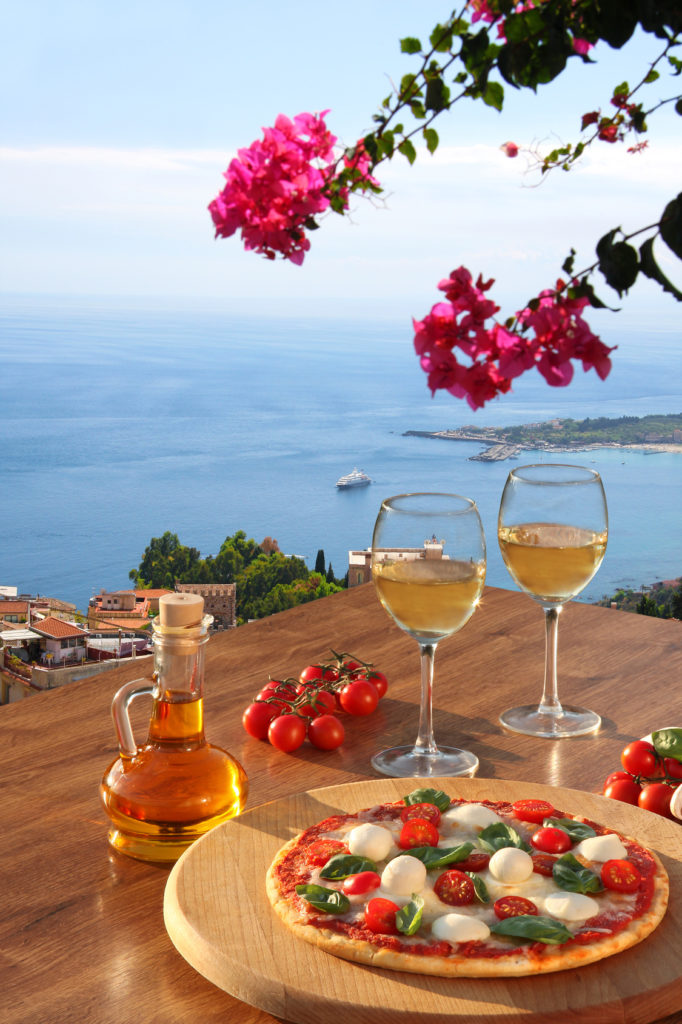 For a stunningly authentic Sicilian fine-dining experience, make sure you book a table on the terrace of the two-Michelin starred Principe Cerami at the San Domenico Palace Hotel. Not only is the setting in an old converted monastery on a hillside looking out over the Mediterranean simply divine, the elegant Sicilian food created by local Taormina chef Massimo Montaro is out of this world.

Just outside of Taormina, with equally stunning views out over the sea, is the one-Michelin starred La Capinera. The pared-back modern style of the restaurant fits perfectly with the elegant minimalism of the delicious Sicilian dishes created by its world-class chef.

Insider Tip: Consider booking a cookery class with Pietro d’Agostino at La Capinera and you’ll be able to wow your friends back home with your Michelin-star Sicilian cooking. 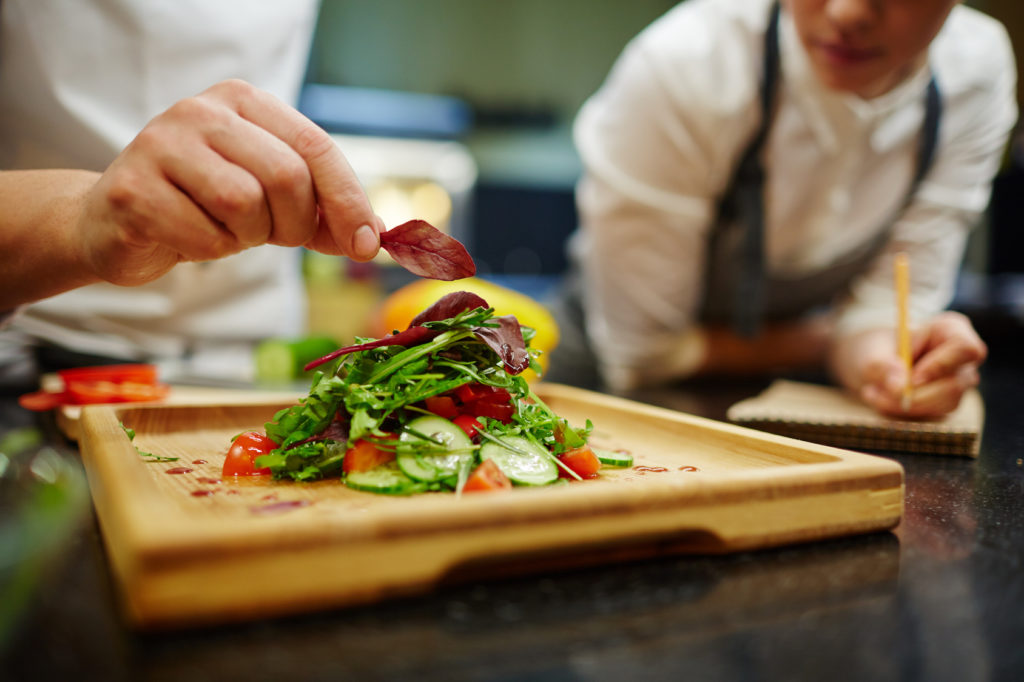 How to Get to Taormina

Flights from the UK to Catania airport take just over three hours, and the drive from the airport another hour (although you’ll pass through such beautiful Sicilian coastal landscape that you might find yourself wishing it were longer). Travel in luxury with a private car transfer from Shuttle Direct and a driver will be at the airport to meet you when you land and drive you directly to your hotel in Taormina. 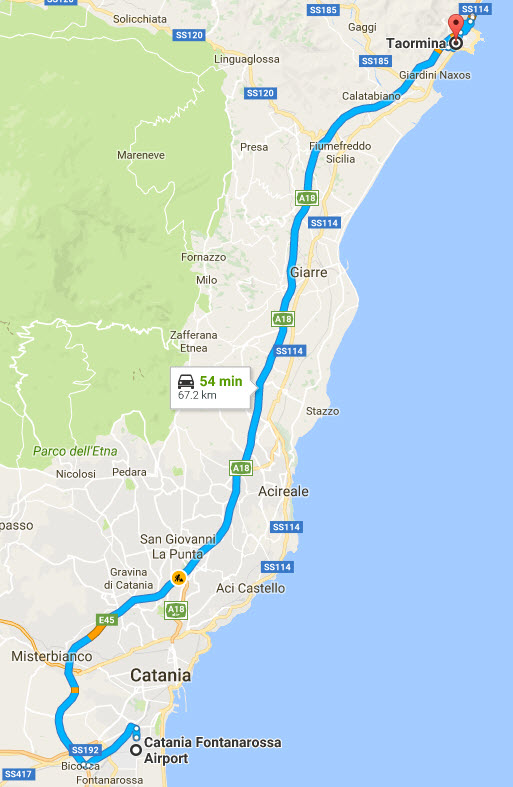 San Domenico Palace – The San Domenico Palace may have been a monastery but today it more closely resembles a palace with ornate art, marble floors and stunning gardens looking out over the sea. There are three excellent restaurants here including the two Michelin-starred Principe Cerami.

Hotel El Jebel – For an elegant blend of traditional Sicilian architecture and modern style, the five-star Hotel El Jebel in the heart of Taormina is a great choice. Guests can sample the excellent Sicilian food on the roof terrace during the summer months with its views of both the town and the sea.

Belmond Grand Hotel Timeo – Opposite the ancient Greek amphitheatre, the Belmond Grand Hotel Timeo is another beautiful palatial five-star hotel set in the hills but just a short walk down to the beach. Enjoy excellent Sicilian and Mediterranean food in the restaurant with its stunning terrace looking out over the water in one direction and towards Mount Etna in the other.

The leading provider of private and shuttle transfers in Europe and North Africa, Shuttle Direct is the most convenient way to get from the airport to your accommodation. Simply book a private executive car online before you set off and your own personal driver will be waiting to meet you when you land, so that your luxury holiday truly begins as your plane touches down.