Beginning in 2007 a foundation known as the New7Wonders Foundation carried out a global poll which asked people to vote for the ‘New7Wonders of Nature’. After four years and 100 million votes the results were published and included the Iguazú Falls which lie on the border between Brazil and Argentina. Located within the UNESCO World Heritage Site of Parque Nacional do Iguaçu, the waterfalls can be reached from the town of Foz do Iguaçu on the Brazilian side of the border or Puerto Iguazú on the Argentinian side. Visitors should ensure that they leave enough time during their visit to see the falls from both sides of the border as they are quite distinct and are must-see sights in this part of the world. 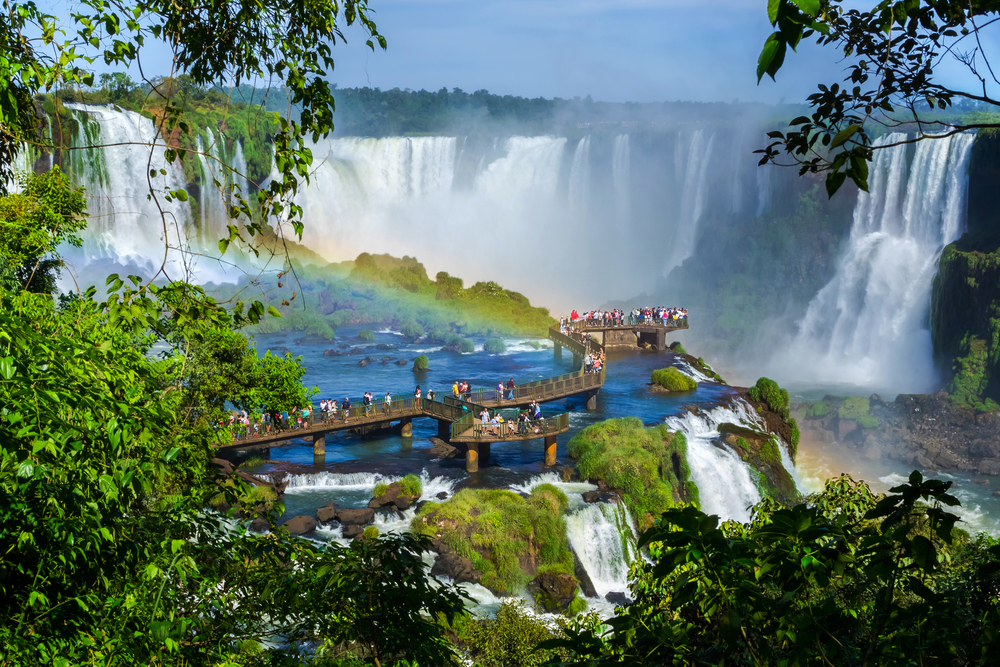 Getting to Foz do Iguaçu

International travellers can fly to Foz do Iguaçu Airport on connecting flights from Sao Paolo. The airport lies 18km south-east of Foz do Iguaçu and 15km east of the Argentinian town of Puerto Iguazú. Border crossings between the two countries are generally fast and trouble-free. There is an airport bus (#120) which goes to the town of Foz do Iguaçu in one direction and the Iguazú Falls in the other. Taxis are plentiful, otherwise you can book a private transfer from Foz do Iguaçu Airport into the town, to the falls or across the border into Argentina. Travellers in Argentina would be advised to take a domestic flight from Buenos Aires to Cataratas del Iguazú International Airport which lies 20km south-east of Puerto Iguazú. 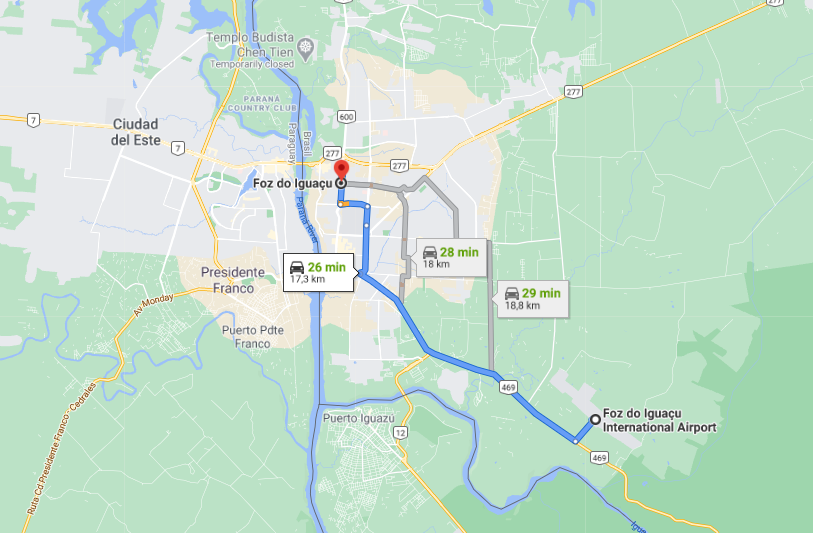 From Foz do Iguaçu: The local 120 bus route runs from the Terminal de Transporte Urbano (TTU) in Foz do Iguaçu to the airport then continues to the waterfalls with a stop at the Tropical Bird Park. There are also international buses to Puerto Iguazú which depart from a bus stop just outside the TTU. A popular way to explore the area is on the Foz do Iguaçu City Bus Tour which visits many local attractions including an Islamic Mosque, a Buddhist Temple and the Three Borders Landmark on a three hour itinerary.

From Puerto Iguazú: Puerto Iguazú on the Argentinian side of the border is smaller than Foz do Iguaçu and well located for visiting the waterfalls on both sides. There are buses to the falls on both sides of the border but crossing into Brazil by bus can prove to be time consuming. For this reason you’d be best advised to arrange a taxi who will drop you off at the Cataratas do Iguaçu Visitors’ Centre and collect you at a pre-arranged time. Within the town itself you can walk to the Three Frontiers landmark from where you can stand within a stone’s throw of Paraguay and Brazil.

Tourist Attractions in Foz do Iguaçu

Iguazú Falls: Known as the ‘Cataratas do Iguaçu’ in Brazil and the ‘Cataratas del Iguazú’ in Argentina, this UNESCO World Heritage Site is made up of around 257 individual waterfalls making it the world’s largest waterfall system. The largest of these falls is Garganta do Diabo (Devil’s Throat) which is on the Argentinian side of the border and stands 90 metres high. Iguazú is quite spectacular and yet relatively unknown on the world stage.

Visitors can walk along well marked tracks to see the waterfalls from many angles or can take an exhilarating boat tour which approaches the gushing water from below. Approximately two-thirds of the waterfalls lie on the Argentine side but visitors should ensure that they allow two full days so as to experience Iguazú from both sides of the border. 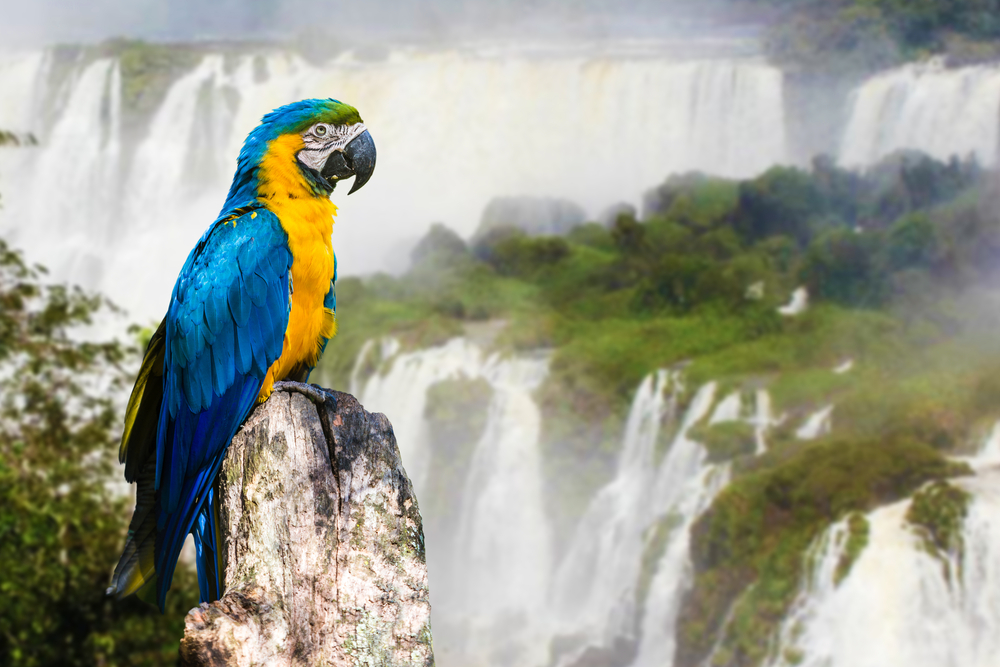 Bird Park: The Parque das Aves on the approach road to the Iguazú Falls Visitor Centre on the Brazilian side of the border is well worth a visit. The park is home to hundreds of tropical birds which live in huge aviaries surrounded by native woodland. My favourite resident was the beautifully coloured Toco Toucan which I’d only ever seen previously on an advertisement for Guinness!

Itaipu Dam: Located on the Paraná River, some 15km north of Foz do Iguaçu is the Itaipu Dam which is the world’s 2nd largest producer of hydroelectric power after the Three Gorges Dam in China. The dam can only be visited on pre-arranged tours which are available from online operators and from travel agencies in Foz do Iguaçu and Puerto Iguazú. 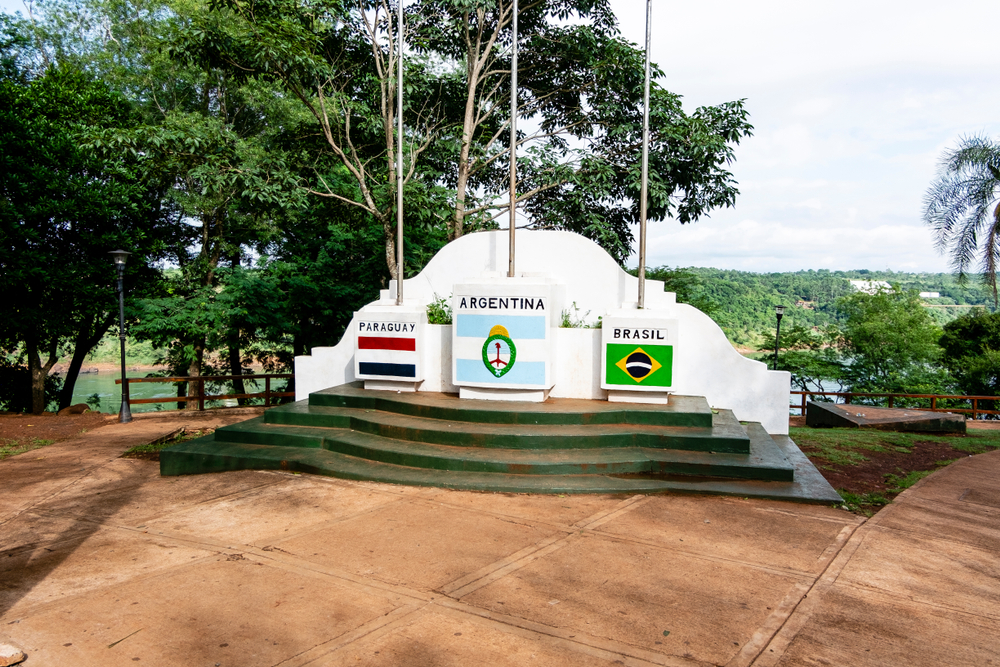 Triple Frontier: Whether you’re in Brazil, Argentina or Paraguay, you have to get a photo at the ‘Tríplice Fronteira’ which is where these three countries meet. There is a marker near the river bank in each of the three countries from where you can see the markers of the other countries.