When you enter your golden years, something amazing happens. The nine-to-five routine grinds to a halt; your offspring have (finally) attained self-sufficiency; you suddenly have all this time – but what to do with it?

For many recent retirees, the answer is simple: travel. Now’s the time to book that cruise you’ve been dreaming of, and visit all those places on your ever-growing bucket list. If you’re looking to get a bit further afield than simply across the channel, consider Istanbul. Situated at the intersection of two continents, this ancient city pulses with history, culture, and activity.

In our opinion, seeing this city by sea on a cruise is an experience like no other. When your ship pulls into the dock in Istanbul, don’t waste a single second – use our comprehensive itinerary to make the most of your day! 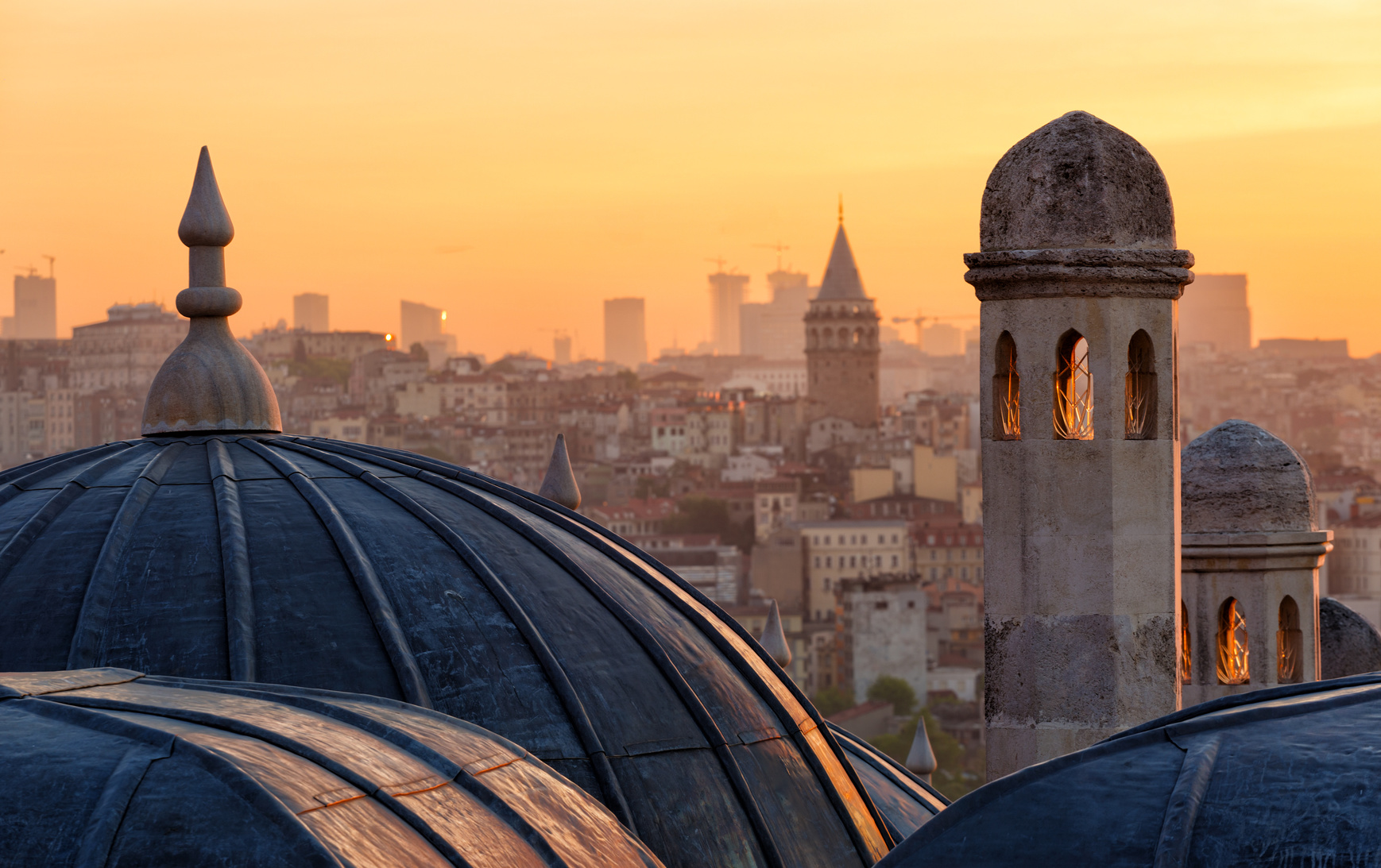 Get your bearings for the day by ascending to the top of Galata Tower. This cylindrical cone-topped medieval tower dominates the skyline in the north of the city, and offers a spectacular 360-degree panoramic view of Istanbul’s historic peninsula. When it was built in 1348, Galata Tower was Istanbul’s tallest building at 219.5 feet. Today, two elevators carry visitors to the top, so you’ll only have to climb a handful of stairs! 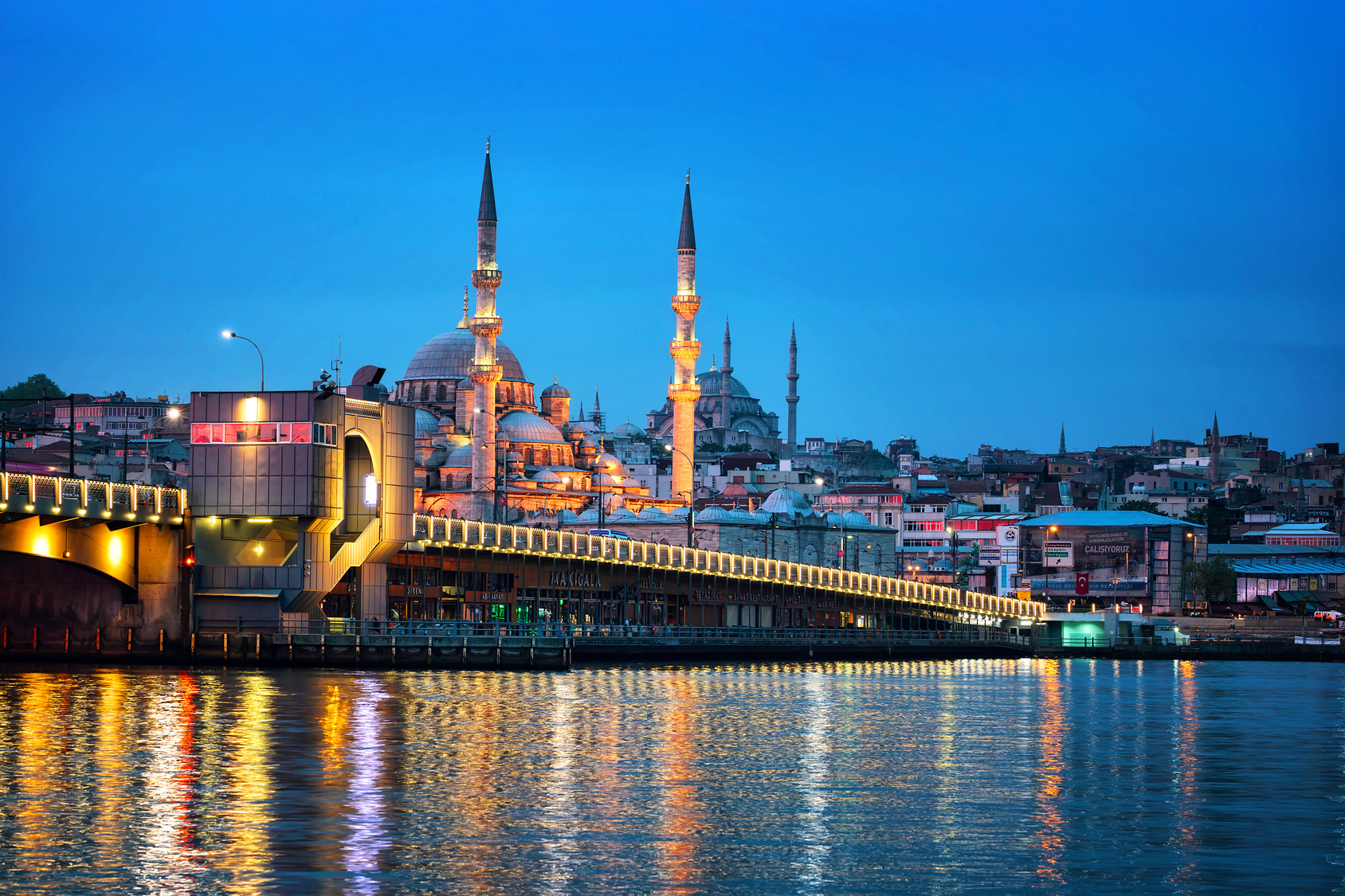 Now it’s time to cross the Golden Horn, the long and narrow estuary that separates the historic centre of Istanbul from the newer part of the city (if you can call Galata Tower’s 700 years of history ‘new’). The Galata Bridge has spanned this stretch of water since the 6th century, though it has been replaced many times. Symbolically, the bridge is a link between the traditional cultural centre of old Istanbul (ancient Byzantion and Constantinople) and the newer districts of Galata, Beyoğlu, Şişli and Harbiye. Since the late 19th century, the bridge has featured prominently in Turkish literature, art, and poetry. 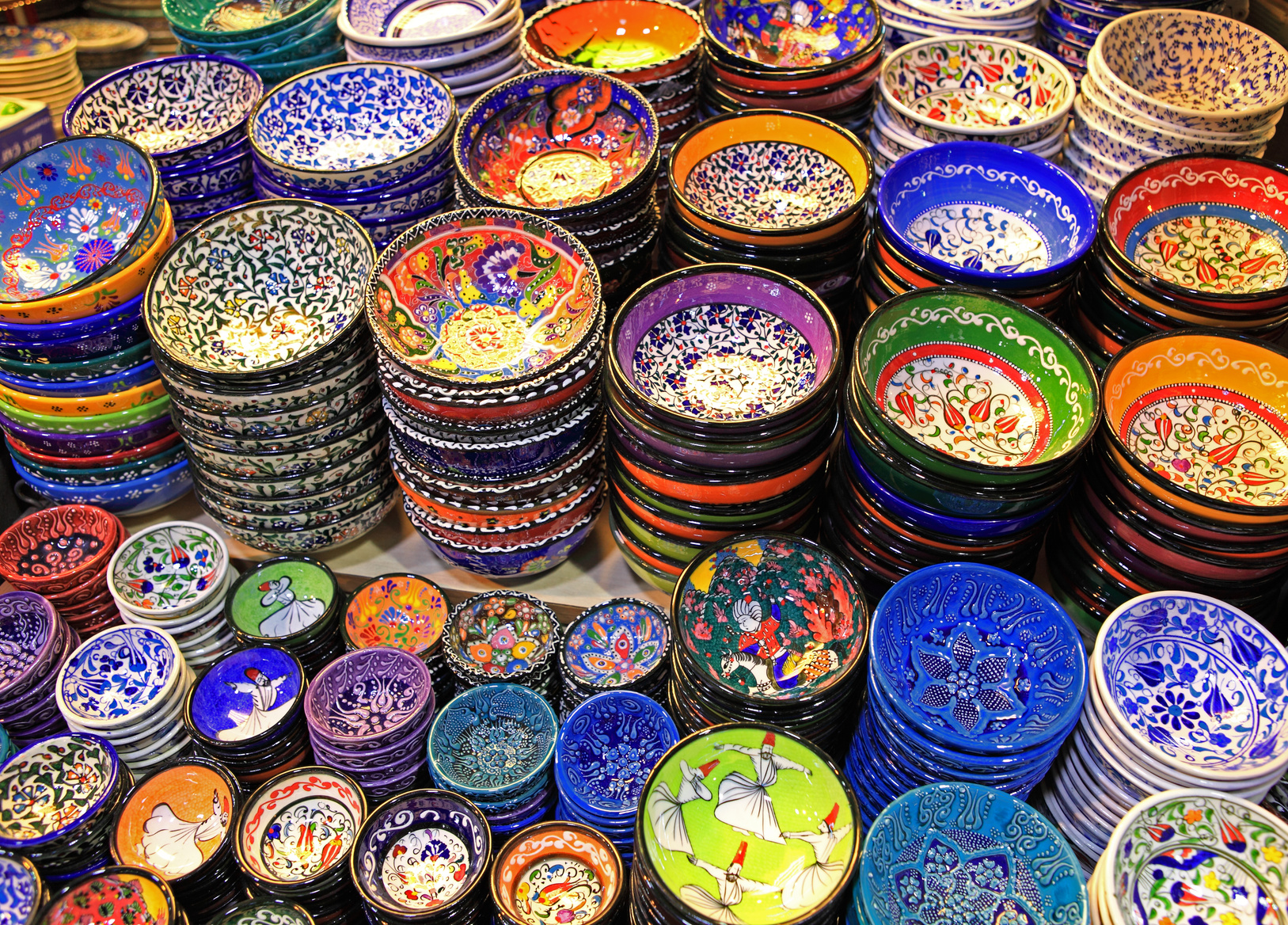 A twenty-minute walk southward from the bridge, you’ll come to the Grand Bazaar. “Grand” doesn’t even begin to describe this sprawling marketplace. One of the largest and oldest covered markets in the world, the Grand Bazaar comprises some 61 streets and 6,000 shops beneath its complex network of red-roofed corridors. Attracting some 91 million visitors each year, the Grand Bazaar is an exercise in superlatives. You could probably spend all day here, but remember there’s so much more of Istanbul to see!

As you walk through this colourful and bustling labyrinth, you’ll see just about anything you can think of for sale. From carpets to coffee, spices to scarves, tea sets to trinkets, there’s a lot to sort through. Be sure to explore thoroughly and compare items before you buy them – sometimes it can be difficult to tell apart the treasures from the tourist junk. Don’t miss the food stalls – this is the perfect place to enjoy a thoroughly Turkish lunch. We recommend the adana kebab from Kara Mehmet Kebap Salonu (İç Cebeci Han 92, +90 212 513 5520. Open 11am-5pm, closed Sunday). 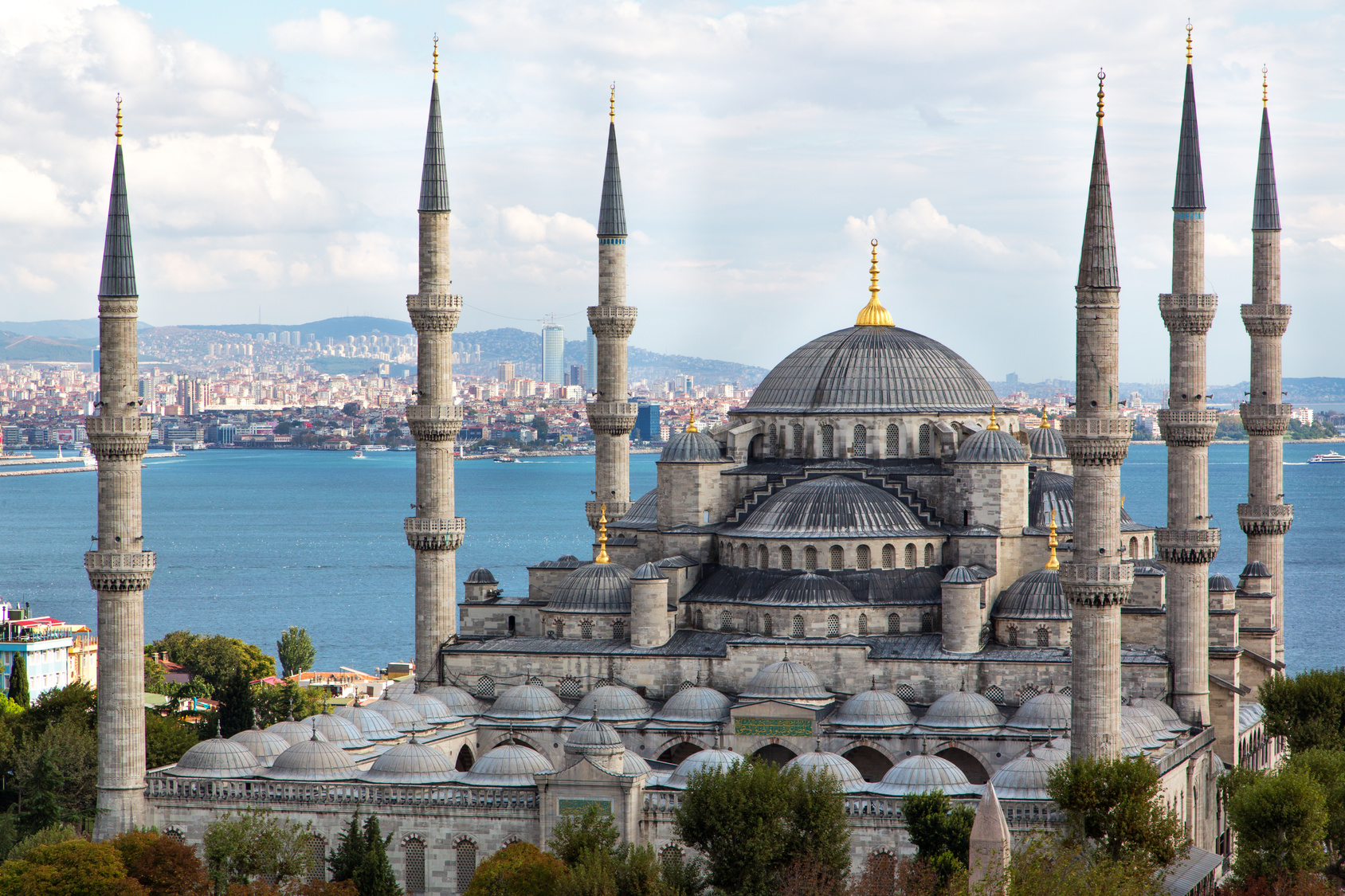 Now it’s time for Istanbul’s most famous landmark, the basilica-turned-mosque-turned-museum known as Hagia Sophia. A fifteen-minute walk from the Bazaar, you’ll see Hagia Sophia looming over you long before you arrive.

There are hardly words to describe this nearly 1,500-year-old structure other than simply – staggering. Famous for its massive dome and classic Byzantine style, the Hagia Sophia was the largest cathedral for almost a thousand years before the completion of Seville Cathedral in 1520. Even so, the Hagia Sophia is a magnificent sight, and has held formidable architectural influence over the architecture of the Eastern Orthodox, Roman Catholic, and Muslim worlds.

Originally established as a Greek Orthodox Christian patriarchal basilica on the orders of Emperor Justinian I, Hagia Sophia became a mosque after the Ottoman Turks conquered Constantinople in 1453. The building remained a mosque until 1931, at which point it became the museum you see today.

If you think the Hagia Sophia is a splendid sight from the exterior, just wait until you get inside. The interior of this famous building is decorated with brilliant gold mosaics, marble pillars, gilt Arabic letters, and intricate arches and half-domes… 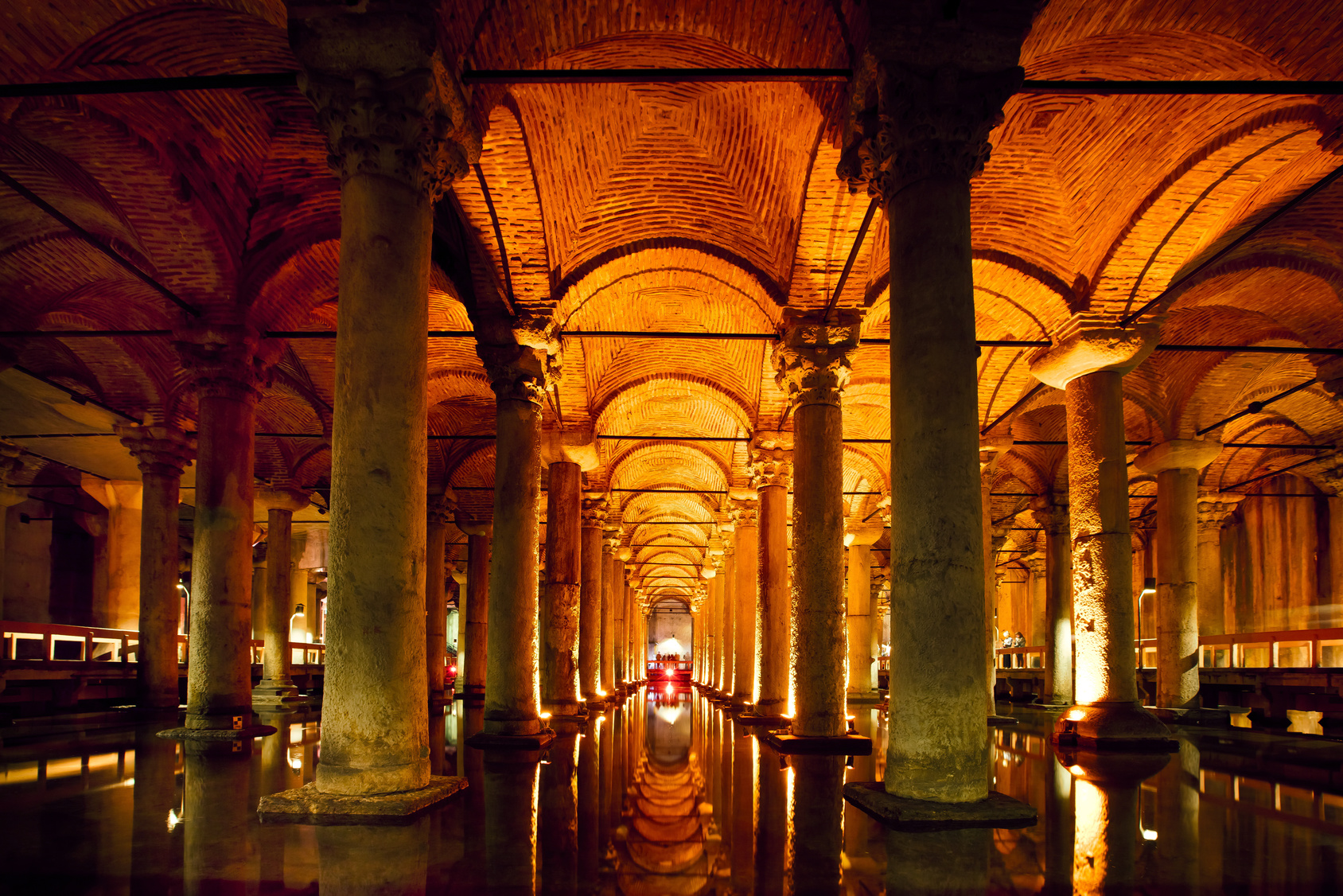 Around the corner from the Hagia Sophia, you’ll come to the Basilica Cistern. Don’t be fooled by the name – this isn’t your average basilica. Named after the square that originally existed above it, this underground cistern is a subterranean watery wonderland.

Commissioned by Emperor Justinian I in 532, the cistern provided water to the Great Palace of Constantinople and other buildings in the area – think of it like an enormous and elaborate well. Capable of holding up to 80,000 cubic metres of water, the Basilica Cistern is now mostly empty.

Today the cistern is one of Istanbul’s most popular tourist attractions – and for good reason. More than simply a reservoir, the Baslica Cistern is a cathedral-sized underground chamber supported by 336 9-metre marble columns of the Ionic, Corinthian, and Doric orders. At the base of each column, a bright lamp casts eerie shadows and reflections in the water below – truly a sight you won’t want to miss. 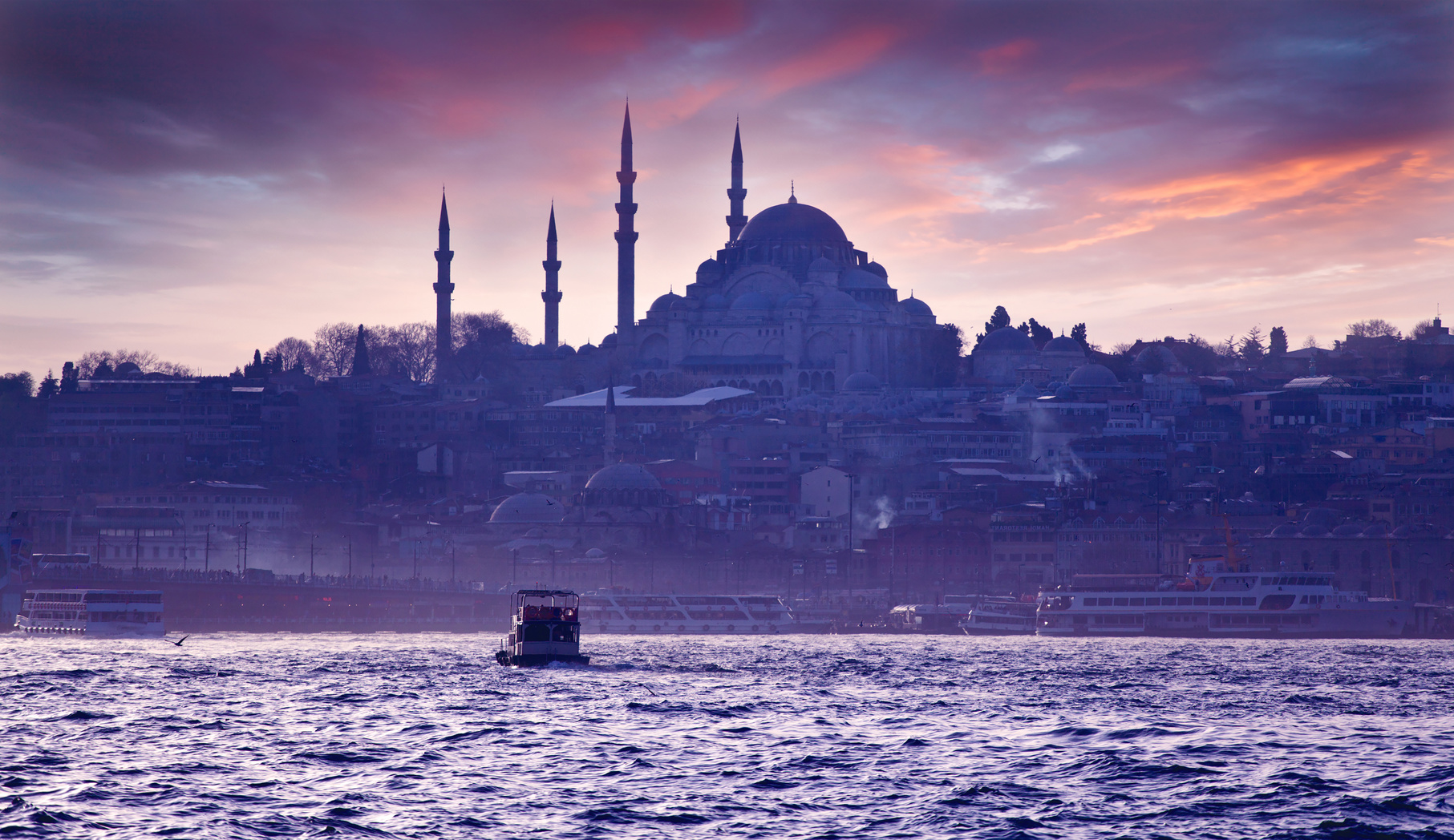 Istanbul is home to over 3,000 mosques. That can make it difficult to decide which to visit, but if you can only choose one, it should be Sultanahmet, commonly known as the Blue Mosque. Built in the 7th century, the Blue Mosque is distinguished by its six slender minarets – most mosques have only two or four. The mosque gets its nickname from the blue tile work that adorn its interior.

With its massive piers, thirteen imposing domes, and over 200 stained glass windows, the Blue Mosque is a splendid site. Keep in mind, though, that it is still a functioning mosque – not a museum like the Hagia Sophia – so it will be closed to tourists for prayer five times a day. Only worshippers are permitted to enter through the main door, so you will need to enter the mosque through the south door. Tourists will be asked to remove their shoes and women will be asked to cover their hair (head scarves are provided).

By now you’re probably ready to rest your feet and get some sustenance. A five-minute walk from the Mosque you’ll find Harab’be, a cosy café with a relaxed atmosphere. This restaurant will make you feel right at home with its welcoming staff, wide selection of herbal teas, comfy couches, live music, beautiful Turkish lamps, and of course, fantastic fresh local cuisine. 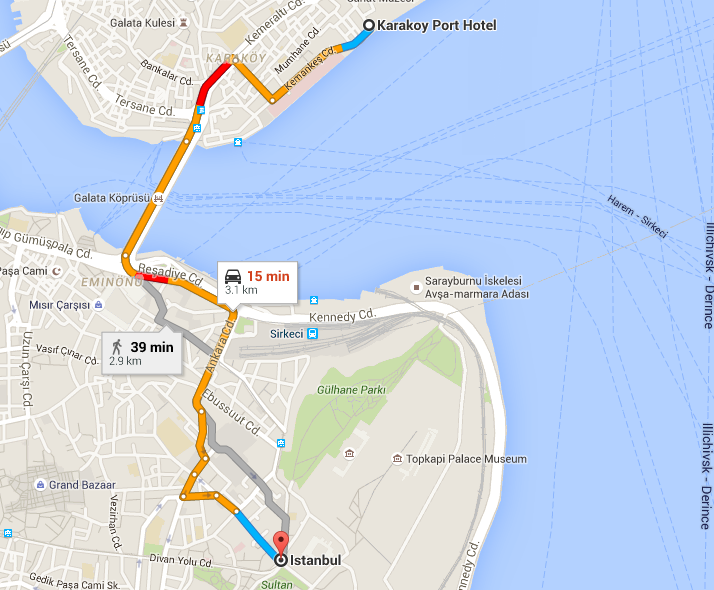 Istanbul’s cruise port is located in Karakoy, north of the Golden Horn. Get off to a running start in this lively city by booking your Istanbul cruise port transfers with Shuttle Direct. Book a private or shared vehicle to take you straight from the dock to the first stop on your itinerary, and back again at the end of a long day.

Shuttle Direct is the number one provider of transfer services throughout Europe and North Africa. Offering transport to and from airports, cruise ports, hotels, or other points of your itinerary, Shuttle Direct gets you where you need to go with comfort, efficiency, and professionalism.