When you reach your golden years, it’s time to finally dedicate some attention to that travel bucket list you probably made long ago. Treat yourself and your partner to a cruise on the Mediterranean – a great way to savour retired life while also ticking off a few famous European capitals along the way.

For lovers of art, culture and history (not to mention romance!), Rome often tops the list – and for good reason. This ancient city’s port is a popular stop for Mediterranean cruise ships. However, many onshore stopovers usually last only one day. In a city like Rome, where one can spend a lifetime and still not see everything, it’s important to make every minute count.

Plan out your time onshore so that you’re ready to make the most of your stopover before the ship has even docked.

The Colosseum – Start your day at perhaps the most iconic of Rome’s attractions: the Colosseum. One of the most recognisable remains of the Ancient Romans, this concrete and sand structure looms 150 feet high over a busy multi-lane road in the centre of the city. Built between 70 and 80 AD under emperors Vespasian and Titus, the Colosseum is still the largest amphitheatre ever built. Capable of seating 50,000 to 80,000 spectators, the Flavian Amphitheatre (as it was originally known) hosted gladiatorial games, mock sea battles, executions, animal hunts, and dramas. 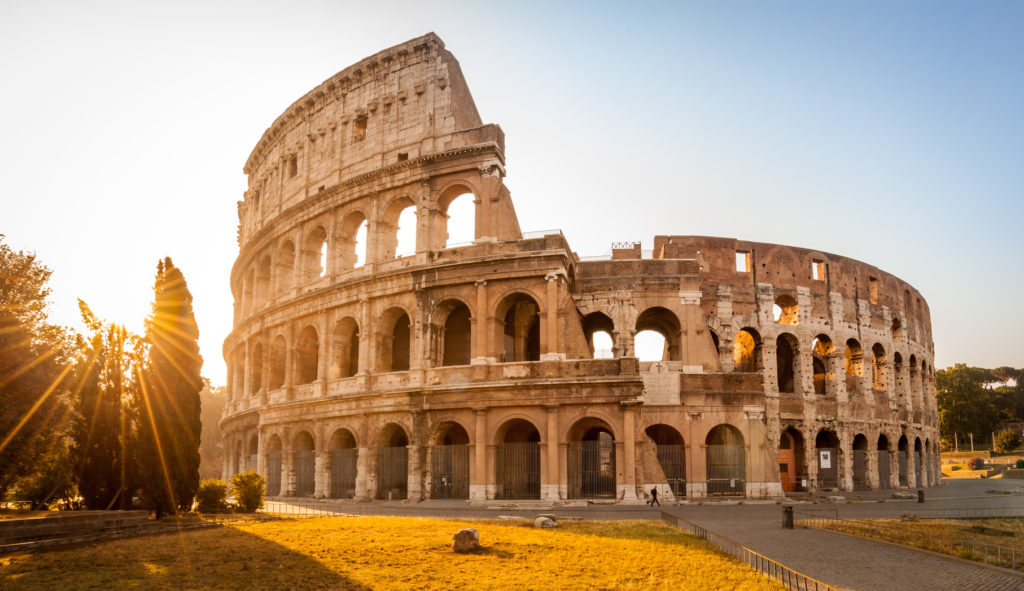 The Colosseum is one of the most recognisable remains of the Ancient Roman Empire.

With its graceful arches and rows of Doric and Corinthian columns, the Colosseum is a classic example of Roman architectural traditions. On the off chance you forget what it looks like, you’ll find it etched on the Italian 5-cent euro coin!

Roman Forum – Now that you’re primed on Ancient Rome, amble down the Via dei Fori Imperiali to the Roman Forum – a large rectangular plaza that was once the beating heart of Ancient Rome. Here you’ll find the ruins of a plethora of buildings and monuments: the Curia, where Roman senators gathered; the triumphal Arch of Septimius Severus; the Temple of Vesta; and the public speaking podium, the Rostrum. And that’s just the tip of the iceberg.

During the height of the Roman Empire, the Forum was the centre of public life – the site of speeches, trials, processions, ceremonies, and commercial affairs. As you amble down the main thoroughfare, the Via Sacra (as 4.5 million visitors do each year), imagine the Forum as the bustling, buzzing hub it once was.

The Pantheon – Next, make your way over to the Piazza della Rotonda – the easy 15-minute walk will give you the chance to see even more of this enchanting city. Here you’ll find the Pantheon, a 2,000-year-old former temple completed in 125 AD. Built by the Roman Emperor Hadrian, the Pantheon was intended to be a temple dedicated to all the classical gods – hence the name, derived from the Greek pan (all) and theos (god).

The Pantheon was intended by the Roman Emperor Hadrian to be a temple dedicated to all the classical gods.

As you enter this massive structure, gaze up at the cavernous coffered dome – the largest unreinforced concrete dome ever built. In the centre of the dome, the 8.7-metre oculus serves as a portal to the heavens, connecting man with the gods.

By now you’ve probably thoroughly earned a bite to eat. Just across the piazza from the Pantheon you’ll find Ritorno Al Passato, an Italian eatery with plenty of outdoor seating. Enjoy pizza, pasta, or a salad with a glass of wine while you soak up the view of the Pantheon’s façade and watch the people bustling around the piazza.

Castel Sant’Angelo – Once the tallest building in Rome, this cylindrical building was originally built as a mausoleum for the Roman emperor Hadrian and his family in the second century AD. In later centuries, the castle became a papal fortress, most famously for Pope Clemente VI in 1527, who fled from the Vatican to the castle via a secret underground passageway during the sack of Rome. Today, the castle houses a museum containing a varied collection of paintings, sculptures, and military artefacts.

Prices: €7 (may increase during temporary exhibitions)

Sistine Chapel – No visit to Rome would be complete without a visit to this iconic chapel, most famous for its frescoes by Michelangelo on the interior and ceiling. Part of the Apostolic Palace (the official residence of the Pope), the chapel has significant religious and ceremonial significance – it is here that the Papal conclave meets to elect a new Pope.

No visit to Rome would be complete without a visit to the iconic Sistine Chapel.

Most people visit the Sistine chapel, however, to marvel at the frescoes. On the ceiling, an 800-square-metre scene unfolds, depicting nine stories from the Book of Genesis – including the famous outstretched hand of God in The Creation of Adam. On the altar wall, you’ll see another Michelangelo masterpiece, The Last Judgment. This enormous work, which the artist began 25 years after finishing the ceiling, depicts the second coming of Christ and his final and eternal judgment of all humanity. Though it may be tempting to capture the moment forever, remember that no photography is permitted in the chapel at any time.

Now that you’ve soaked up Rome’s most famous sights, you’re probably exhausted and ready for a good dinner. Head on over to La Vittoria, just a stone’s throw from St. Peter’s Square. This cosy, authentic spot has been serving up exemplary Italian cuisine since 1919. Start with the delicate and crispy fried courgette blossoms, a classic Italian appetiser. From there, try one Vittoria’s fresh egg pasta dishes such as the fettuccine with salmon and mushrooms. If you’re really famished from your day in Rome, you may even have some room for a slice of cocoa-dusted tiramisu. 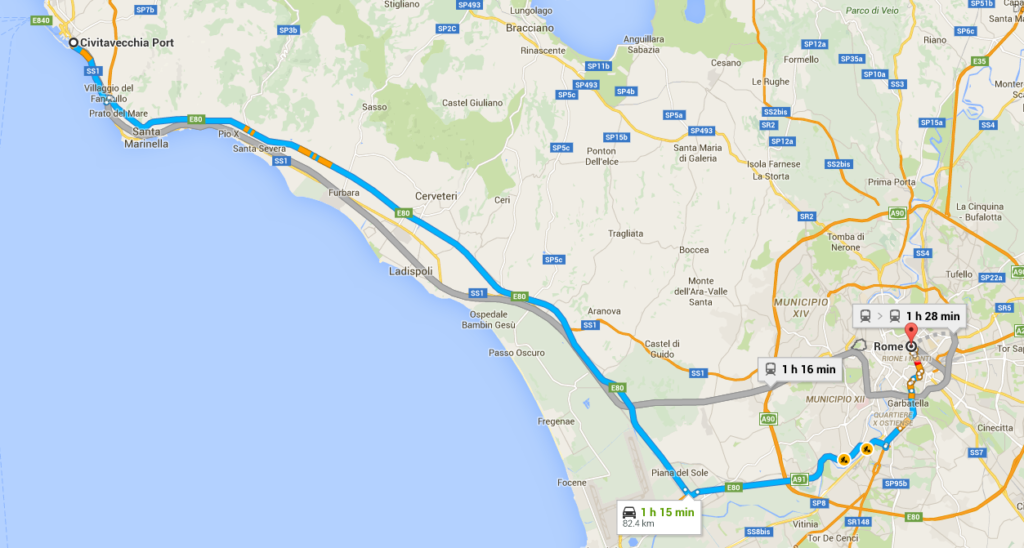 A quick glimpse at a map of Italy shows you that Rome is not a coastal city. Though the Tiber River connects the city to the Tyrrhenian Sea, cruise ships cannot go up the river to dock in Rome. Instead, the major Rome cruise port is in Civitavecchia – about 50 miles north of Rome on the coast. To get from Rome cruise port into Rome proper, book a private or shared transfer to make the one-hour drive. When you only have one day to spend in Rome, you’ll want to get there as quickly and conveniently as possible with an experienced driver who knows the area. With our easy online booking system, you and your partner can be marvelling at the sights of Rome soon after stepping ashore.

For the most convenient, easy to book airport transfers throughout Europe and North Africa, Shuttle Direct’s fast and friendly service offers peace of mind and exceptional service. Book a shared or private transfer online before you leave home and our experienced drivers will meet you at the airport and transport you to and from your holiday accommodation without delay. Choose Shuttle Direct for the best airport transfers in the business.