To the majority of package tourists from Northern Europe, the city of Malaga is little more than a gateway to the holiday resorts of the Costa del Sol. Little do they know how much they are missing! With a history dating back to its founding by the Phoenicians in the 8th century BC it is one of the world’s oldest cities. Today’s visitors can admire its historic attractions which include a fine Roman Theatre, a well-preserved Moorish Fortress and an immense Cathedral. There’s also a vibrancy about the city thanks to the number of tapas bars, cafés and restaurants in its historic centre which always seem packed with local people.

Cruise ship passengers visiting Malaga have the opportunity to either discover this fascinating city or head off on a day trip to nearby Granada where the Alhambra Palace awaits.

The Port of Malaga enjoys a long established relationship with the cruise ship industry, welcoming more than 700,000 passengers every year. The volume of cruise ships passing through has led to major infrastructural developments within the port area which has numerous docking options depending on the size of vessels.

The largest cruise ships generally dock at the Eastern Wharf which is more than 2km from the city centre. Shuttle buses to Plaza de la Marina are often provided for passengers and taxis are available. There’s a tourist information office in the modern terminal building should you want to pick up a city map before leaving the port area.

Smaller ships can dock at Wharfs 1 (Ricardo Gross) and Wharf 2 (Guadiaro) which are near enough to the city centre that passengers can walk there. In this case you can get a city map at the tourist office in Plaza de la Marina (Plaza de la Marina 11). 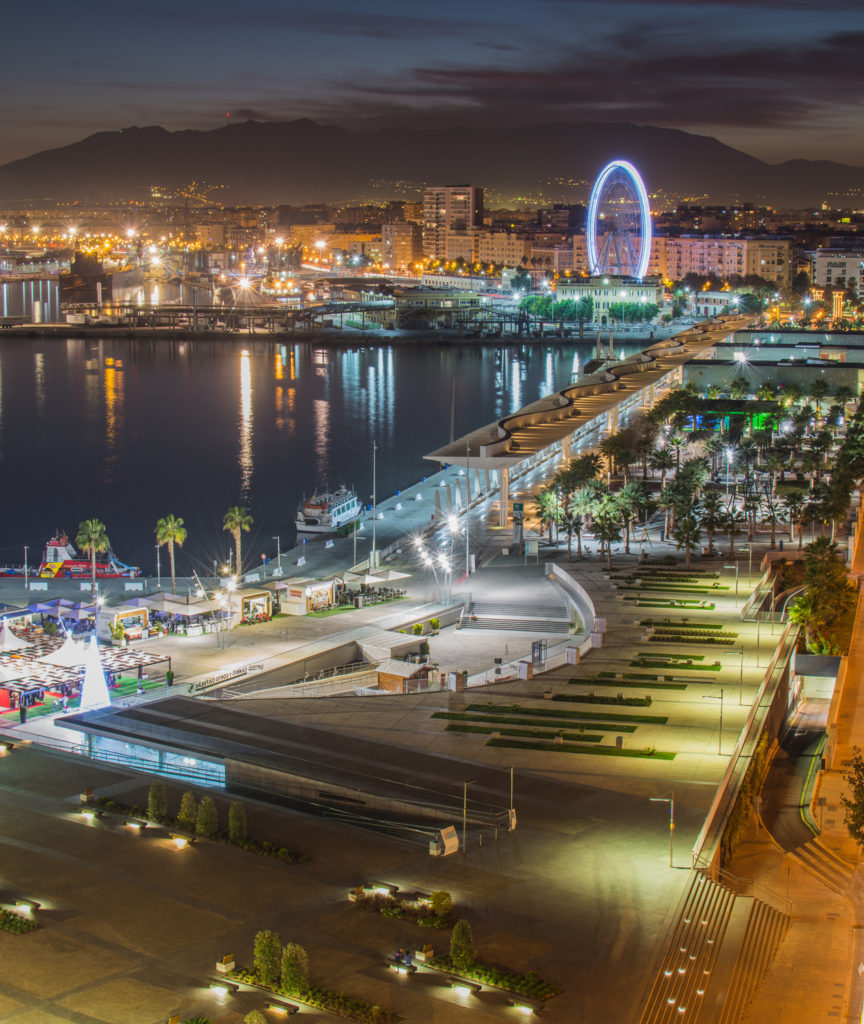 Malaga Airport lies just 12km south-west of the cruise port in Málaga. In normal traffic conditions transfers between these them should take about 25 minutes by road. If your cruise begins or ends in Málaga you’ll have no problem getting to or from the airport thanks to a selection of transport options.

There’s a bus which leaves from outside the arrivals terminal called ‘Linea A Express’ which goes to the Alameda Principal near the port. You can also travel into the city by train from the airport station opposite the Terminal 3 arrivals building. Trains go to ‘Malaga Centro Alameda’ which is also just a short walk from the port area.

Insider Tip: If you’re arriving in Málaga for a cruise you should enquire as to whether you can arrange for a ‘combined check-in’ which allows some passengers to have their luggage checked all the way through from their departure airport to the Port of Malaga so you don’t need to collect it at the Málaga Airport.

For the sake of convenience you’d be better off taking a taxi or a private transfer between the port and the airport. Not only will the driver be able to to get closer to your ship than any form of public transport, you also won’t have the hassle of carrying large amounts of luggage around. Highly recommended are Shuttledirect who provide private transfers to and from the Port of Málaga. They can cater for any group size and will also take passengers to and from any hotels in the city on request. 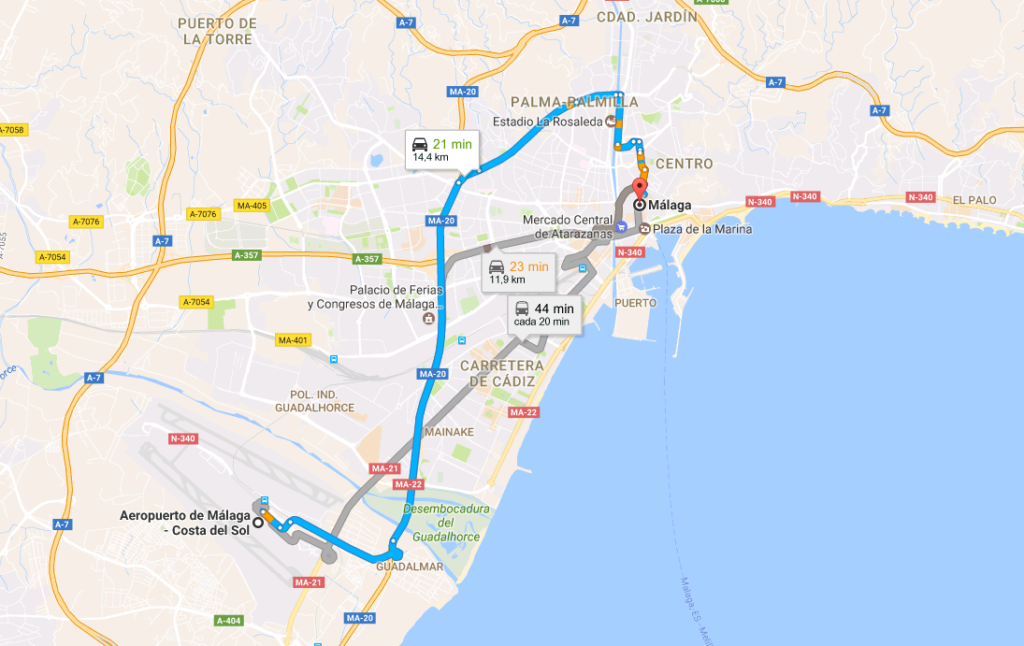 Getting Around in Malaga

Once you’re in the city of Málaga you can walk around all the main tourist attractions. The tourist information office in Plaza de la Marina as you leave the port area is a good place to pick up a leaflet listing suggested walks. From this same square you can take a horse drawn carriage tour of the city.

Another option which is available to cruise ship passengers is the ‘hop-on, hop-off’ bus service which also departs from Plaza de la Marina. In general, this isn’t a great option as most of the main sights are within a very small area within the historic centre which are easily walkable.

Most cruise ships arrive in Malaga at breakfast time then leave in the early evening. This gives passengers a straightforward choice between staying in the city for the day or heading off on one of several exciting excursions:

As your ship approaches its dock look to the north and you’ll spot the Alcazaba: overlooking the city from a small hill. This 11th century fortress-palace is an impressive piece of Moorish architecture which is one of Málaga’s main tourist attractions. Unfortunately, it hasn’t undergone the same kind of restoration as the Alhambra Palace in Granada but is still well worth a visit.

The entrance to it is right next to the city’s impressive Roman Theatre on Calle Alcazabilla. Probably of less interest to visitors but with even better views over the city and port is Gibralfaro Castle which is at the end of a very steep walk from the Alcazaba via Paseo Don Juan Temboury. Unless you’re in very good shape you’d be better off climbing this hill by taxi or by means of the hop-on, hop-off bus service.

Insider Tip: If you’re planning on visiting both attractions, the best value is the joint ticket for the Alcazaba and the Gibralfaro Castle. Entrance is free on Sundays. 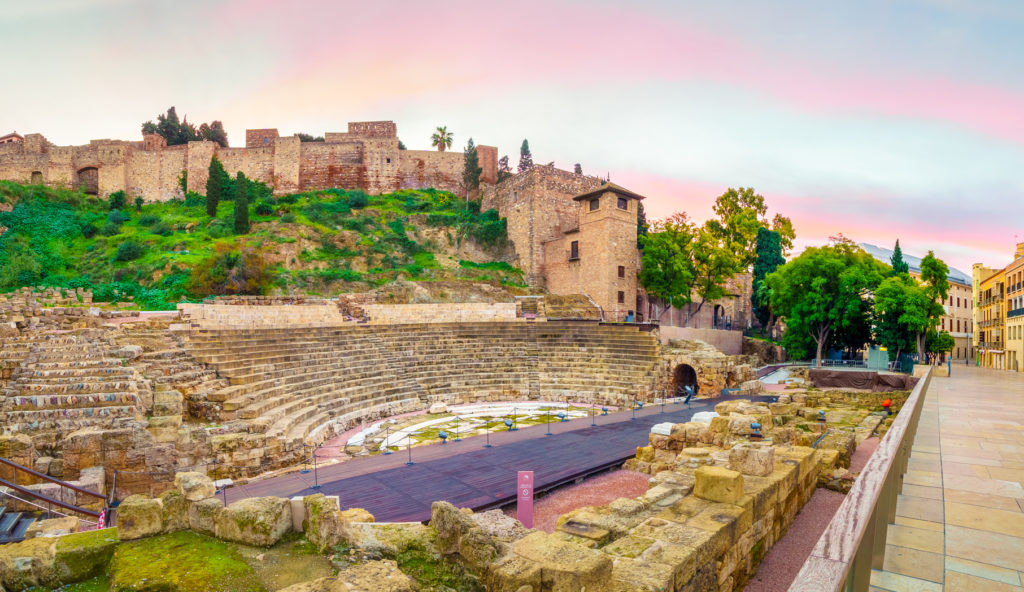 Back in the main part of the city, the main attraction is the enormous Cathedral of Malaga which was built on the site of a former mosque. It is only a short stroll from the Alcazaba. Notice how one of its towers was never finished which led to local people affectionately referring to the cathedral as the ‘one armed lady’. 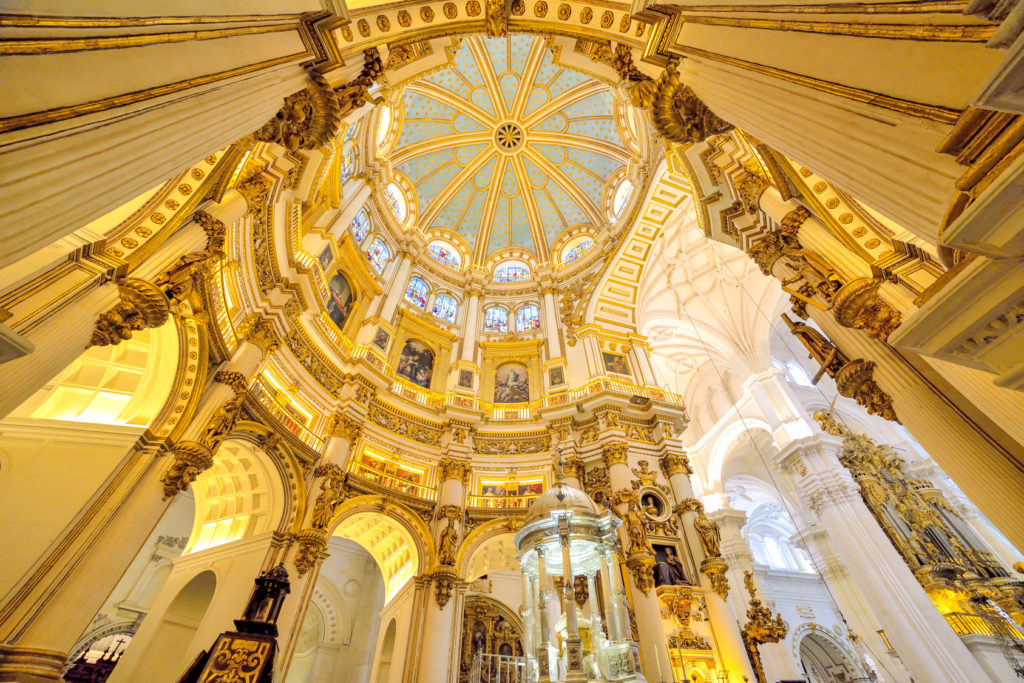 Just a 5 minute walk along Calle San Agustín from the cathedral brings you to the Picasso Museum which is housed in the beautiful Palacio de Buenavista. The family of the famous artist donated this collection of some of his lesser-known works which has helped put the city on the art circuit of Spain. Just 200 metres away is Plaza de la Merced where Picasso was born in 1881, the home of his birth is now the Museo Casa Natal which is open to the public.

Those cruise ship passengers who enjoy paying a visit to the local market when in port are in for a treat in Malaga thanks to the Atarazanas Market which was formerly a Moorish shipyard. This beautiful building is always packed with local people doing their shopping at the many fresh food stalls. The fish section of this port city market is particularly interesting. You can also share a typical ‘fritura de pescado’ at one of the tapas bars inside the market. Just around the corner from the market is an atmospheric old bar which is well worth a visit. Known as ‘Antigua Casa de Guardia’ (Alameda Principal, 18) this Malaga institution has been serving local wines from the barrel since 1840. 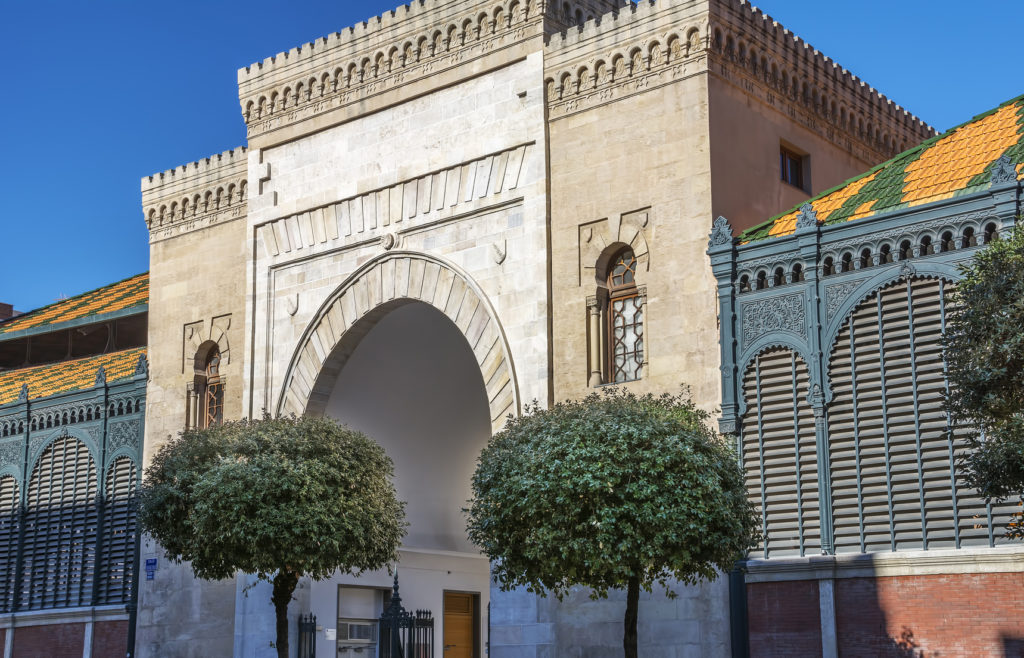 Alhambra Palace: By far the most popular shore excursion from the Port of Malaga is to the Alhambra Palace in Granada. This UNESCO World Heritage Site is Spain’s most visited tourist attraction and once you’ve been there you’ll understand why. The site was originally home to a small fortress before it was developed into the magnificent fortress-palace complex we see today by the Nasrid rulers during the 13th and 14th centuries.

Most official shore excursions take the A-92 road inland to Granada which takes approximately 1 hour 45 minutes each way. Some private operators will take the coast road via Motril on request which takes about the same amount of time. This is a well trodden route with transport companies well aware of the need to get back to port in time for your early evening departure so there’s no need to worry about missing your ship. However, because of the time limitation please note that you do not have time to arrange the return journey by public transport on arrival so be sure to book your trip in advance. 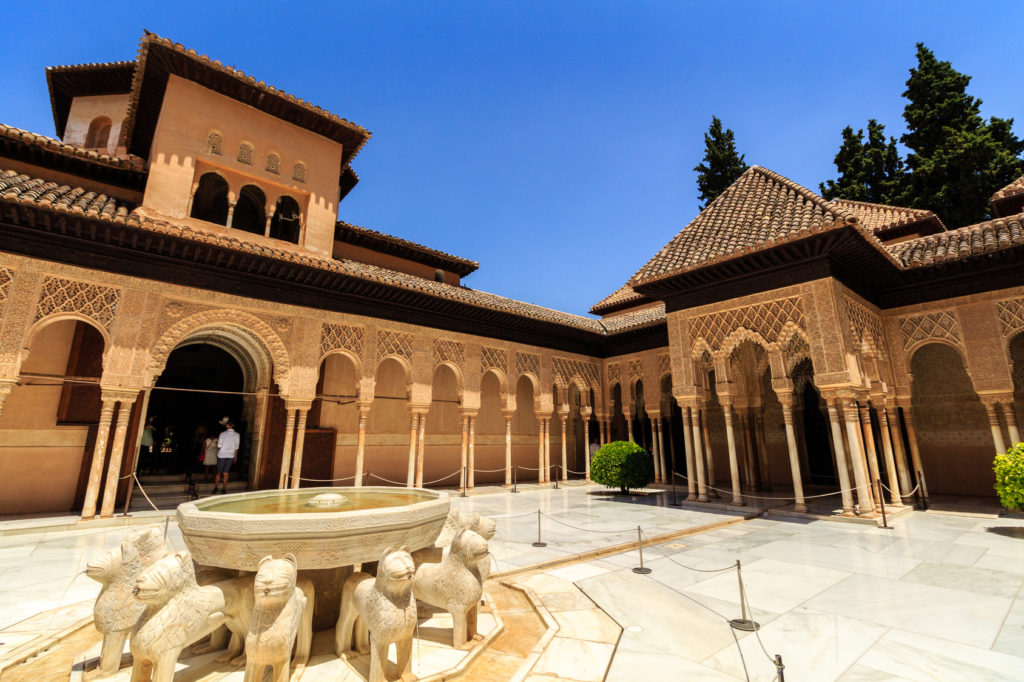 Mijas Pueblo: Passengers can choose to combine a city tour of Malaga with a short excursion to this typical Andalucian village with its whitewashed houses and cobbled streets. It is located just 45 minutes south-west of Malaga’s cruise terminal so a visit can easily be added to your day in port.

Caves of Nerja: Just 60km in the opposite direction lies a remarkable cave system which comes high on Spain’s most visited attractions. Only a small part of the 5km of immense caverns is open to the public but this is enough to appreciate what is one of Europe’s largest cave structures. Again you could combine a visit to the caves with some time looking around Malaga City. 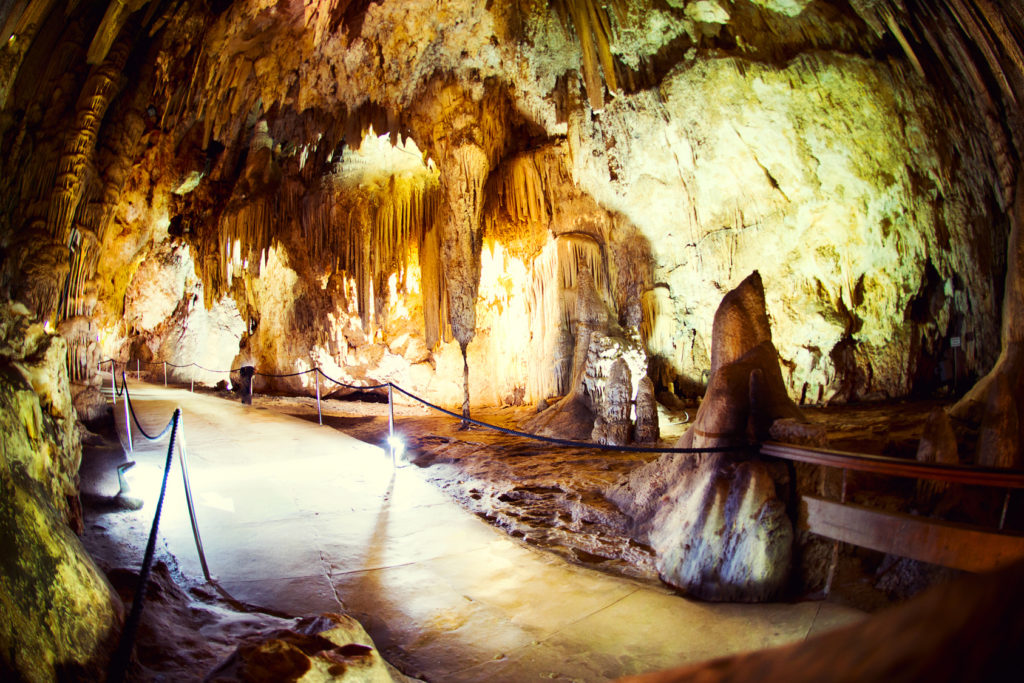 One Night in Malaga

A lovely way to spend an evening in port is to take a stroll from Plaza de la Marina along the beautiful ‘Palmeral de las Sorpresas’ (‘Muelle Dos’) waterfront promenade where there are plenty venues for a pre-dinner drink. Further around the bay is ‘Muelle Uno’ which is an impressive open-air leisure complex complete with a shopping mall and upmarket restaurants and great views of the Alcazaba. For more authentic dining take a stroll along Calle Marqués de Larios and Calle Granada in the old town where you’ll stumble upon a great selection of lively tapas bars and restaurants. For dinner in one of Malaga’s most historic restaurants head for El Chinitas (Calle Moreno Monroy, 4-6) which has outdoor seating on a side street near the cathedral.

Shuttle Direct is the most established and respected airport transfer provider in Europe and northern Africa. Our friendly local drivers will ensure your safe, economical, and convenient passage to and from the cruise terminal, airport, or major train station of your choice with a minimum of fuss. Book your transfer with our easy to use online booking
system and leave the rest up to us!