The fairytale marriage of American actress Grace Kelly to Prince Ranier III in 1956 firmly established the Principality of Monaco on the map of jet-set destinations. This tiny state on the Mediterranean is surrounded by France with the Italian border just 20km to the east. The number of superyachts in its port, as seen by millions around the world at the annual Monaco Formula One Grand Prix, is testimony to its continued popularity amongst the rich and famous.

Monaco’s tax-free status has convinced many wealthy individuals to reside there which in turn has ensured the establishment of many designer stores and exclusive restaurants. Such is the prohibitive price of hotel rooms in Monaco that most visitors arrive on day trips from along the Cote d’Azur or on cruise ships which dock in the Port d’Hercule. Highlights of a day in port include a visit to the famous Casino de Monte-Carlo and watching the changing of the guard at the Palais Princier. For cruise ship passengers who have previously seen the sights of Monaco there are plenty short excursions available to destinations beyond the Principality.

Most cruise ships dock below the Old Town at the ‘Quai de la Nouvelle Digue’ which is next to Port d’Hercule in Monaco’s exclusive harbour. Whilst this dock can accommodate numerous ships at the same time there may be occasions when ships will dock offshore and tender passengers to the Principality. If weather conditions prevent the use of tenders, ships may be forced to dock at Villefranche-sur-Mer to the south and transfer passengers into Monaco by road. 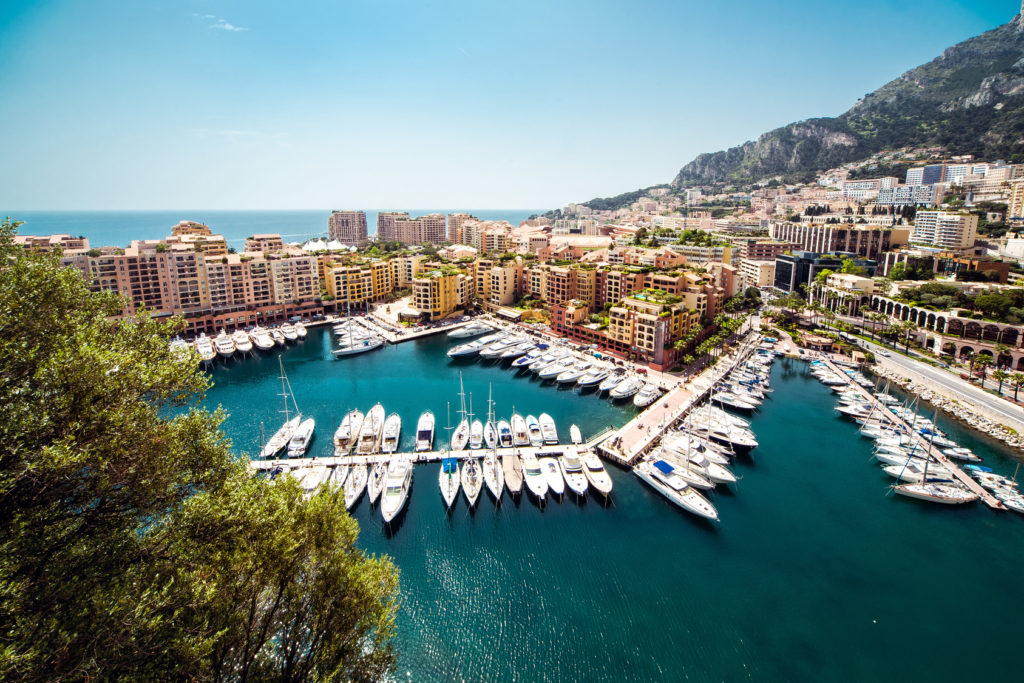 Passengers who are beginning or ending their cruise in Monaco will most likely be arriving or departing through Nice Côte d’Azur Airport which caters for national airlines and budget carriers from all over the continent. The airport lies 33km south-west of Port d’Hercule and is well connected with the Principality.

It’s not uncommon to see new arrivals at Nice Airport boarding helicopters for the short flight to Monaco. However, for the majority of travellers the most common way of getting there is by taxi or on a private transfer from Nice Airport. Shuttledirect provide such a service directly to cruise ships as well as to any other destination along the French Riviera.

Public transport options include the Airport Express Bus #110 which runs from the airport terminals to Menton with stops at Monaco Place d’Armes and Monaco Casino. Buses do not go directly to the port. Trains run from Nice Airport to Gare de Nice-Ville in the city from where services run to Monaco (Gare de Monaco-Monte Carlo).

Getting Around in Monaco

Once you get to Monaco-Ville or Monte Carlo most attractions are easily accessible on foot. However, these touristy areas are quite a climb from the port so it’s highly recommended that cruise ship passengers make their way to the Old Town by means of the very useful system of lifts and escalators. The nearest one to the cruise terminal is at the ‘Parking des Pecheurs’ which delivers passengers to the Oceanographic Museum in the Old Town in two stages.

‘Bateau Bus’ water taxis cross the harbour from the cruise ship terminal dropping passengers at Quai Kennedy. From here there’s a lift up to the casino. Alternatively, there are taxi ranks near the port but queues are often excessive.

Cruise ship passengers wanting to explore beyond the confines of Monaco should head for the Gare de Monaco-Monte-Carlo railway station (Place Sainte Dévote). There are frequent services running all along the Côte d’Azur to Cannes in the west and Menton in the east. 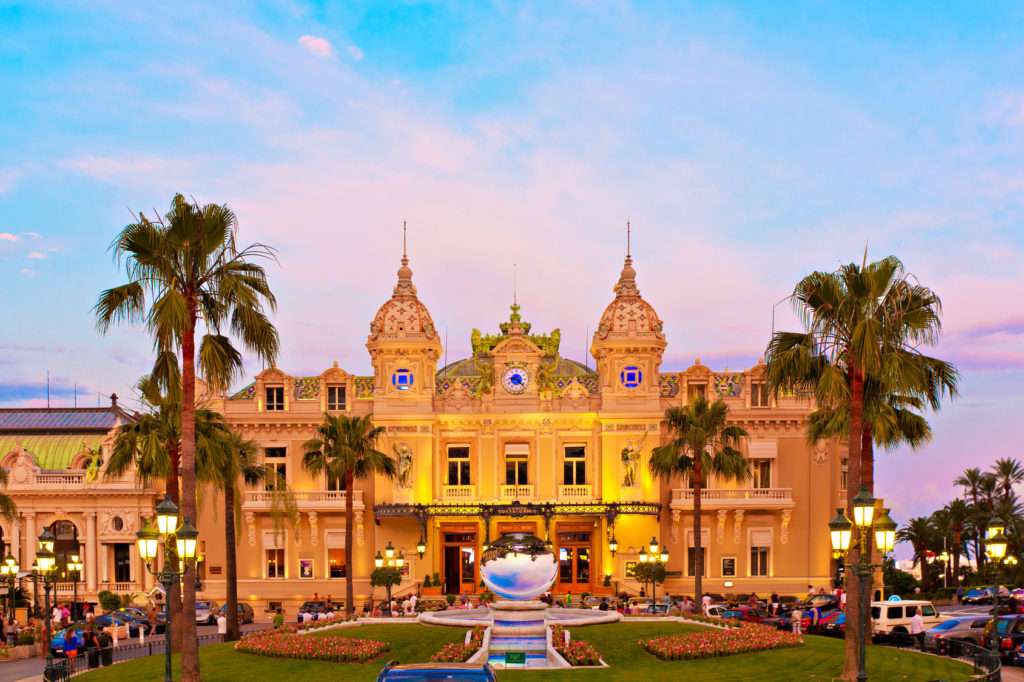 For the purpose of tourism it is Monaco-Ville and Monte Carlo which are home to the main attractions. Both areas can be visited on foot but getting there can be quite a steep climb from the port so be sure to plan accordingly by locating the nearest lifts. The most famous place to visit is the elegant Monte Carlo Casino (Place du Casino) which is well-known to many as one of James Bond’s favourite hangouts in the 007 movies. There’s an entrance fee to step inside and formal dress is required, however, for the majority of visitors on day trips a look at the exterior of the building is sufficient.

Walking there from the cruise port is quite tiring so it’s a good idea to take a ‘bateau bus’ (boat bus) across the harbour then take the lift up to the casino from the tunnel which is used in the Monaco Grand Prix. Next to the casino is the iconic Opéra de Monte-Carlo (Place du Casino) which has hosted many operatic performances since opening its doors in 1879. 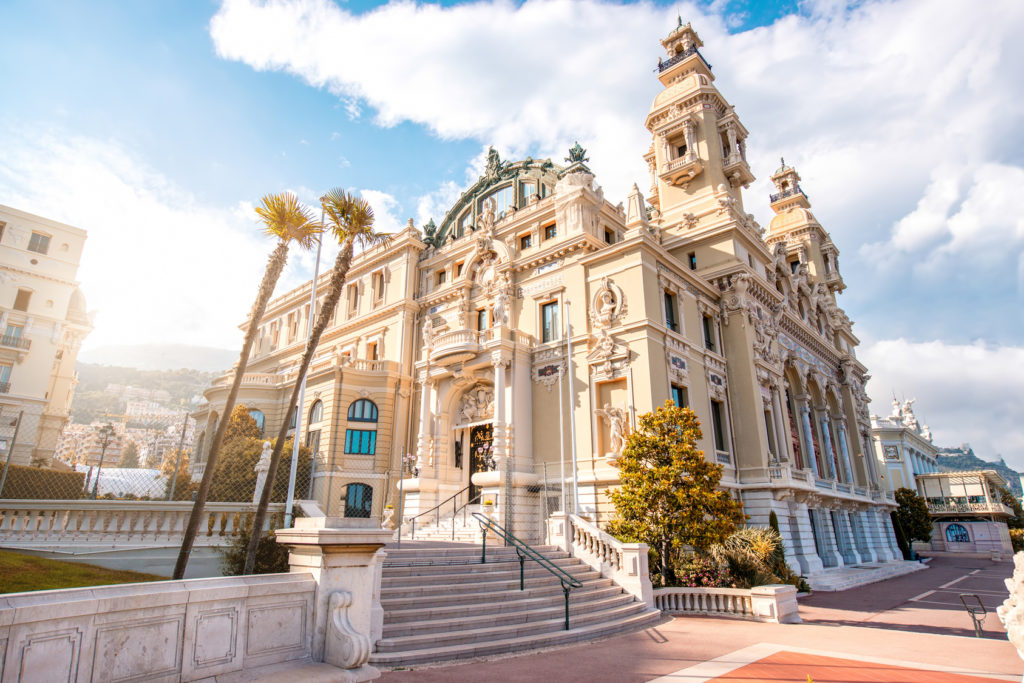 On the opposite side of the harbour in Monaco-Ville is the Palais Princier (Place du Palais) which has been the home of the Grimaldi family since the end of the 13th century. Today it serves as the the official residence of Albert II who is the current Prince of Monaco. The monarch is protected by the ‘Carabiniers du Prince’ whose changing of the guard at 11.55am every day is one of Monaco’s most popular tourist attractions.

Also in the Old Town, within walking distance of the palace is the 19th century Cathédrale de Monaco (4 Rue Colonel Bellando de Castro) which is dedicated to Saint Nicholas and the Musée Océanographique de Monaco (Avenue Saint-Martin). This is one of the finest marine museums in Europe which houses an impressive aquarium containing thousands of species of sea creatures. Another museum of interest to sports car enthusiasts is the Monaco Top Cars Collection (Les Terrasses de Fontvieille) which houses the personal car collection of Prince Rainier III.

Whilst first time visitors to Monaco will find plenty to entertain them during a day in port, returning cruise ship passengers may prefer to head out of town. To the west lies Nice and a number of famous resort towns on the Cote d’Azur whilst to the east is Menton and the Italian border. Some of the highlights include:

Eze (10km): Standing on a cliff overlooking the Mediterranean, this medieval village is a popular excursion from Monaco which is accessible by bus as well as being included in many official itineraries offered by cruise lines. Its main attraction is the Jardin Exotique botanical gardens which are housed in the grounds of what remains of a 12th-century fortified castle.

Villefranche-sur-Mer (15km): The hills overlooking this upmarket resort have allowed Villefranche-sur-Mer to maintain its independence from the million or so people who make up the metropolitan area of Nice to the west. The town is home to a selection of historic buildings and has long appealed to wealthy individuals buying holiday homes. Its deep water harbour allows large ships to dock here including some cruise ships which drop anchor in Villefranche rather than heading along the coast to Monaco.

Nice (20km): The largest city of the French Riviera became popular as a tourist destination in the 18th century when wealthy English families were attracted by its mild winter climate. The main ‘Promenade des Anglais’ with its Belle Èpoque architecture is a reminder of those early days of tourism. Today the city’s historic attractions, charming Mediterranean ambience and thriving restaurant scene have helped make Nice the country’s 2nd most visited city. 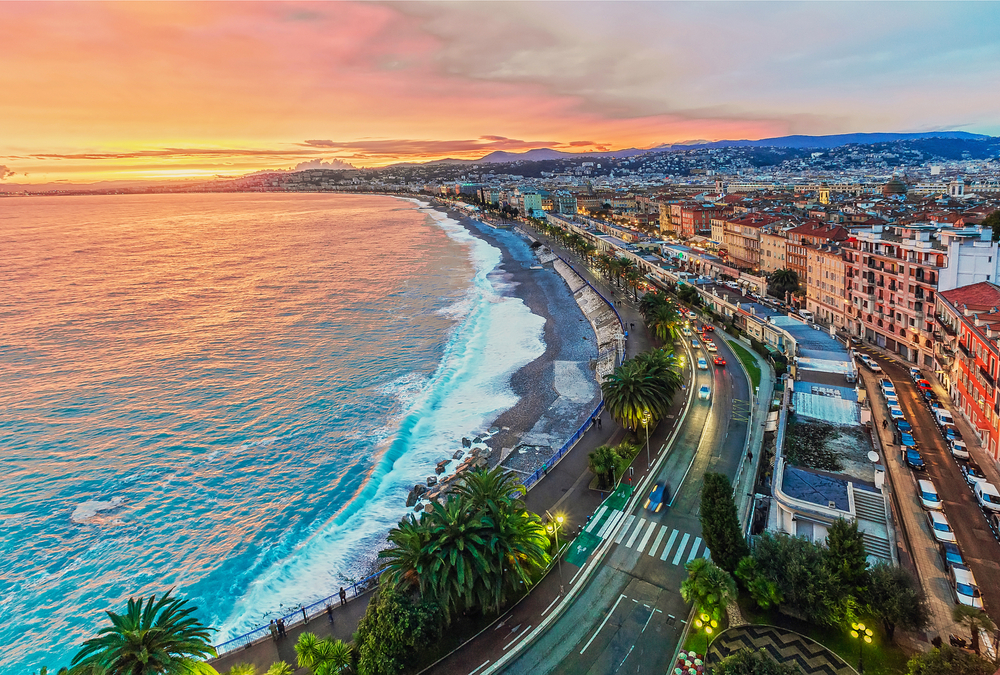 St. Paul de Vence (40km): Inland from the Côte d’Azur this medieval town is often included on day-trip itineraries from Monaco. Overlooking the surrounding countryside the town is built on a hill which was formerly the site of St. Paul’s castle. The town is also home to a number of important art galleries including the Fondation Maeght.

Cannes (55km): Still further along the coast is the city of Cannes which has been associated with the rich and famous since the 19th century when wealthy individuals built grand mansions in the ‘Quartier des Anglais’. Today’s visitors can stroll along the palm-tree lined ‘Promenade de la Croisette’ and admire an array of historic buildings in the Old Town including Notre Dame L’Esperance from where views over the city are quite spectacular.

Menton (12km): Lying just a few minutes along the coast from Port d’Hercule, this attractive town stands close to the border with Italy. Its main attractions include the beautiful Basílica de San Miguel Arcángel and the charming harbour which has long attracted more than its fair share of artists and writers. For great views over Menton and beyond it’s well worth heading 10km into the hills to the historic village of Sainte-Agnes. 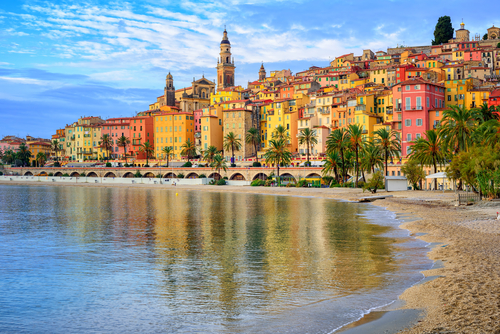 Ventimiglia (30km): Crossing the border into Italy brings visitors to the Italian Riviera which is well-known for its sandy beaches. Visitors can see the remains of a Roman theatre constructed in the 2nd Century AD when the town was an important trading post. Other attractions include the 11th century Church of San Michele Arcangelo together with the Hanbury Botanical Gardens which are considered to be amongst the finest in Europe.

Sanremo (40km): A little further along the Ligurian coast, this Italian holiday resort is best known for its casino and annual Sanremo Music Festival.