Tucked away in a secluded harbour on the Italian Riviera is the stunning port of Portofino which is one of Europe’s most desirable destinations within the superyacht community. Since the 1950s this tiny fishing village which is overlooked by colourful houses built on the surrounding cliffs has been a popular getaway for well known celebrities. Today it retains that air of exclusivity with prices to match ensuring that less wealthy visitors don’t hang around for long after admiring the beauty of the place.

Portofino is a tender port which is more geared towards luxury yachts than it is to cruise liners. As such cruise ships anchor about 600 metres from the coast and passengers are transported to town on tender boats in just a few minutes. Some larger vessels are required to dock off Santa Margherita Ligure to the north and passengers are transported into Portofino by bus. It isn’t uncommon for local sea conditions to prevent access to Portofino in which case cruise ships are usually diverted to the Port of Genoa to the west. 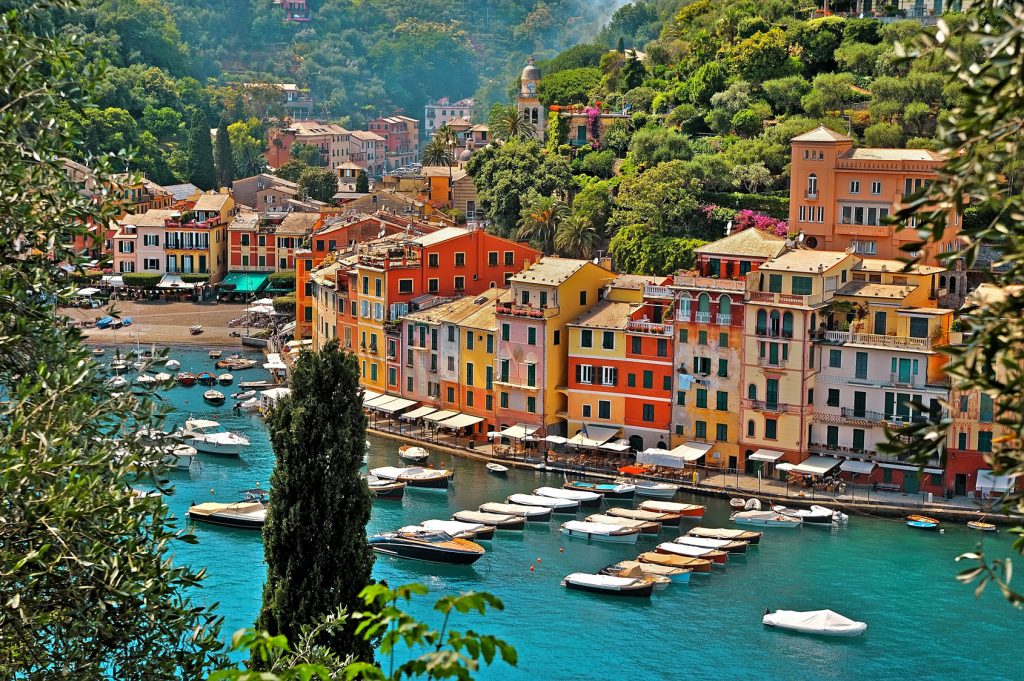 Once visitors arrive in Portofino everything in the small town is accessible on foot and there are a number of well-maintained walking paths to nearby attractions. Frequent ferry boat services depart from the main pier to towns and attractions along the coast. There are also private boat tours which visit a selection of coastal highlights such as Santa Margherita, San Fruttuoso and Camogli.

Anyone flying into Italy to meet cruise ships or private yachts in Portofino should choose to arrive at Genoa’s Cristoforo Colombo Airport which lies just 45km to the west by road. Shuttledirect offer private transfers to Portofino from Genoa Airport. Alternatively, there are train services from Genoa city to Santa Margherita Ligure-Portofino station from where buses and taxis run to the port. 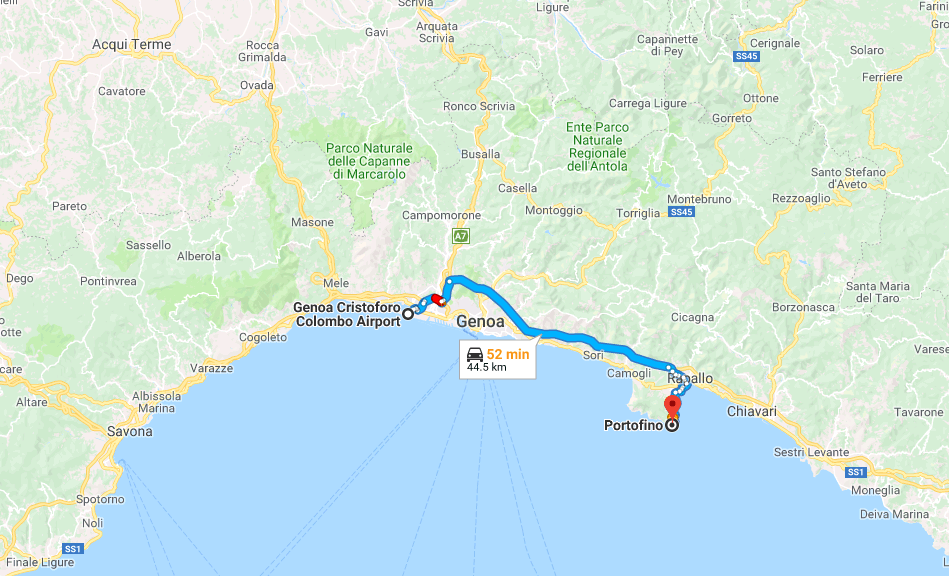 For many visitors to Portofino Milan’s Malpensa Airport, which lies 215km to the north, is more convenient thanks to the number of incoming flights it attracts. Private transfers from Milan Airport can also be arranged on request.

In the heart of Portofino is the Piazza Martiri Dell’Olivetta which overlooks the harbour and is surrounded by colourful cafés and restaurants. Unfortunately, their exorbitant prices aren’t conducive to stopping for a leisurely coffee and absorbing the atmosphere. Instead many visitors prefer to visit some nearby attractions either on foot or by boat.

The first such attraction is the Santurario di San Giorgio which lies just west of the yacht marina some 250m south-east of the main square. The climb up a flight of stairs to get there is well worthwhile for the spectacular views over Portofino and out to sea. Indeed under the Romans this church served as both a place of worship and as a watchtower.

A further 200m along the same headland by way of a steep walkway brings you to the 16th century Castello Brown which once served a defensive role for the harbour. Today it houses a small museum and gardens from where visitors get a picture-perfect view of Portofino. Some visitors choose to continue a further 10 minutes along the well-marked paths through pine forests to reach the lighthouse at Faro di Portofino which offers spectacular views over the Ligurian Sea.

Price Warning: In a town long frequented by the ‘beautiful people’ you’ll most likely be charged around $5 for a bottle of water in a shop and $10 for a coffee at one of the waterfront cafés. This might come as quite a shock to any uninformed cruise ship passengers.

If climbing all those steps is filling you with dread you might prefer a leisurely boat trip along the coast to the Benedictine abbey of San Fruttuoso which stands in a small cove just 5km west of Portofino. Boats leave from the main pier and take about 30 minutes to get there affording passengers great views along the coast. Alternatively, you can take a fairly strenuous hike through some beautiful woodland to visit the abbey and enjoy a refreshing swim before returning by boat. The restaurant of La Cantina on the beach is a good spot for lunch. Some boat trips continue on to the pretty resort of Camogli which lies a little further along the coast.

In the bay off San Fruttuoso there’s a bronze statue known as Jesus of the Abyss which stands at a depth of 17 metres. It was placed there in 1954 close to the spot where Italy’s first scuba diver, Dario Gonzatti, died seven years earlier. Whilst this is a popular site for scuba divers the 2.5 metre high statue is visible to snorkellers and passengers of small tour boats. 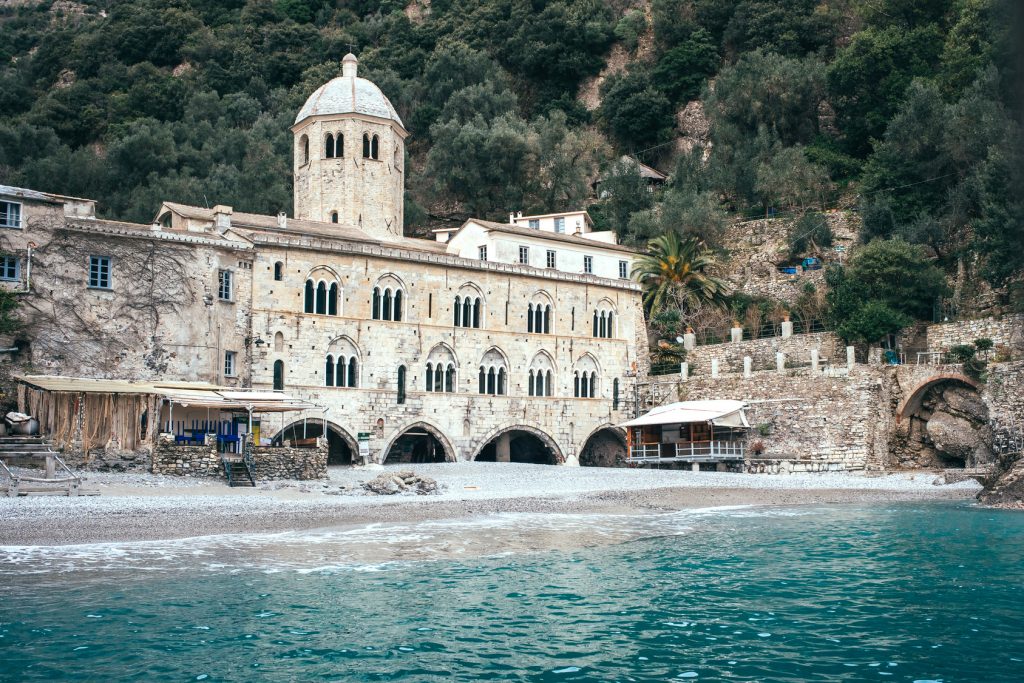 Frequent ferries departing from the Port of Portofino allow for short excursions to a number of ports along the coast. Perhaps the most interesting is to Rapallo which is home to a 16th century castle which was built to protect the town from pirates. Visitors can also take a funicular from the town centre which climbs 600 metres up a mountain to visit the 16th-century Sanctuary of Montallegro. Closer to Portofino and accessible by bus or on foot along a 5km boardwalk is Santa Margherita Ligure which is one of the coast’s most attractive resort towns.

Whilst cruise ships docking in Genoa frequently offer shore excursions to Portofino the reverse excursion is less likely to be made available as there is plenty of interest locally. Nevertheless a visit to Genoa is an option which is highly recommended thanks mainly to its Renaissance palaces which are recognised by UNESCO as a World Heritage Site. To get there by public transport passengers would need to take a local bus to Santa Margherita Ligure then travel by train into Genoa.