For many travellers in their later years of life, a river cruise is the perfect way to sample the wonders of Europe with comfort, convenience, and style. After all, once you’ve earned your retirement, backpacking and hostels are somewhat less than appealing. With their gentler pace and minimal logistical hassle – no hotel rooms to book here! – river cruises are often popular with older globetrotters, yet they offer a treasure trove of sights and experiences to satisfy even the most restless explorer.

The Danube, Europe’s second-longest river, is one of the most popular waterways for cruising. Passing through some of the continent’s most vibrant cities, this mighty river promises ever more spectacular sights around each bend.

Any cruise on the Danube is sure to pass through Budapest, the Hungarian capital that’s experiencing a tourist boom in the European travel sphere. When you disembark for a cruise stopover here, you won’t want to waste any time in diving right in – here’s how to spend those precious hours. 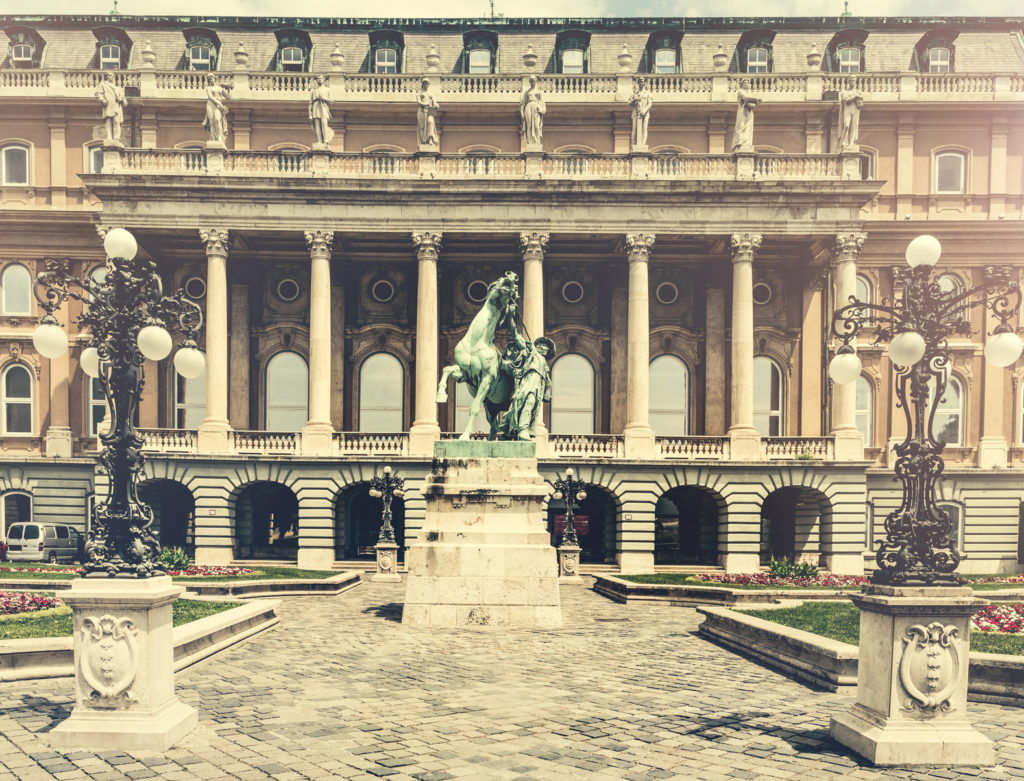 Explore Hungarian art, culture and history as you stroll through Buda Castle, or the Royal Palace.

Start the day at Buda Castle (also called the Royal Palace), a sprawling Medieval, Baroque, and 19th-century complex that dominates Castle Hill on the Buda side of the river. First completed in 1265, Buda Castle has been demolished and rebuilt half a dozen times in the past seven and a half centuries. Today the castle, part of a designated UNESCO World Heritage Site, houses the Budapest History Museum and the Hungarian National Gallery, as well at the National Széchényi Library. Explore Hungarian art, culture and history as you stroll through this enormous structure, or simply admire the sweeping views of the Danube from the top of the hill.

To get to Castle Hill, take the Budavári Sikló, a funicular railway that links Adam Clark Square with Buda Castle. In addition to providing fantastic views, the railway also saves you a long, steep walk!

Just ten minutes’ walk from Buda Castle, the fantastical-looking Fisherman’s Bastion is perhaps the most stunning lookout point you’ll ever visit. Constructed in neo-Gothic and neo-Romanesque style in the early 20th century, the Bastion is a white stone viewing terrace with several sets of stairs, parapets, and walking paths. Its seven conical towers represent the seven Magyar tribes that settled in the Carpathian Basin in 896. The name of the structure, however, commemorates the guild of fishermen who were in charge on guarding and defending this particular stretch of the castle walls in the Middle Ages.

In front of the Bastion you’ll see a bronze equestrian statue of King Saint Stephen, widely considered the founder of Hungary. Behind you, the late Gothic Matthias Church with its colourfully tiled roof is not to be missed either! 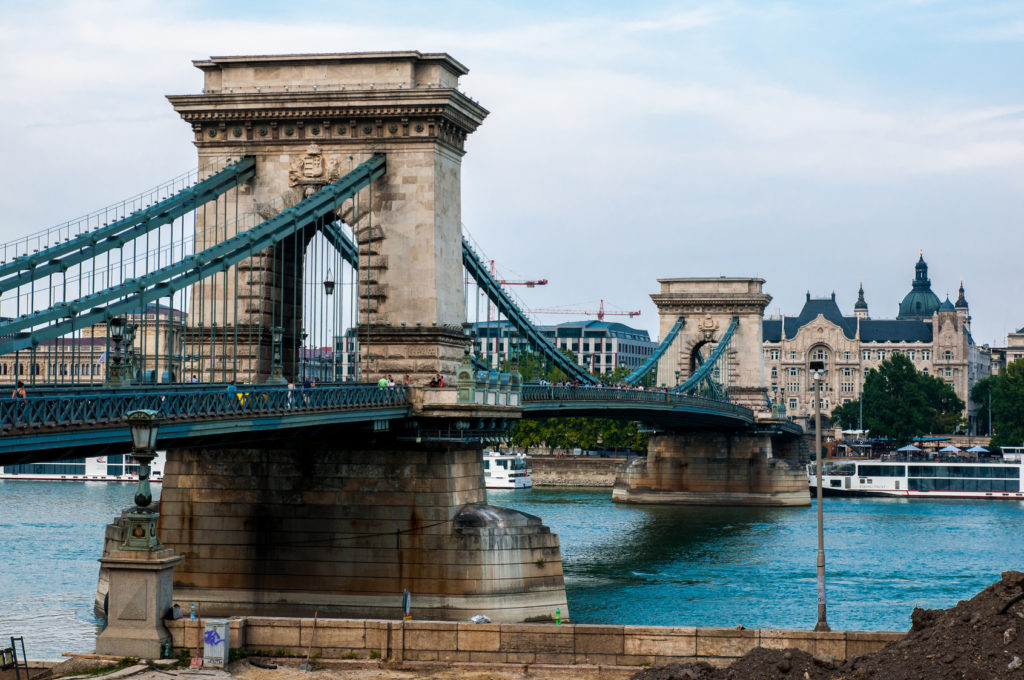 The Széchenyi Chain Bridge has come to symbolise the linking and unity of East and West.

From the top of Castle Hill, you’ll probably have noticed the magnificent suspension bridge linking the Buda and Pest sides of the city. The Széchenyi Chain Bridge opened in 1849 to great fanfare, widely regarded as one of the modern world’s most impressive engineering feats. As the first permanent link between the two sides of the Danube in the capital, the Chain Bridge has come to symbolise the linking and unity of East and West.

To get to the Chain Bridge, come down Castle Hill via the funicular railway, which will deposit you right at the western end of the bridge. 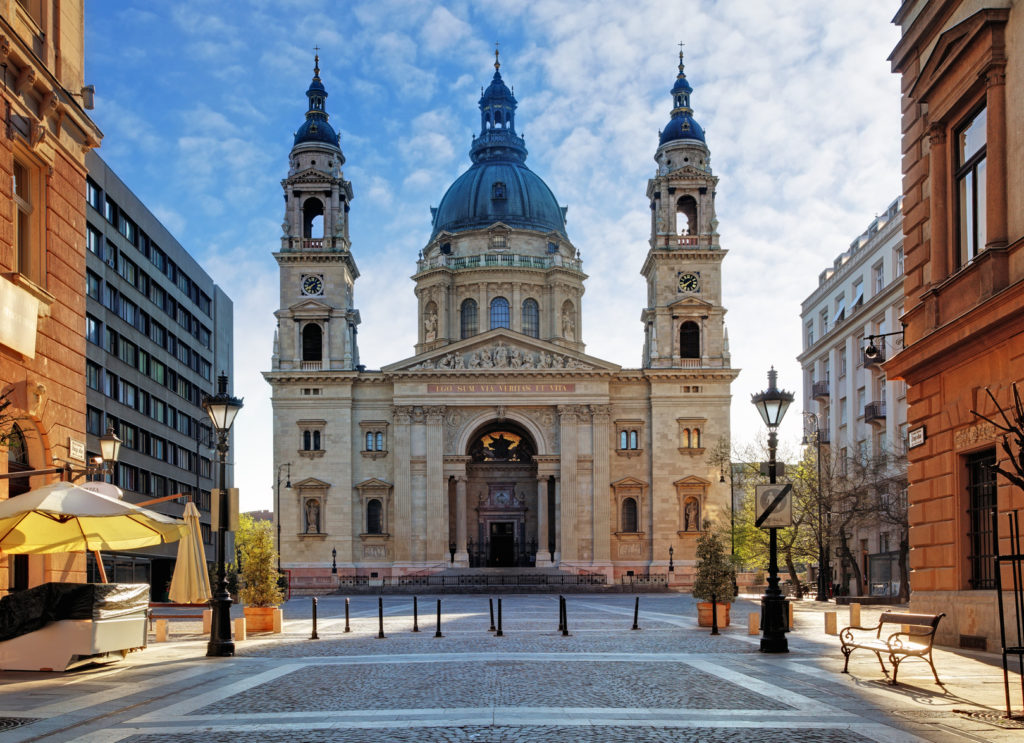 The Basilica of St. Stephen commemorates Stephen, the first King of Hungary.

From the Pest end of the Chain Bridge, this Neoclassical Roman Catholic basilica is just over a ten-minute walk. As you approach, you’ll see the soaring 96-metre dome and the two bell towers that dominate the western façade. Completed in 1905, the Basilica of St. Stephen commemorates the king you saw cast in bronze at the top of Castle Hill. Inside, behind the main altar is a reliquary that holds the mummified “Holy Right” hand of St. Stephen himself – an object of great devotion among Hungarians especially.

For a fantastic view, climb the 364-step spiral staircase (or take the lift) to the dome’s observation deck – truly a sight you’ll never forget.

After a busy morning, treat yourself to a hearty Hungarian meal. Around the corner from the Basilica you’ll find Belvárosi Lugas Étterem, a cosy little spot serving up deliciously filling regional cuisine. Try the stuffed cabbage or deer stew if you’re feeling adventurous, or indulge in the national favourite, goulash.

For all of its beauty, Budapest has a harrowing past. The House of Terror museum, which opened fairly recently in 2002, is living testament to that fact. Located in the former headquarters of communist Hungary’s secret police, the museum focuses on the fascist and communist dictatorial regimes of the 20th century. The building, once the site of sham trials, torture, and execution, is now a sobering reminder of Hungary not-so-distant past, as well a memorial to the victims of the two regimes.

Much of the information in the exhibits is in Hungarian, but you’ll find information sheets in English in each room of the museum. No photography or videography is permitted inside.

To get to the museum from lunch, walk northeast along Andrássy út, or take the Metro line 1 from Bajcsy-Zsilinsky út two stops to Oktogon station. 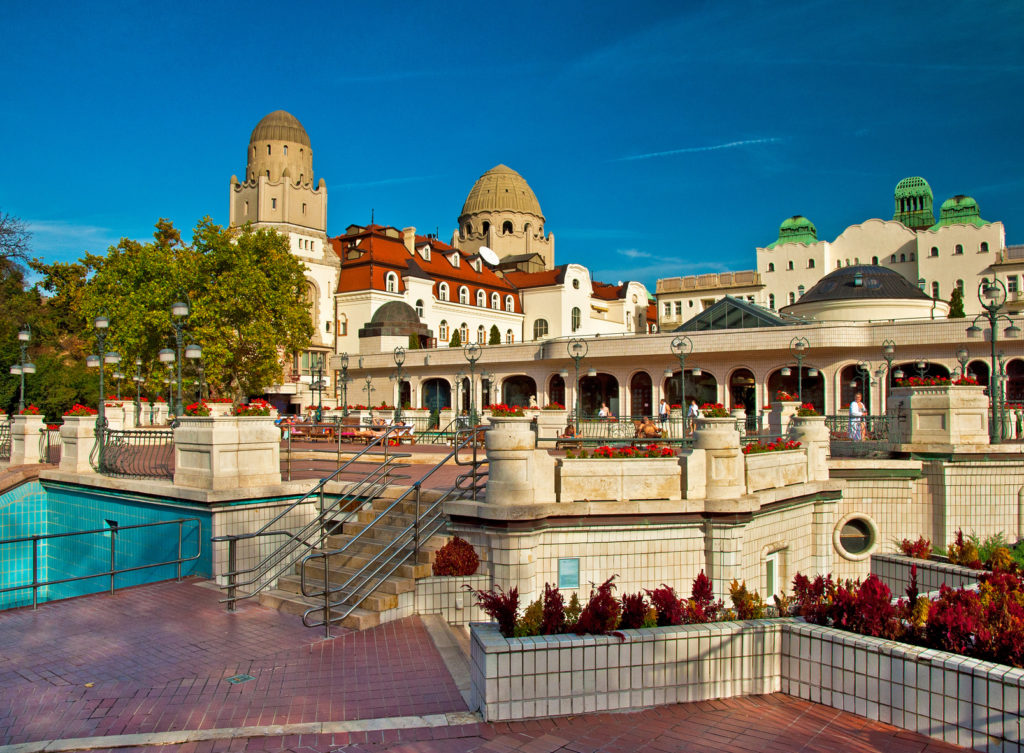 End the day in a relaxed manner by dipping into the thermal pools within the Hotel Gellért.

After a tour through the House of Terror, you might fancy taking it a little easy for the next hour or so. Hop on Metro line 6 and head back across the river to the famous Gellért Baths, a huge complex of thermal pools within the Hotel Gellért. Wade into one of the eight beautifully tiled thermal baths and let the steamy, mineral-rich water take all your cares away. The spa is famous for its cavernous main hall, built in Art Nouveau style and topped with a glass roof. Some even compare it to taking a bath in a cathedral!

End your day with a leisurely stroll along the Duna Corso, a pedestrian-friendly promenade along the Danube on the Pest side. To get there, cross the Liberty Bridge and take Metro line 2 from Fovám tér to Eötvös tér. While you’re in the vicinity, stop for dinner at Dunacorso Restaurant. Enjoy excellent Hungarian food with a spectacular view out on the terrace as you gaze out at Buda Castle where you began your day.

How to Get to Budapest

There are several ports and docks in Budapest, but many cruise ships dock above five kilometres north of the city centre. To make the most of your brief cruise stopover, look into Budapest transfers to get you into the heart of the city quickly and efficiently. At the end of the day, when your feet are tired out from a day of walking, another transfer back to the ship is easily arranged through our online booking system.

Book your airport transfers with Shuttle Direct and you’ll enjoy the service of the most renowned operator in Europe and North Africa. Our easy to navigate online booking system allows you to book your travel arrangements and receive immediate confirmation. You’ll be met at the airport of your choice and a friendly, experienced driver will transport you and your luggage directly to your accommodation via the fastest, most convenient route. Shuttle Direct’s range of shared and private transfers offers something for every budget.