Overlooking the Bay of Naples amid lemon groves on Italy’s Amalfi Coast stands the grand old resort of Sorrento. This charming town oozes a quintessential Italian atmosphere where visitors can amble around the piazzas of its historic centre pausing for refreshments at its inviting cafés or head off to visit some world-famous attractions such as Mount Vesuvius, Pompeii or the Island of Capri.

The Port of Sorrento is exclusively a tender port so cruise ships drop anchor offshore and passengers are transported to the dock at Marina Piccola by tender boat. On occasions when the sea is too rough cruise lines are forced to cancel stops at Sorrento as tender services are unable to operate. From the port there are ferry services to Positano and Amalfi which lie further along the Amalfi Coast as well as to Naples and Capri. Otherwise you’ll need to head into the town of Sorrento which stands on a cliff overlooking the marina. 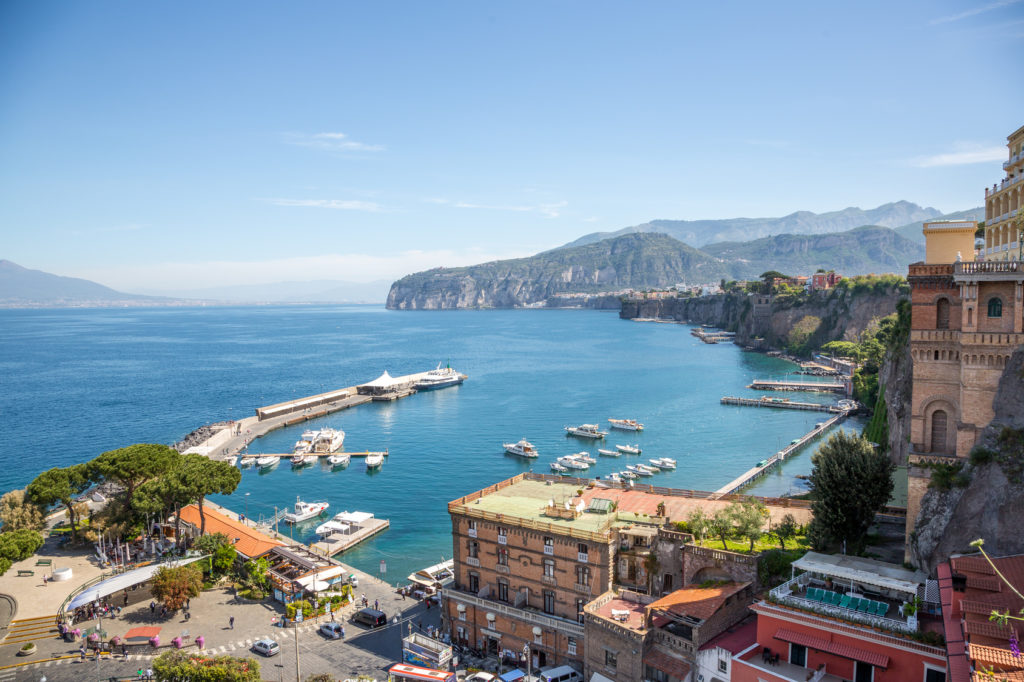 Transfers to and from Naples Airport

Passengers who are beginning or ending their cruise in Sorrento will usually travel through Naples International Airport which lies 55km north of the Port of Sorrento by road. There are airport buses which travel to the city’s main train station at Piazza Garibaldi and to the main Molo Beverello wharf in the port area. Passengers can then travel between Naples and Sorrento by train or hydrofoil. A far more convenient option is to pre-book a private transfer from Naples Airport to Sorrento (or vice versa). If travelling in either direction by taxi you’d be advised to confirm the fixed rate tariff before departing. 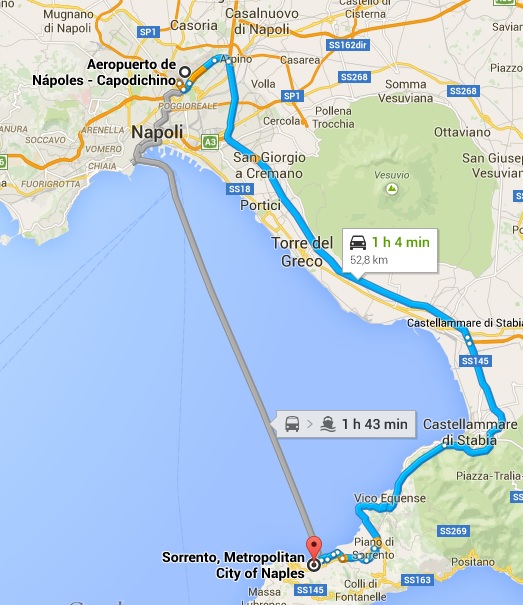 Getting Around in Sorrento

From the Marina Piccola where tender boats drop off passengers it’s a steep uphill walk into the town of Sorrento. Most passengers prefer to take the blue bus to Piazza Tasso in the town centre or walk 10 minutes along the coast to the Sorrento Lift (Piazza Francesco Saverio Gargiulo) which takes passengers into town. Once in the centre it’s easy to visit all the local attractions on foot.

Passengers planning on taking DIY excursions from Sorrento should take the orange bus from Marina Piccola which goes to the train station. From here there are trains heading for Naples with stops at Herculaneum and Pompeii. In addition there’s a bus stop outside from where there are departures to Positano and further along the Amalfi Coast.

Taxis are available from the port for the short journey into Sorrento or for longer journeys which take in the scenic coastline. Whilst this can prove an expensive way to travel a taxi shared amongst four passengers (at a pre-agreed price) can prove to be an efficient way to discover the spectacular Amalfi Coast.

Once cruise ship passengers have made their way up to Piazza Tasso, the town’s main square, they will discover a small but charming old centre where it’s easy to while away a few hours. A number of historic attractions are well worth a visit including the beautiful Sorrento Cathedral which has a long history dating back to Moorish times. Numerous reconstructions over subsequent centuries explain the variety of architectural elements which it displays culminating in a predominantly 15th century Romanesque style. The 14th century Chiesa di San Francesco (Piazza Gargiulo, 8) is another attractive church with beautiful cloisters which has become a popular venue for British couples who come to Sorrento to get married. 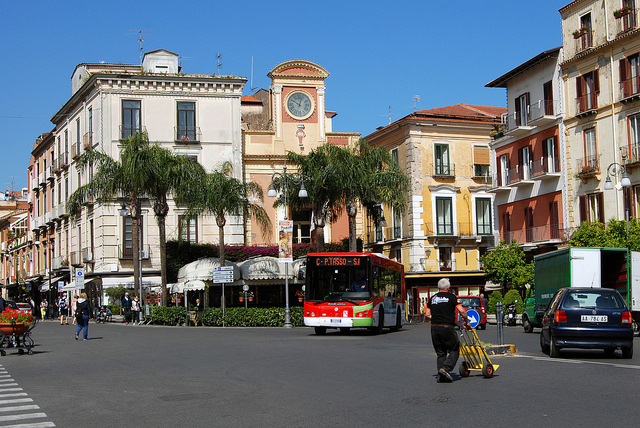 The town’s main museum is the Museo Correale di Terranova (Via Correale, 50) which is home to artwork by 17th and 18th century Neapolitan painters. Even if you’re not interested in the art it’s worth a visit just to see the lovely villa in which the museum is housed together with its surrounding gardens.

Insider Tip: Surrounding Sorrento’s main piazzas you’ll find any number of terrace cafés where you can take a coffee break or sample a glass of the local ‘limoncello’ liqueur. And if you find yourself a seat at lunchtime you should try a wood fired Neapolitan pizza which originates from the nearby city of Naples.

Geographically the Amalfi Coast runs between the Gulf of Naples and the Gulf of Salerno. By road it is only 40km in length, running from Positano in the west to Vietri sul Mare in the east. It is listed by UNESCO as a World Heritage Site.

Independent travellers arriving on cruise ships in Sorrento can catch a bus from outside the train station to the hillside resort town of Positano which appeared on the tourist trail in the 1950s when lauded by John Steinbeck as “a dream place”. Today it is home to a handful of luxury hotels and expensive boutiques looking down over its historic fishing port. There are also boat trips to Positano which depart from Marina Piccola at Sorrento Port. Further along the coast, beyond a number of fishing villages, is the beautiful town of Amalfi which is another highlight of this spectacular coastline. It too is accessible by bus and boat from Sorrento.

Something to bear in mind when planning shore excursions along the Amalfi Coast is that although distances are short, travel times are long. This is a popular destination for Italian tourists during the summer months which frequently causes traffic jams along the coast road. Cruise ship passengers should ensure that they allow plenty time to get back to Sorrento in time for their ship’s departure.

Unfortunately, the majority of cruise ship passengers arriving in Sorrento simply see it as a transport hub as they head off to more famous destinations located in the region. The most popular of these attractions which are accessible by public transport or on official shore excursions offered by cruise lines include the following: 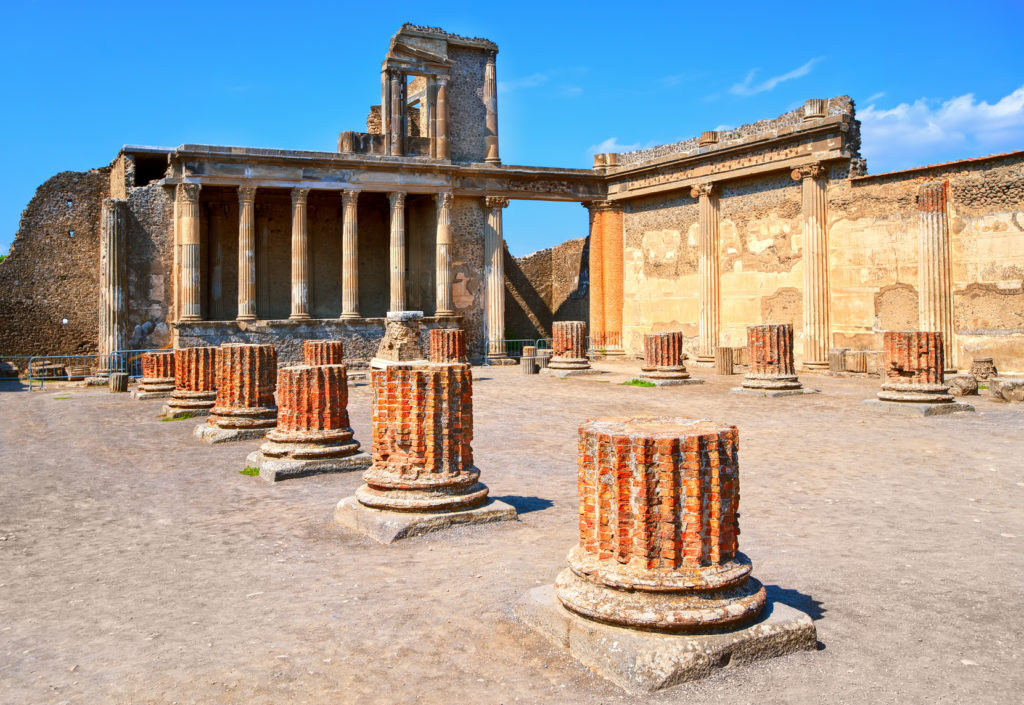 Pompeii, Mount Vesuvius and Herculaneum: The eruption of Mount Vesuvius in 79 AD killed an estimated 13,000 people and buried the region surrounding the volcano in volcanic ash. It was only in the 18th century that the city of Pompeii and nearby port of Herculaneum were rediscovered in such good condition that historians have been able to learn a lot of previously unknown information about Roman life. Now a UNESCO World Heritage Site, the archaeological site of Pompeii is one of Italy’s most visited tourist attractions. Cruise ship passengers are advised to pre-book their day trip to Pompeii on board their ship or with a local agency so as to make the most of their limited time in port. If you prefer to travel independently you can take the train from Sorrento to Naples and get off at Pompei Scavi Station.

Insider Tip: Do not return to your ship before you’ve tried a delicious ice cream from one of the many gelato shops around Sorrento. Gelateria David (19 Via Marziale) takes some beating – they offer a great selection of flavours including the ‘delizia al limone’ which is made from local lemons.

Naples: The city of Naples lies directly across the Gulf of Naples from Sorrento and can be reached by bus, train or preferably by hydrofoil which arrives in the heart of the city at Molo Beverello. The city’s main tourist attraction is the Museo Archeologico Nazionale (Piazza Museo) which exhibits many exceptional artefacts discovered at Pompeii. It is widely considered to be one of the world’s great archeological museums. The city is also home to a number of historic sights, attractive squares and excellent pizza restaurants where you can savour the local speciality. 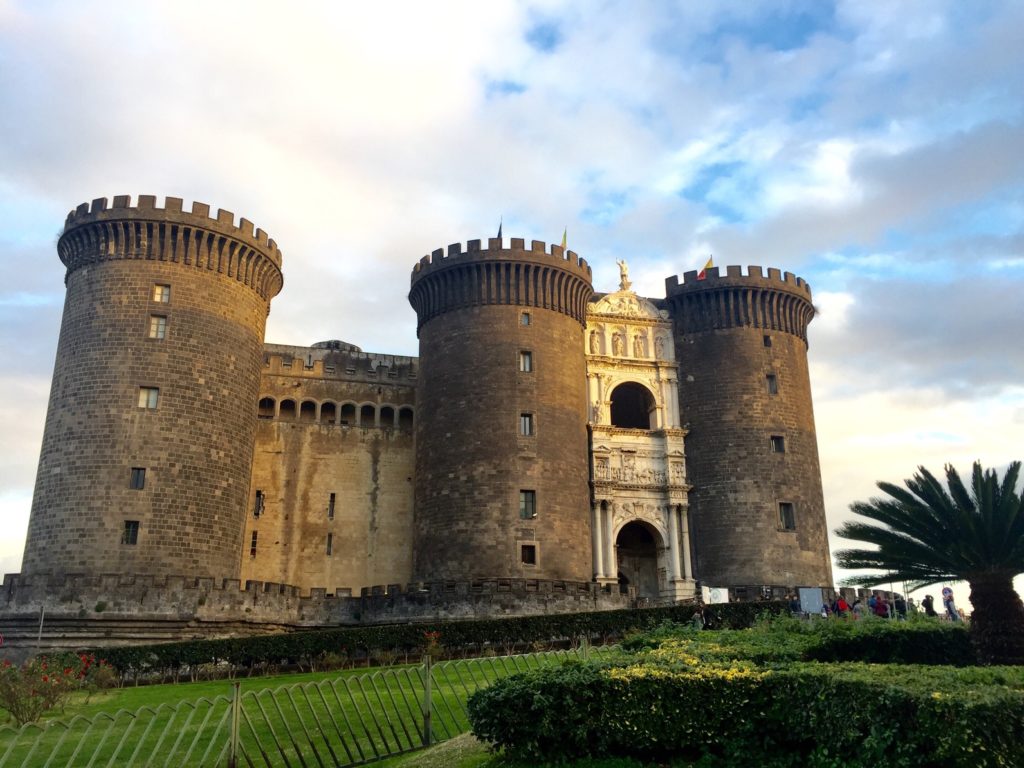 Capri: Another popular trip from the Port of Sorrento is to the island of Capri which lies just 25 minutes away by hydrofoil from Marina Piccola. Once on the island visitors can head for the lovely villages of Anacapri and Capri or take a boat trip to the Blue Grotto sea cave. Services may be cancelled (in either or both directions) on days when seas are deemed to be too rough.