Alanya is a beautiful city on the southern coast of Turkey with a rich history. It has been under the rule of Ptolemaic, Roman, Byzantine and Ottoman empires. As such, the city is an archaeological goldmine, boasting Medieval castles, 13th-century statues and 16th-century churches. With such a fascinating past, it’s no surprise that it has become a popular tourist destination. But with so many great places to see, make sure you don’t miss the best historical attractions! 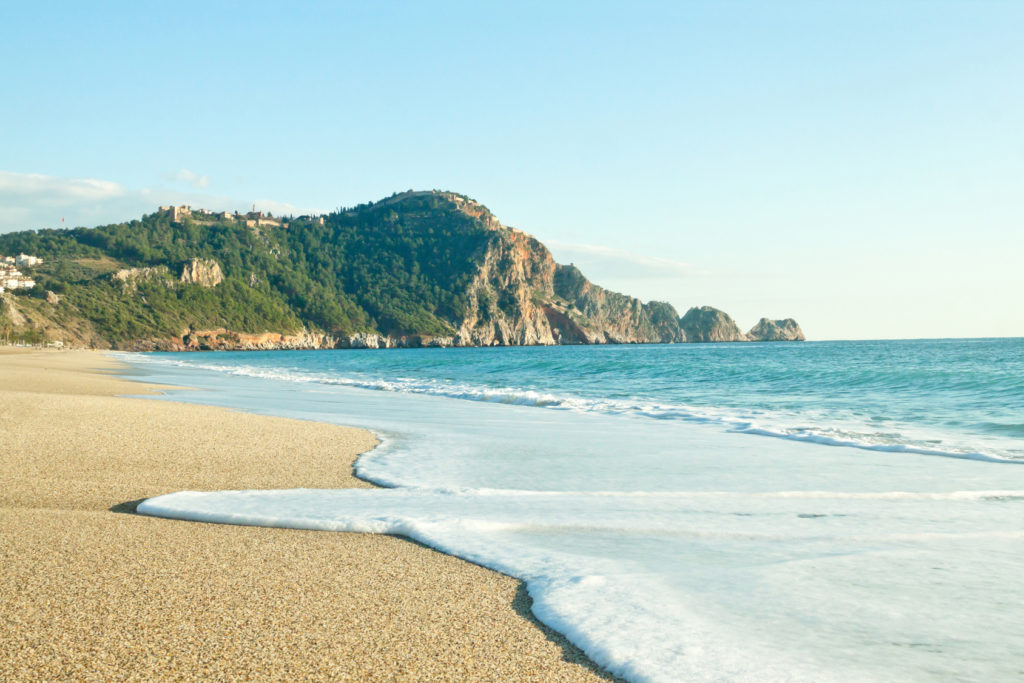 The Red Tower is the unmissable monument on Iskele street, next to the cruise ship port.

The Red Tower is an iconic 13th-century Seljuk monument, combining stones, bricks and marble. First erected as a military defence, its intricate architecture features observation gaps in the walls, a hollowed out central pillar used to store food and water, and an unroofed terrace once used by archers. From its rooftop, you’ll get a stunning view of Alanya and its coast. 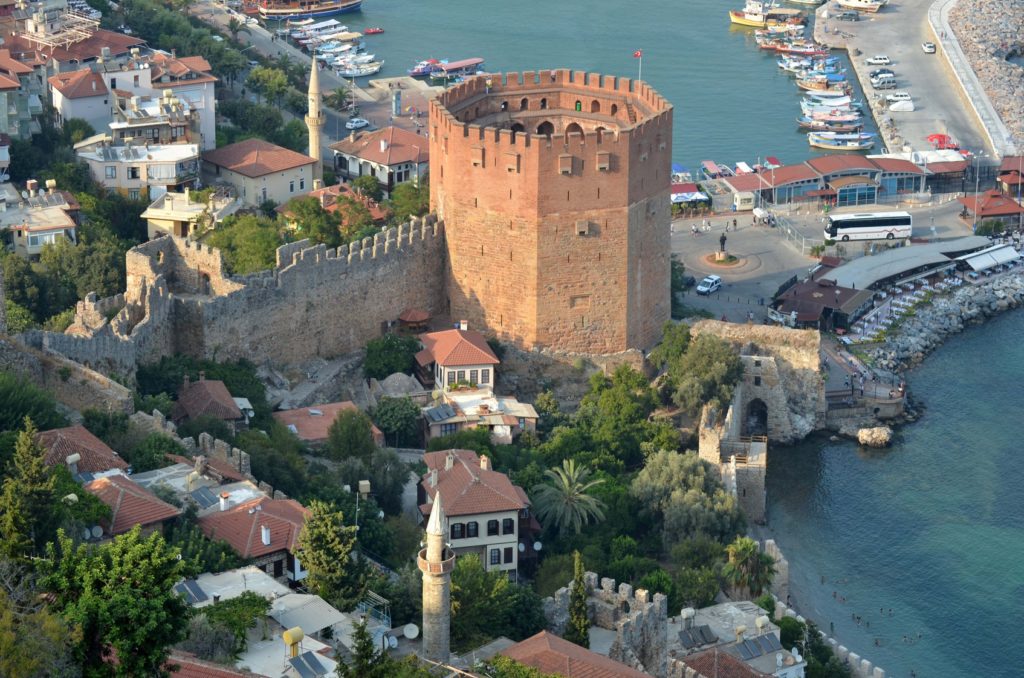 Open 9am-7pm from April to October, and from 8am-5pm in winter. Tickets cost 5 TL.

Alanya Castle is an awe-inspiring Medieval Seljuk castle which is protectively surrounded by a 6.5km wall and its 140 towers. Within the walls, there are also various ruins, including what remains of the original 400 cisterns and the shell of an 11th century Byzantine church. To reach the tower, there is a steep 3.5km climb through Tophane which provides wondrous sights of the coastline and Cilician mountains. If you don’t fancy the hike, the bus 4 will pick you up from outside the tourist office and take you to the castle. Alternatively, a taxi costs 15 TL.

This museum is located on Saray Mahallesi Hilmi Balci Sokak.

This terrific museum takes you back to the Helenistic, Roman, and Byzantine eras, as well as the Seljuk, Ottoman, and Republican periods. Divided into two sections, it has an array of archaeological and ethnographic artefacts. In the first part, there are ancient Anatolian stone inscriptions, letters from Roman emperors and ancient inscriptions in the karamanlis language. In the archaeological wing, discover ceramics, marble, bronze, glass and mosaic. There is also a 7th-century BC coin display and a 2nd century AD bronze statue of Hercules.

The Alanya Archaelogical Museum is open Tuesday through to Sunday from 8am-5pm in winter, and from 9am-7:30pm in summer. Entrance costs 5 TL.

To reach these Turkish quarters, follow the signs towards Alanya Castle until you come to a turn-off for the village of Ehmedek.

Ehmedek was the Turkish quarters during the Ottoman and the Seljuk periods. It’s a brilliant time capsule which encloses a unique 13th-century mausoleum, the Akşebe Türbesi, as well as the oldest mosque in Alanya, the Süleymaniye Camii. There are also charming wooden houses and a former Ottoman bedesten. If you really want to explore Alanya’s history, experience traditional Ottoman life by visiting the KültürEvi.

Insider tip: the city also has an interesting modern history, which you can explore at Atatürk’s House Museum. 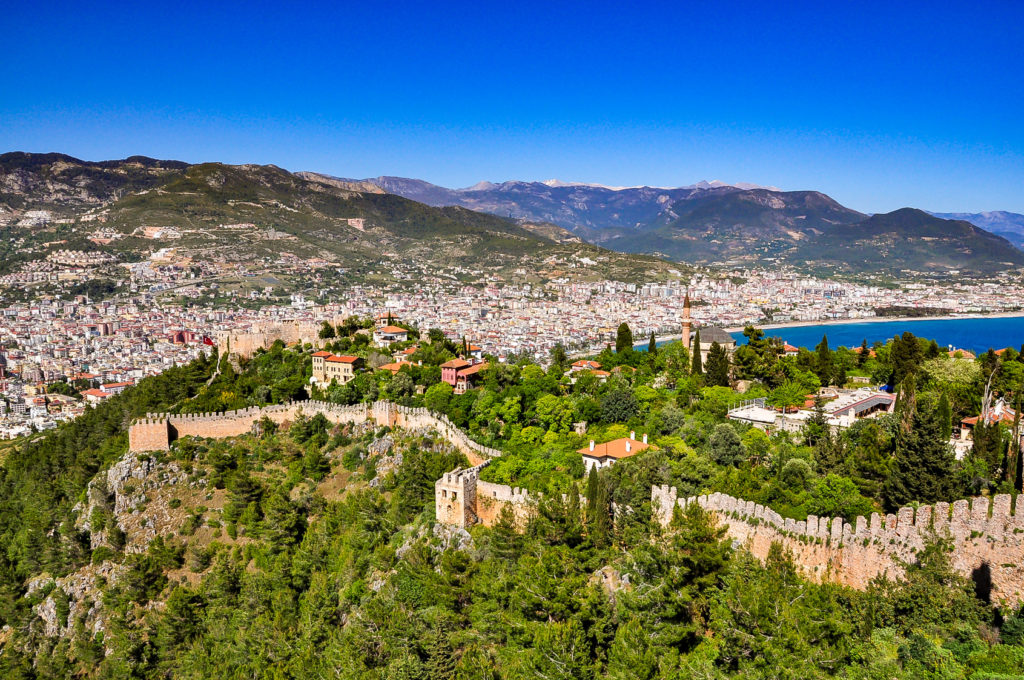 Situated in the centre of Antalya, on Işıklar Caddesi, you can reach it on the Nostalji Tramway. Get off at the Belediye stop, which is right next to the museum.

This museum is a reconstruction of Atatürk’s original villa. Explore the suave interior where the presidential bedroom and offices have been recreated. The ground floor also has a collection of photographs and newspaper articles recounting Atatürk’s visit to Antalya.

Open Tuesday through Sunday, from 9am-7:30pm in April to October, and 8:30am-5:30pm November to March, entrance is free of charge.

How to Get to Alanya

Alanya is served by Antalya airport. Thomas Cook offers a direct four-hour flight from London to Antalya starting at £90. However, these flights are limited, so you may have a stop-over in either Zurich or Istanbul when you fly with Turkish or Pegasus airlines.

It’s just an hour-and-forty-five-minute drive from Antalya to Alanya. If you don’t want the stress of driving on foreign roads, Shuttle Direct offers private airport transfers. One of our friendly drivers will meet you outside the terminal and safely take you to your luxury hotel. You can book your shuttle in advance through our user-friendly website. 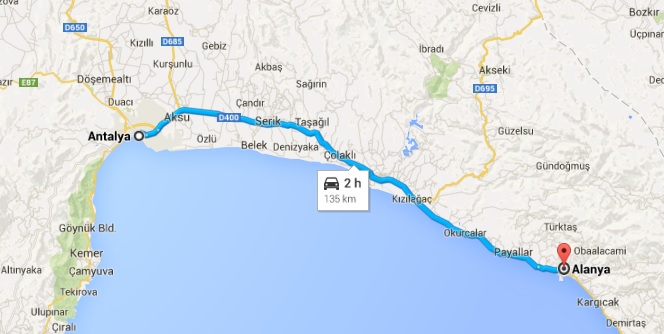 Antique Roman Palace – This 4-star hotel combines luxury and style. The beach is just a minute away and has sun loungers and parasols free of charge. The rooms are air-conditioned and feature a stunning view of the sea. There is also a soothing Turkish bath and swimming pool.

Grand Okan Hotel – Centrally located on the popular Cleopatra Beach, this hotel is ideal for relaxation. It offers massage treatments and has both a sauna and swimming pool. Every room is spacious and provides a stunning coastline view, while the restaurant serves mouth-watering regional and international dishes.
Club Paradiso – This hotel is ideal for tranquillity. It’s secluded from the busy tourist areas, but its free shuttle will take you to Analya’ city centre or the private beach in just a few minutes. While the hotel boasts in-house shops, a spa facility and delicious restaurant, the rooms also have a lovely décor with wooden fittings and marble bathrooms.

Shuttle Direct offers shared, group and private transfers across Europe and North Africa. Thanks to its hassle-free transfer service and easy online booking, it has become one of the most respected transfer providers.