With its dramatic mountains, inviting beaches, and clear waters, the coast of Spain is some of the best cruising territory around. But if you’re looking to mix your on-board relaxing with a few forays into Spanish culture, the real highlight will be your stopovers in the many vibrant cities along the coast – and Valencia should be at the top of your list! This ancient city founded by the Romans is alive with culture and heritage – not to mention the fantastic cuisine.

When your ship pulls into port here, you’ll want to be ready to explore everything this city has to offer during your stopover.

Can’t get enough of Spain? Dive into Barcelona.

The logical place to start your tour is in Valencia’s historic centre and old town, or Ciutat Vella. Inhabited first by Roman colonists, then the Visigoths and Muslims before the Christian Reconquista, this area clearly demonstrates the influence of different conquerors over the centuries. The narrow alleyways of the old town can be confusing, so it’s best to bring a map! 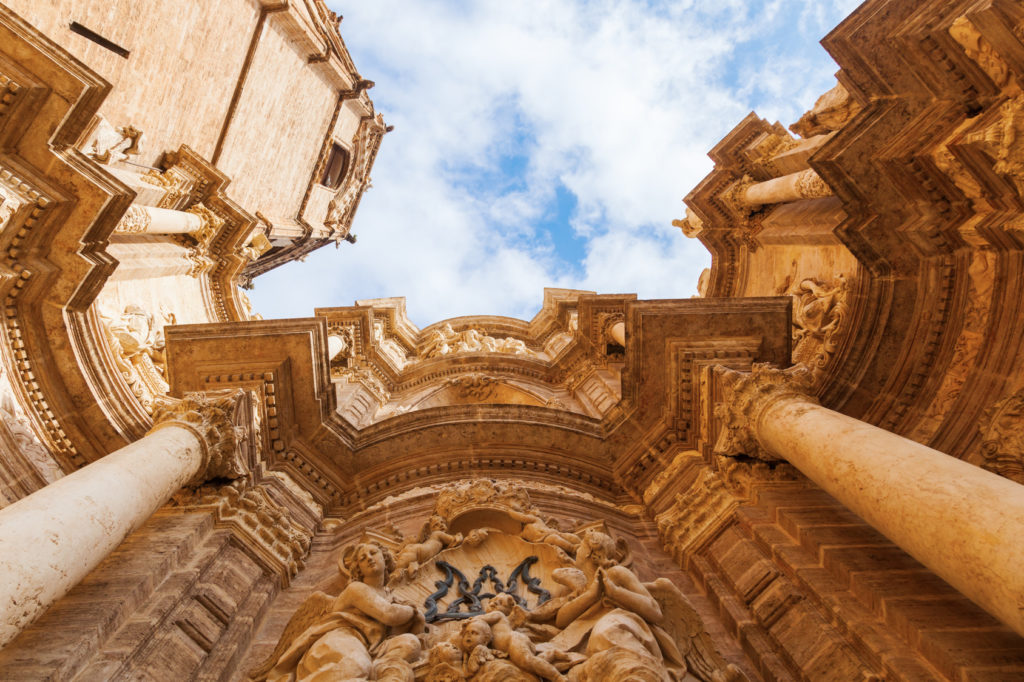 As you explore the Ciutat Vella, make your way over to Valencia Cathedral in the Plaça de l’Almoina. Built over the former Visigothic cathedral which the Moors later turned into a mosque, this Roman Catholic cathedral displays a hodgepodge of architectural styles including Romanesque, Gothic, Renaissance, Baroque, and Neoclassical. (If you’re any kind of architecture buff, the cathedral will make a fascinating study!) Inside one of the chapels is a chalice dating from the 1st century believed by many Christian historians to be the true Holy Grail. The cathedral is open daily with an admission fee of €4.00, which includes the use of an audio guide. 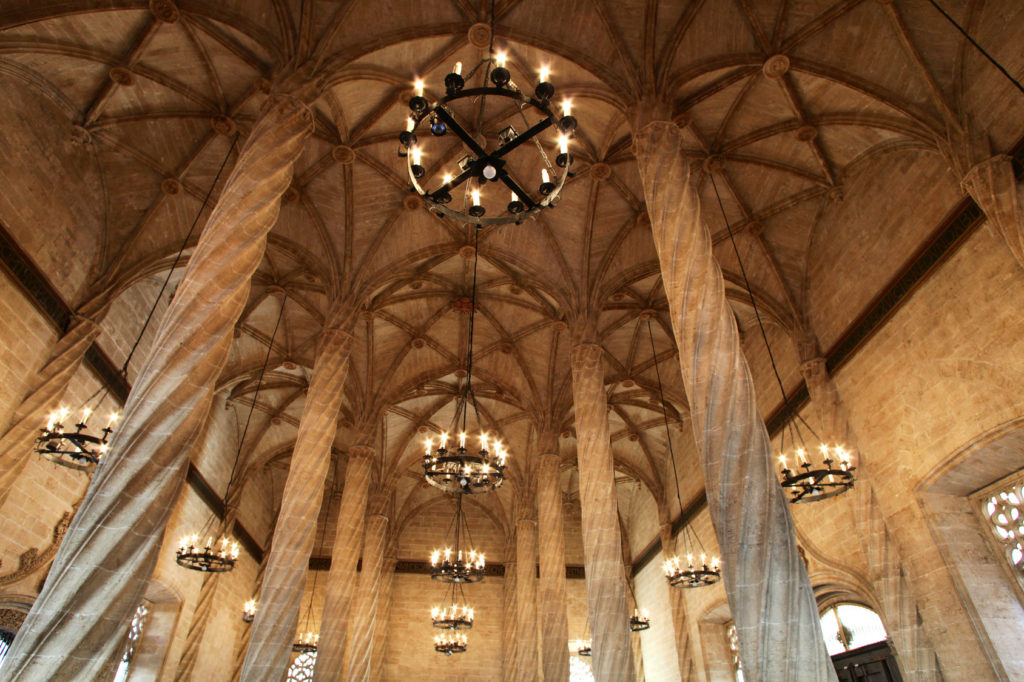 Next, make your way along the winding Carrer de la Corretgeria and Carrer de la Puríssima to La Lonja de la Seda. Translated literally as ‘the silk exchange’, this UNESCO World Heritage Site was the centre of commercial activity in Valencia during the 15th and 16th centuries. As the name suggests, silk was traded here, but a lot of other types of business were conducted as well. Today La Lonja is widely seen as one of the most beautiful and best-preserved examples of Late Gothic architecture in Europe. Especially noteworthy is the stunning Sala de Contratacion, with its soaring twisted columns and domed ceiling. The Silk Exchange is open daily and costs just €2.00 (free on Sundays).

Directly across the street from the Exchange is Mercat Central, the biggest fresh produce market in Europe. With nearly 1,000 vendors inside, the market is packed with fruits, vegetables, seafood, meat, olives, cheeses, bread, olive oil, spices, and more. You’re likely to see locals and tourists alike in the market, as most Valencians still shop for their groceries here. Stop by Central Bar inside the market for a lunch of tasty tapas before continuing on with your tour. 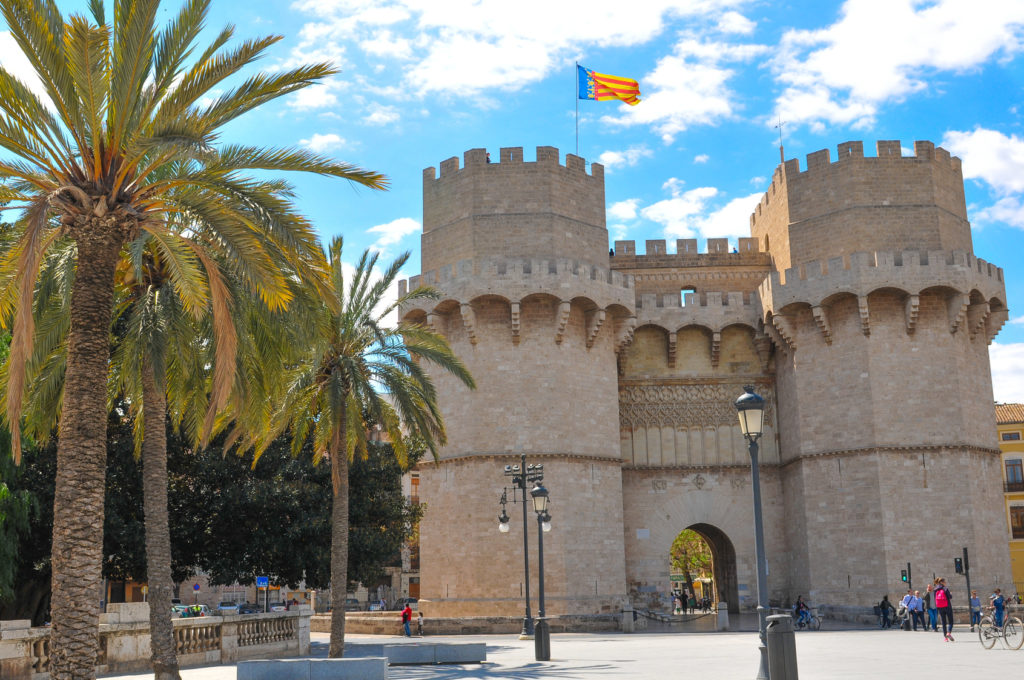 After lunch, make your way north across the old town via Carrer dels Serrans to get to the Torres de Serranos. These two 14th-century towers form one of twelve gates that were once part of the old city walls. Most of the walls were pulled down in 1865, but the Serranos Towers were spared and used as a prison for nobles until 1887. Today these impressive Gothic towers are open to the public, and you can enjoy splendid views of the city from the top for just €2.00. 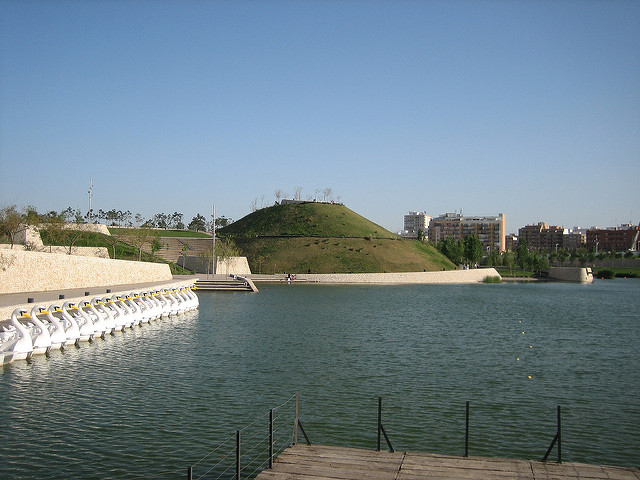 “Parque de cabecera” by Sento is licensed under CC BY-SA 2.0

Just an eight minutes’ walk across the lovely Parque de Cabecera (a sunken park built in the former riverbed of the River Turia) you’ll come to the Museu de Belles Artes de Valencia, which houses some 2,000 works by artists such as Diego Velázquez, El Greco, Gonzalo Pérez, and several native Valencians. The museum is open from 10:00am to 8:00pm Tuesday through Sunday. Admission is free. 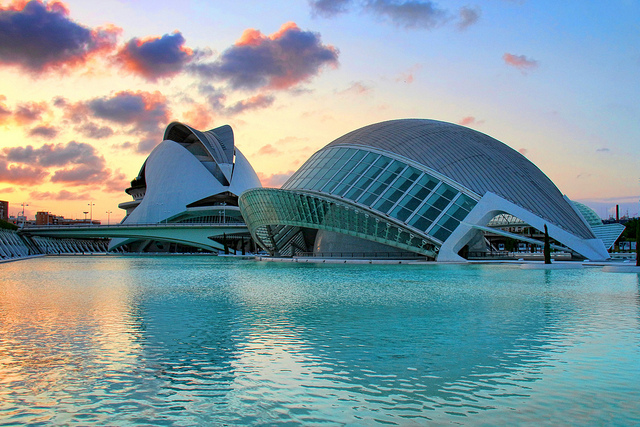 “Sunset in the City of Arts and Sciences, Valencia, Spain” by O Palsson is licensed under CC BY 2.0

For something a little different, jump back into the 21st century with a visit to the City of Arts and Sciences. This futuristic complex of buildings is like nothing you’ve ever seen, and exploring the whole thing might take the entire day. From L’Hemisfèric, a giant eye-shaped planetarium half-submerged in water, to the interactive science museum that resembles the skeleton of a whale, to the metallic curved roof of the Queen Sofia Palace of the Arts, this ‘city’ is an impressive exercise in modern art and culture. Depending on how much time you have at the end of your day, you may choose to wander the ground or dig deeper into the number of museums and structures to be found here.

Feeling peckish after a long day? Tuck into a huge plate of paella with the locals at Alqueria del Pou. Removed from the tourist crowds and thoroughly Valencian, this restaurant captures the real flavour of the region.

Transfers from the port of Valencia to Valencia take around 20 minutes.

The port of Valencia lies about six kilometres outside the city to the west. Once you’ve docked, don’t bother trying to decipher public transit schedules – instead, book your Valencia cruise port transfers to the the city and back with Shuttle Direct and have your driver waiting for you at the dock. The drive into the historical centre takes about 15 minutes, so you can get a head start on your day in Valencia without waiting for a bus or hailing a taxi.

Inspired to visit Spain? We recommend the country’s highlights.

Whether you’re arriving in Valencia by boat, plane, or train, Shuttle Direct can get you to your final destination with efficiency, professionalism, and ease. Our reliable service and wide reach has earned us our status as the top provider of transfer services across Europe and North Africa. Book with us to see for yourself!