If you’re cruising along the southern coast of Spain, there is a lot in store for you. Not only can you expect sparkling seas, craggy cliffs, and warm temperatures, you can also look forward to visiting several of Spain’s most vibrant coastal cities during your stopovers – including Seville, capital of the region of Andalusia.

It can be a bit daunting to try to tour a city as rich and diverse as Seville during just a one-day stopover. You don’t want to stick purely to the beaten track, but you also don’t want to miss the city’s iconic landmarks. That’s why we’ve composed a one-day itinerary that combines Seville’s best-known sights with a few more unusual and unexpected attractions. Follow our itinerary and you’ll never be at a loss for what to do! 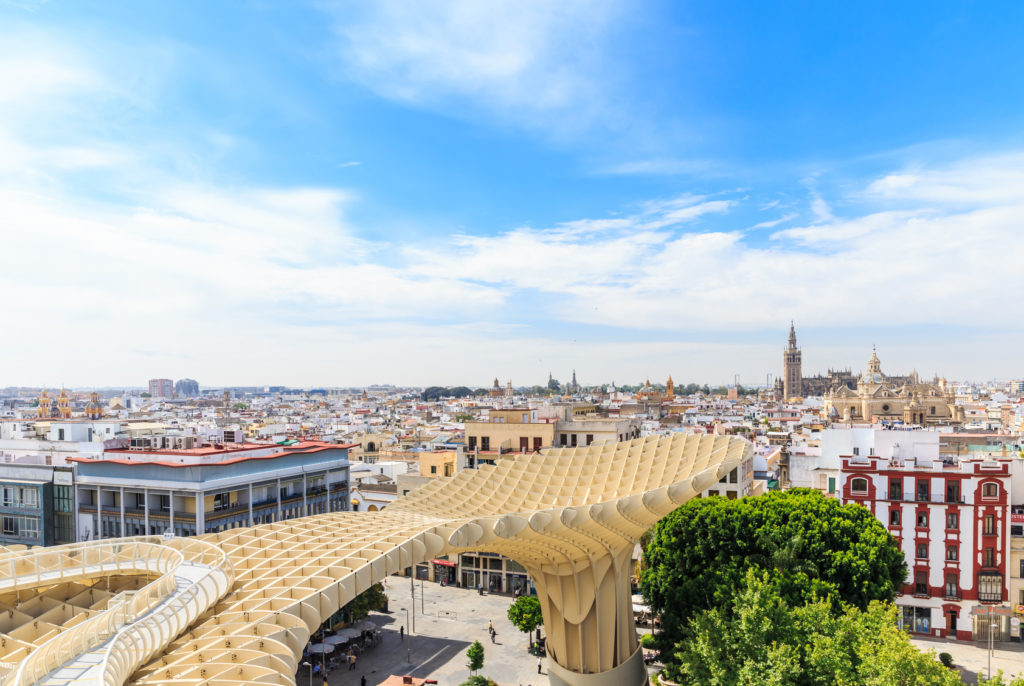 Seville is well-known for its Gothic and medieval architecture, but start your day at the thoroughly modern Metropol Parasol in the city’s old quarter. This futuristic wooden structure consists of six mushroom-shaped parasols that reach up to 85 feet high. The entire undulating structure occupies some 18,000 square metres over the Plaza de la Encarnacion, and even has a panorama terrace open to the public if you’re keen to climb up inside! 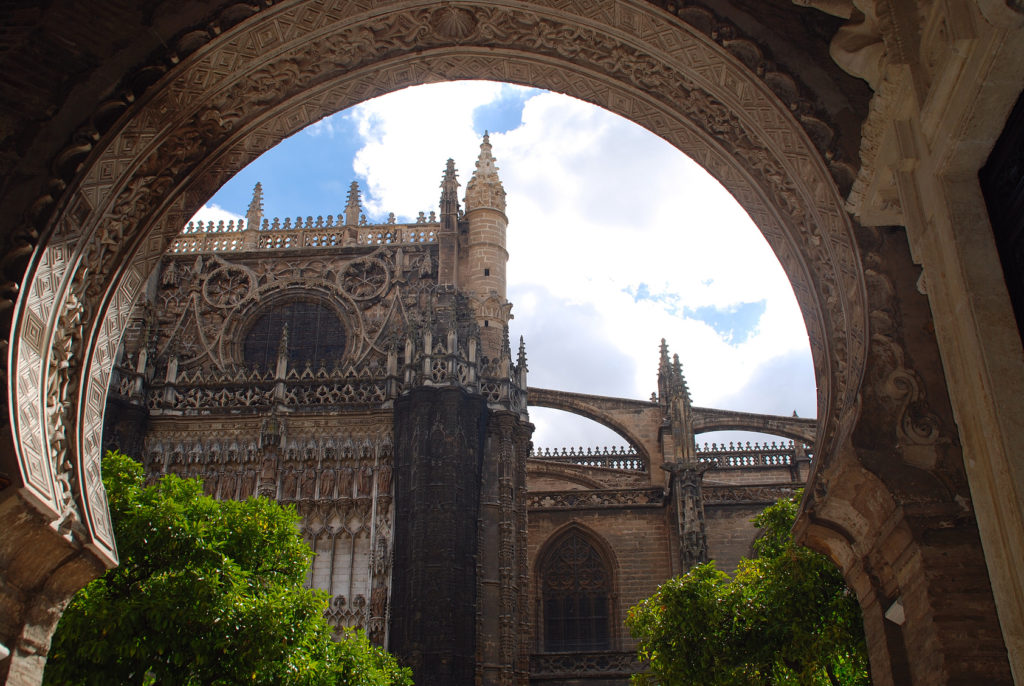 This staggering Gothic edifice, the Seville Cathedral, is the largest cathedral in the world.

Perhaps, in your travels across Europe, you think you’ve had your fill of churches and cathedrals, and that you simply can’t stand to see one more flying buttress or gilded altarpiece. Don’t make that mistake with Seville Cathedral – it’s truly superlative. Not only is this staggering Gothic edifice the largest cathedral in the world, it’s also a designated UNESCO World Heritage Site and the burial site of Christopher Columbus.

Your first glimpse of the cathedral is sure to leave you astonished. According to local tradition, when the cathedral chapter decided in 1401 to build a new place of worship to show off the city’s wealth, they stated: “Let us build a church so beautiful and so grand that those who see it finished will think we are mad”. Beautiful and grand the cathedral certainly is – a monumental celebration of Gothic architecture that you can’t miss, even if you wanted to! 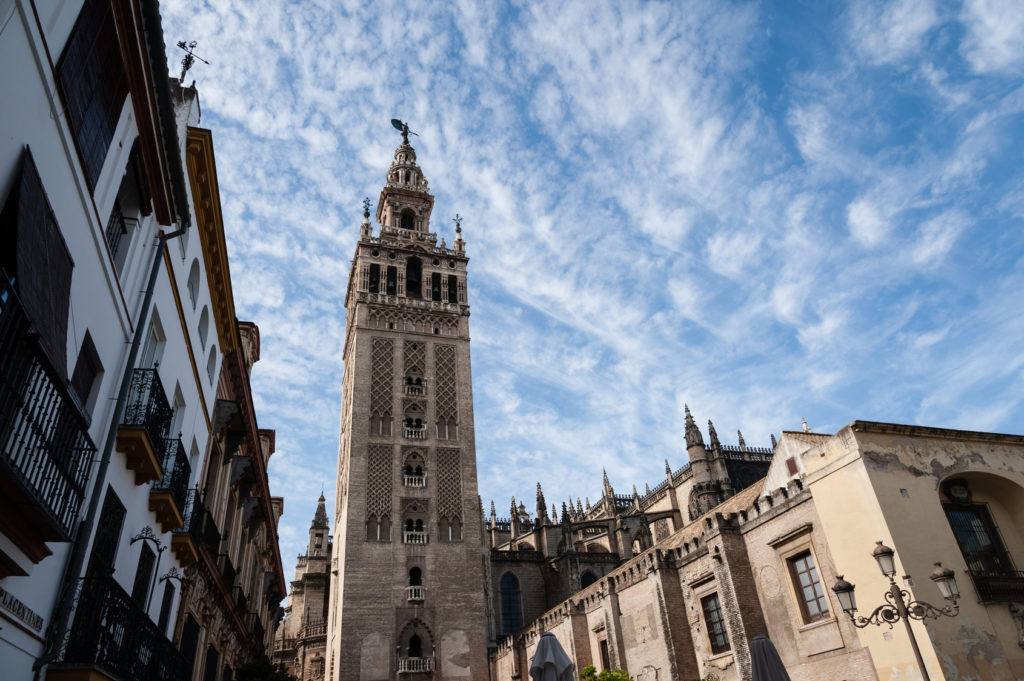 Immediately next door, La Giralda is the bell tower of the cathedral, but has a very different history. The tower, perhaps Seville’s most defining landmark, was originally built as minaret during the Moorish period in the 12th century (the adjacent cathedral was on the site of a mosque). The Spanish later adapted the minaret with a Renaissance-style top, now the upper third of the tower. Today, you can climb to the bell chamber for a remarkable view of the whole city. Admission to the Giralda is included with the price of admission to the cathedral.

Looking for a light bite to fuel the afternoon ahead? Nip into Gusto Ristobar, just around the corner on Calles Alemanes. This vegan Spanish fusion spot will satisfy your hunger pangs without weighing you down. 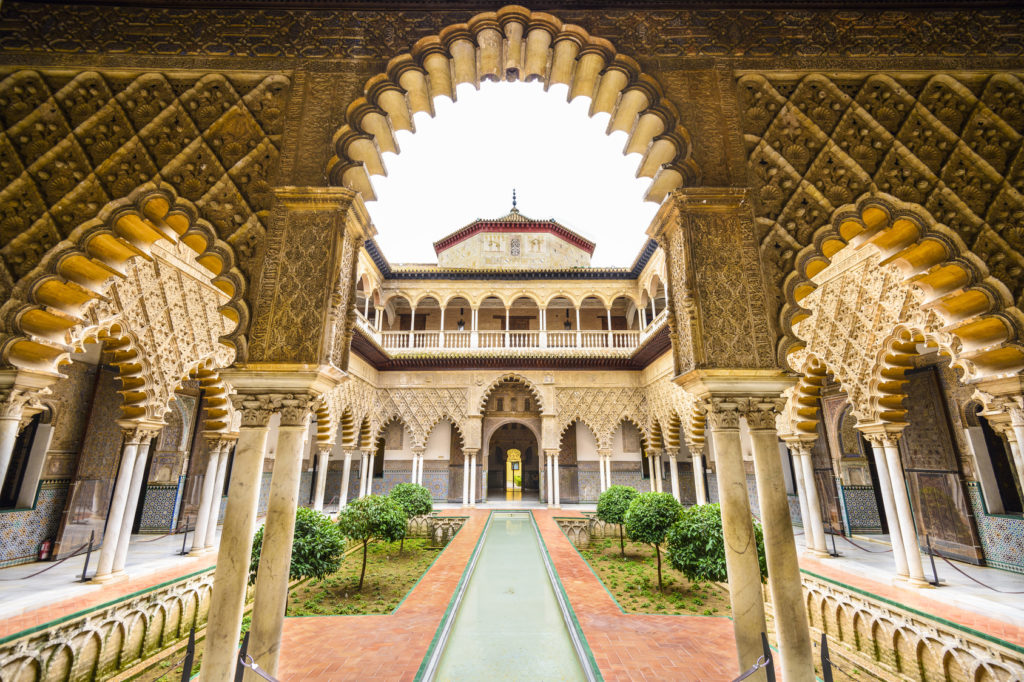 The Alcázar: yet another architectural triumph.

Just 250 metres from the cathedral is yet another architectural triumph (if you haven’t noticed yet, Seville is full of them!). The Alcázar has been an integral part of Seville for over eleven centuries – first as a fort, then a palace for the Moorish Muslim kings, and today the residence of the royal family (though much of it is still open to visitors). It is here where you’ll find some of the finest examples of mudéjar, the architectural style that sprang from the collision of Moorish and Iberian cultures. From the intricate tile work to the sunken gardens, from the graceful arches to the exquisite carvings, the Alcázar will have you marvelling at every inch of it! 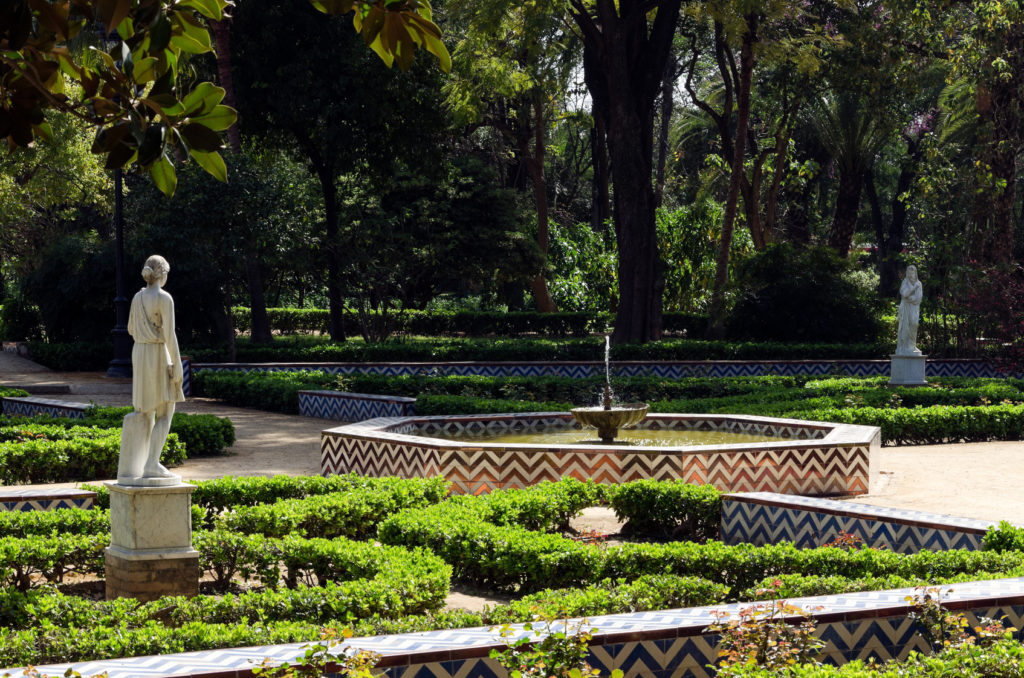 Seville’s Maria Luisa park is a lush oasis perfect for getting some quiet time.

Right in the middle of the city, this 100-acre public park is a lush oasis perfect for escaping the blazing Spanish sun. Seville’s principal green area is criss-crossed by winding paths lined with pine, orange, and palm trees which provide welcome shade. As you wander through the park, you’re sure to happen upon beautifully tiled fountains and benches that invite you to sit back and watch the world go by.

Entrance to the park is free. 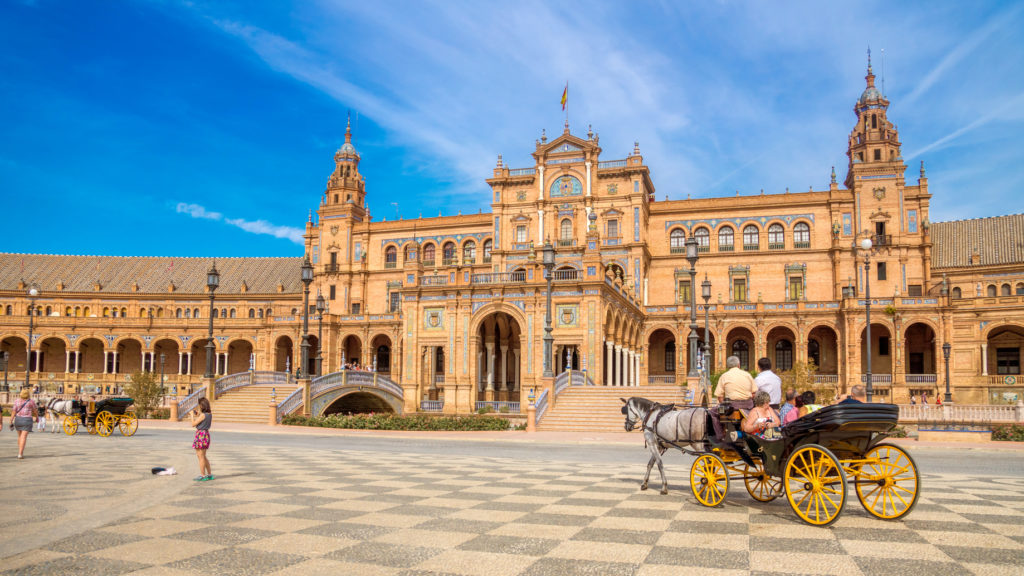 On Plaza de España, you can find colourful mosaics representing each of Spain’s main cities.

Dominating the northern edge of Maria Luisa Park is the Plaza de España, a sprawling set of Renaissance/Moorish Revival-style buildings set in a horseshoe around a vast plaza. Originally built to host the Ibero-American Exposition of 1929, the buildings in the plaza are today used mostly for governmental purposes. If you’re an art or architecture buff, you’ll find plenty to interest you here. From the intricately tiled alcoves to the magnificent moat, the plaza is truly a feast for the eyes.

Feeling peckish after a long day? Head over to Cristina and Co (just a ten minutes’ walk from the Plaza) and enjoy a glass of sangria with house specialties like oxtail burgers, tuna tartare, and tomato pasta. 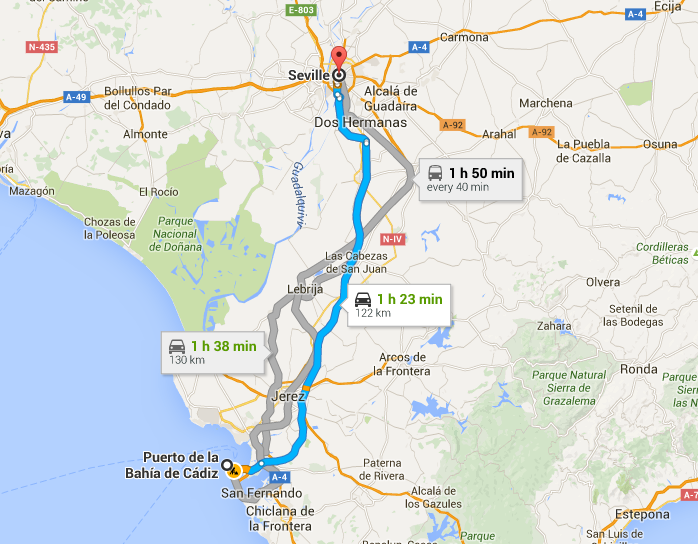 Most cruise ships stopping over in Seville will dock at Cádiz, about 75 miles south on the coast (some smaller cruise ships can go up the Guadalquivir River into the city centre). The drive into Seville from the port of Cádiz takes just over an hour, so you’ll want to make your transportation arrangements well ahead of time to avoid wasting a single minute of your stopover. Book your cruise port transfers to Seville with Shuttle Direct to get fast service to Seville and back after a full day of sightseeing.

Whether you’re staying for 24 hours or the whole summer, Shuttle Direct can help you get there. As the number one provider of transfer services across Europe and North Africa, we know a thing or two about getting travellers where they need to go. Book your next transfer with Shuttle Direct and let the journey begin!