Located some 150km north-west of Split on the coast of Croatia, Zadar is proving a welcome surprise to many cruise ship passengers who have little prior knowledge of this historic destination. Although the city was founded as far back as the year 4BC it gained prominence as an important Roman settlement from the year 59BC when it was developed into a typical Roman city, the remains of which can still be seen today. After the fall of the Western Roman Empire the city was ruled by many civilisations and nations including the Franks, Byzantines, Venetians, Austrians and Italians.

During the Second World War the city suffered severe damage from Allied attacks destroying many notable buildings constructed over many centuries. In the early 1990s during the Croatian War of Independence Zadar was shelled by Serbian rebels intent on taking control of northern Dalmatia. As a result a number of the city’s historic buildings including UNESCO protected sites were damaged.

Today visitors can get a feel for the fascinating history of Zadar by wandering around its Old Town where thousands of students from the city’s ancient university help create a vibrant atmosphere. Away from the historic centre the number one attraction is the Sea Organ which is located right next to where your ship will most likely dock. This is a series of tubes in the sea which have been aligned in such a way that they serve as a musical instrument by creating music from sea waves.

The location of the port in Zadar is ideal for cruise passengers as it’s right on the edge of the Old Town next to the famous Sea Organ which you may well be able to hear as you disembark. On arrival you can just cross the road and wander into the compact historic centre of this walled city. As the volume of cruise ships visiting Zadar has increased a few larger vessels have been known to dock at Gaženica which is 5km south of the main town.

Insider Tip: You can get Kuna, the Croatian currency, from ATM machines in the Old Town as Euros are not widely accepted. Make sure to withdraw sufficient funds to cover visits to other Croatian ports such as Split and Dubrovnik if you’re heading that way. 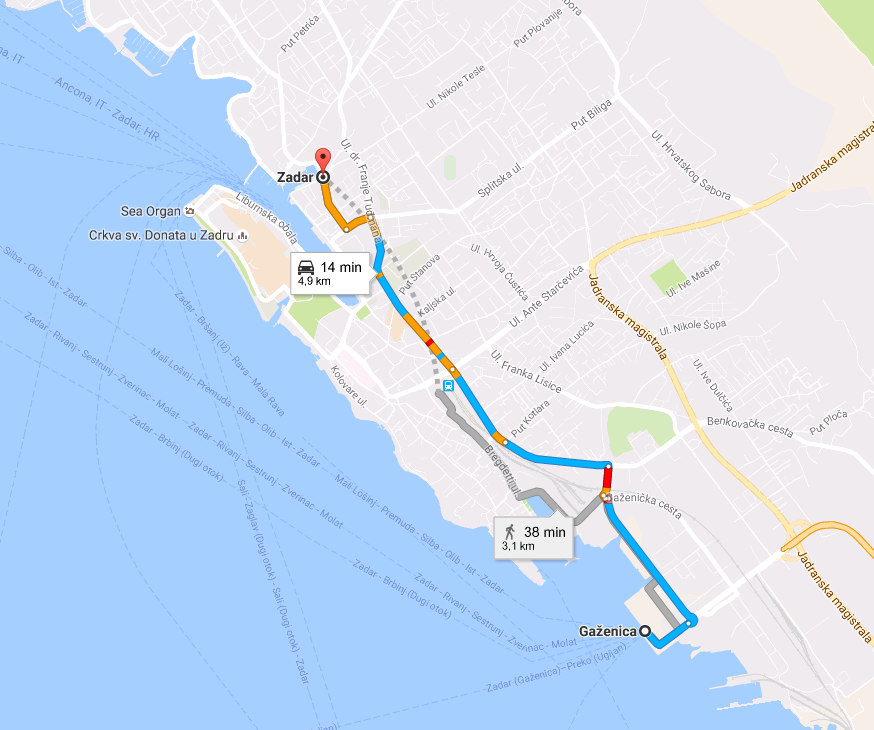 If you happen to be joining your ship in Zadar or ending your cruise here you’ll most likely be passing through the city’s airport which lies just 12km east of the Old Town. There’s an airport bus which connects the arrivals terminal with the main bus terminal and the old town in about 20 minutes. Plenty taxis are also available at the airport.

The most convenient form of transport for getting to your ship or to hotels in the Old Town is to pre-book private transport with a specialist transfer company such as Shuttledirect who will have a vehicle and driver awaiting your arrival.

Getting Around in Zadar

You couldn’t really ask for a more relaxing and straightforward stop on your Adriatic cruise than Zadar thanks to its small size and the immediate proximity of all the places of interest within a short stroll of your ship. For a self-guided walk you can pick up a city map at the main tourist information office (Mihe Klaica 5). Alternatively, you can join an official walking tour departing from Narodni trg (People’s Square) at 10am, 12am or 6pm, just look out for tour guides carrying a white umbrella and get your ticket from them.

Sea Organ: The large-scale reconstruction of Zadar which was carried out after the Second World War produced a characterless concrete wall along the seafront. Redevelopment of this area resulted in the opening of the Sea Organ in 2005 attracting many tourists keen to hear the musical sounds which are created by wind and waves. 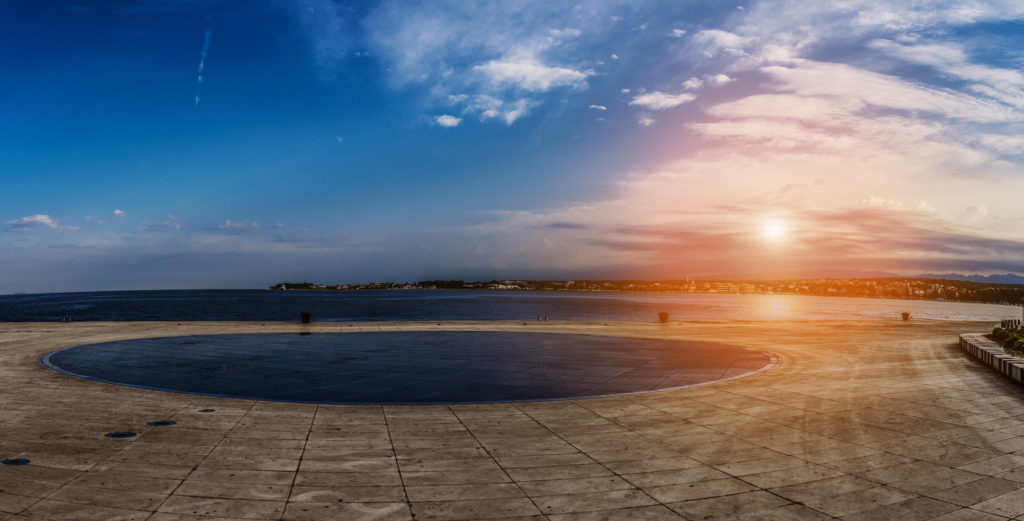 Monument to the Sun: Located next to the Sea Organ this monument is a series of glass plates which produce a light show at night.

Church of St. Donatus: Probably the most iconic building in Zadar this 9th century church overlooks the Roman Forum. Outside the church is a landmark known as the ‘Pillar of Shame’ which is a stone column to which people found guilty of wrongdoing were chained during the Middle Ages as a form of humiliation. You should make a point of taking a coffee break at Caffe Bar Forum which lies right next to St. Donatus’s.

Roman Forum: In the heart of the Old Town the origins of this ancient forum can be traced back to the 1st century BC. Dominated by St. Donatus’s it’s no longer in great shape having undergone major reconstruction after World War Two but is well worth a visit. Something which is surprising at the Forum is that visitors aren’t prevented from touching or even sitting on the ancient ruins.

Thanks to the large number of students in town there are plenty cheap places to grab a light lunch. Look out for local places called ‘Konobas’ which are establishments where fishermen traditionally congregated and had cooks prepare some of their catch for them.

Cathedral Bell Tower: On your travels around Europe you’ll discover many religious buildings which are more impressive than Saint Anastasia’s Cathedral. However, this 12th century structure is well worth a visit just to climb the steps up the bell tower from where you get great views across the city and of the harbour. 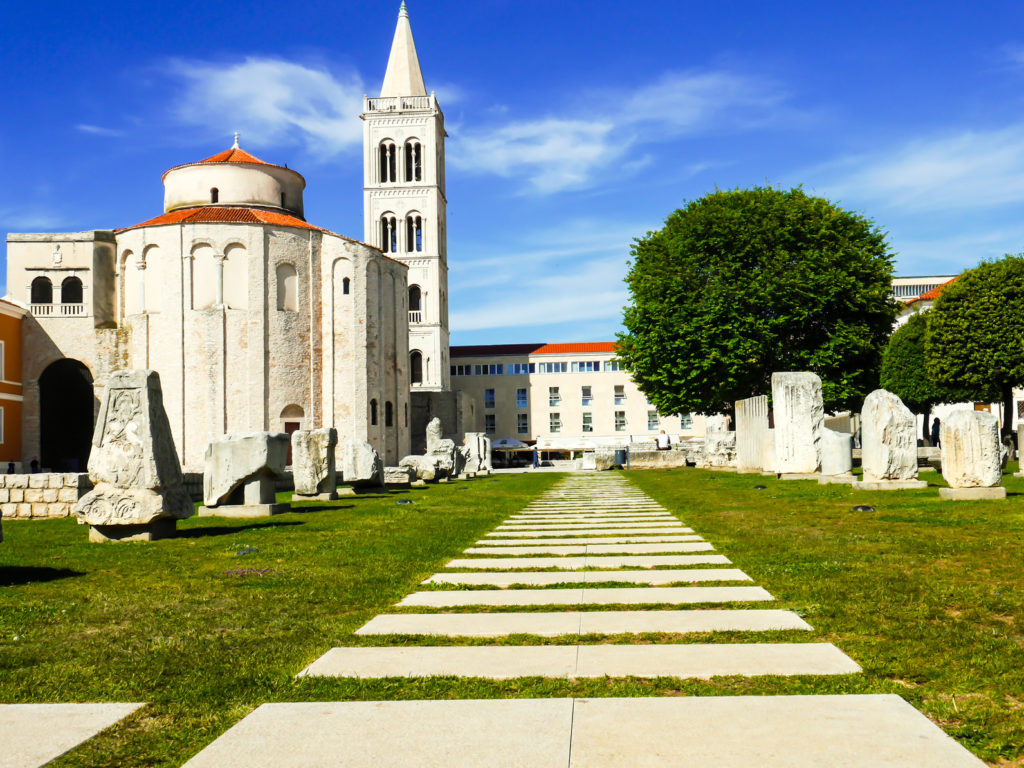 One Night in Zadar

In 1964 the famous film director Alfred Hitchcock visited Zadar describing its sunset as “the most beautiful in the world, more beautiful than the one in Key West, in Florida, applauded at every evening.” If you’re spending the night in the city there’s nothing better than listening to the sound of the Sea Organ and taking a stroll along the promenade as the glorious sun sets in the distance.

After sunset head for one of Zadar’s fine terrace restaurants where you can enjoy your evening meal al fresco. Highly recommended is Restaurant Bruschetta (Ulica Mihovila Pavlinovica 12) where you can enjoy some excellent seafood dishes in close proximity to the promenade. Alternatively you could head back into the Old Town where you’ll find a good range of Croatian eateries as well as numerous Italian restaurants such as Mamma Mia (Put Dikla 54) which is highly regarded.