The beautiful city of Seville has long been associated with artistic prestige and a heady mix of cultural influences. After emerging under Roman rule, Seville was ruled for centuries by a succession of Muslim dynasties, which saw its rise as a cultural and commercial centre. Several hundred years after its capture by the Christian king Ferdinand III in 1248, the discovery of the New World helped Seville became one of the great cities of early modern Europe.

Its economic fortunes dwindled with the unravelling of Spain’s empire in the nineteenth century, but culturally Seville continued to flourish, with the seventeenth-century painter Diego Velázquez among many artistic figures calling the city home. Industrialisation and the growth of its port in the twentieth century lifted the city’s economy, and it is now one of Spain’s loveliest cities, as you can see from this pick of its historical attractions.

The city’s Gothic cathedral is a riveting compendium of Seville’s historical guises. Completed in 1506 at a time when the city was reaping the benefits of being the gateway to Spanish exploration of the New World, the cathedral replaced a mosque built by the former overlords of Seville, the Almohads. As with the rest of the city, however, reminders of the site’s Islamic past are readily evident: before entering the cathedral visitors first walk through a forecourt in which an octagonal fountain stands, used by devotees to wash themselves before entering the mosque.

Within, various chapels branch off the 117m-long nave to render what many consider to be the country’s most staggering Gothic interior. UNESCO certainly believe so, as the cathedral, still Europe’s third-largest, is a World Heritage Site. 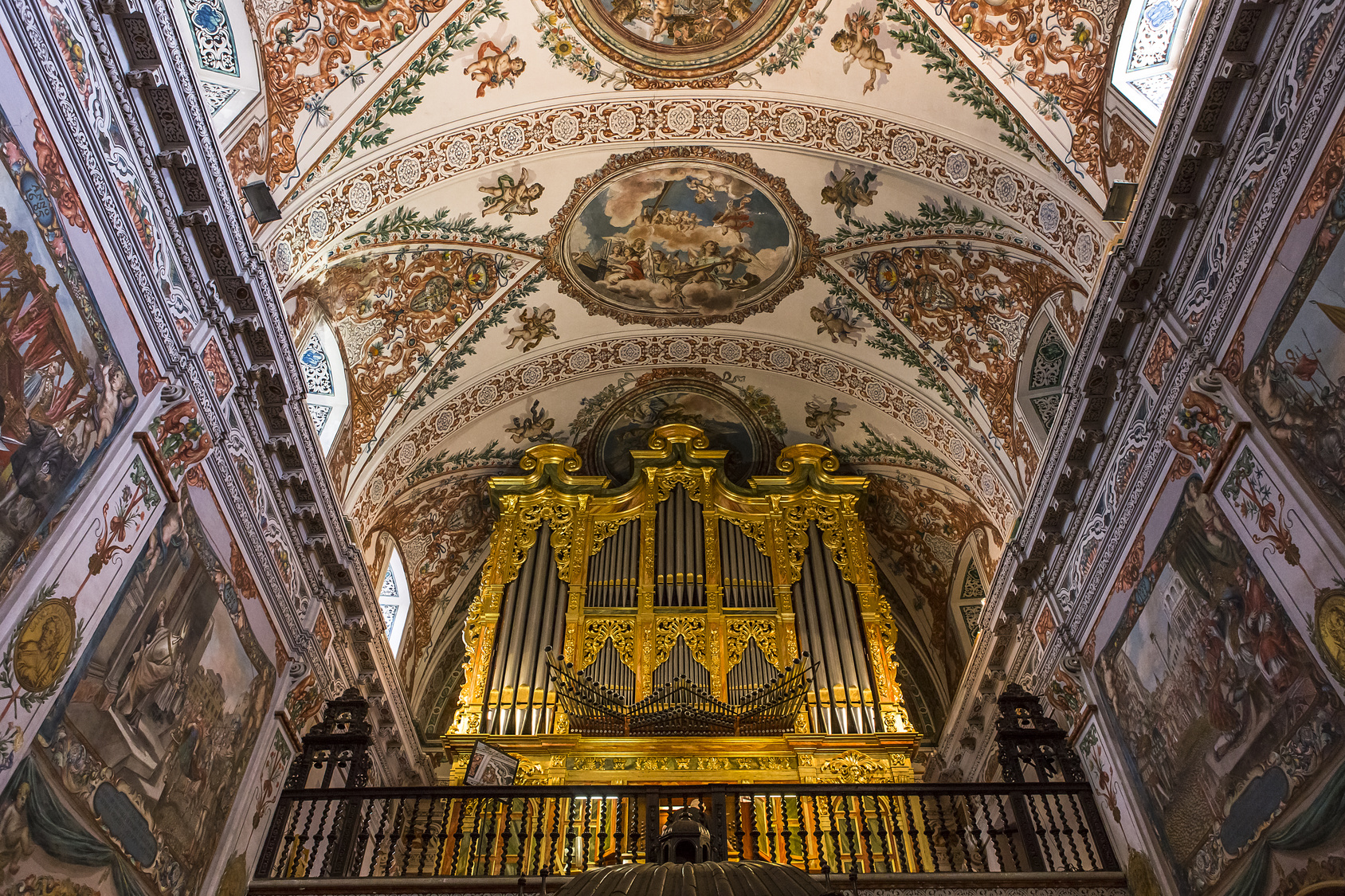 This gorgeous palace complex, also a World Heritage Site, has served as the domain of both Muslim and Christian rulers and continues to be used by the royal family on state occasions. In the 1360s the Christian king Pedro the Cruel commissioned Muslim craftsmen to renovate the palace in the Mudéjar style. The courtyard, with its distinctly Islamic arches, epitomises this transcending of religious identities. The beautiful gardens are interspersed with orange trees, palms as well as beautiful pools and fountains, a gesture to the warm Andalusian climate. 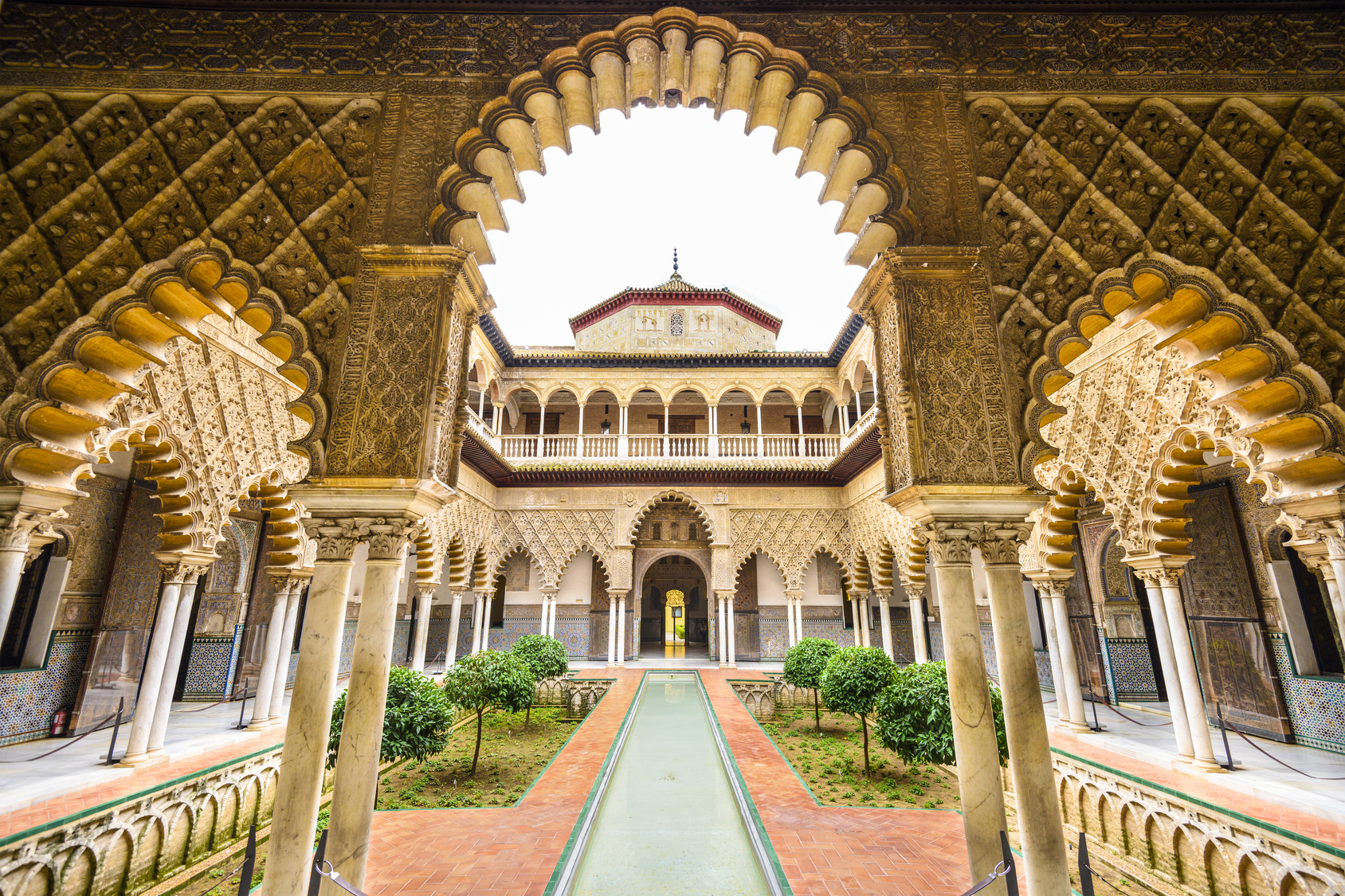 This nobleman’s house was built in the sixteenth century by Muslim and Christian craftsmen under the direction of the Genoese architect Antonio Maria Aprile. Consequently, the house is a brilliant fusion of Mudéjar, Gothic and Renaissance influences. In the courtyard, striking azulejos (ceramic tiles) beautifully complement the cool marble fountain and classical sculptures. Take time to view the Salón Dorado (Golden Room) and its coffered wood ceiling, as well as the collection of bullfight paintings by Goya.

*Top Tip: Remember to pace yourself while sightseeing. Why not take a break and stop for some tapas? Check out some of our favourite tapas bars here. 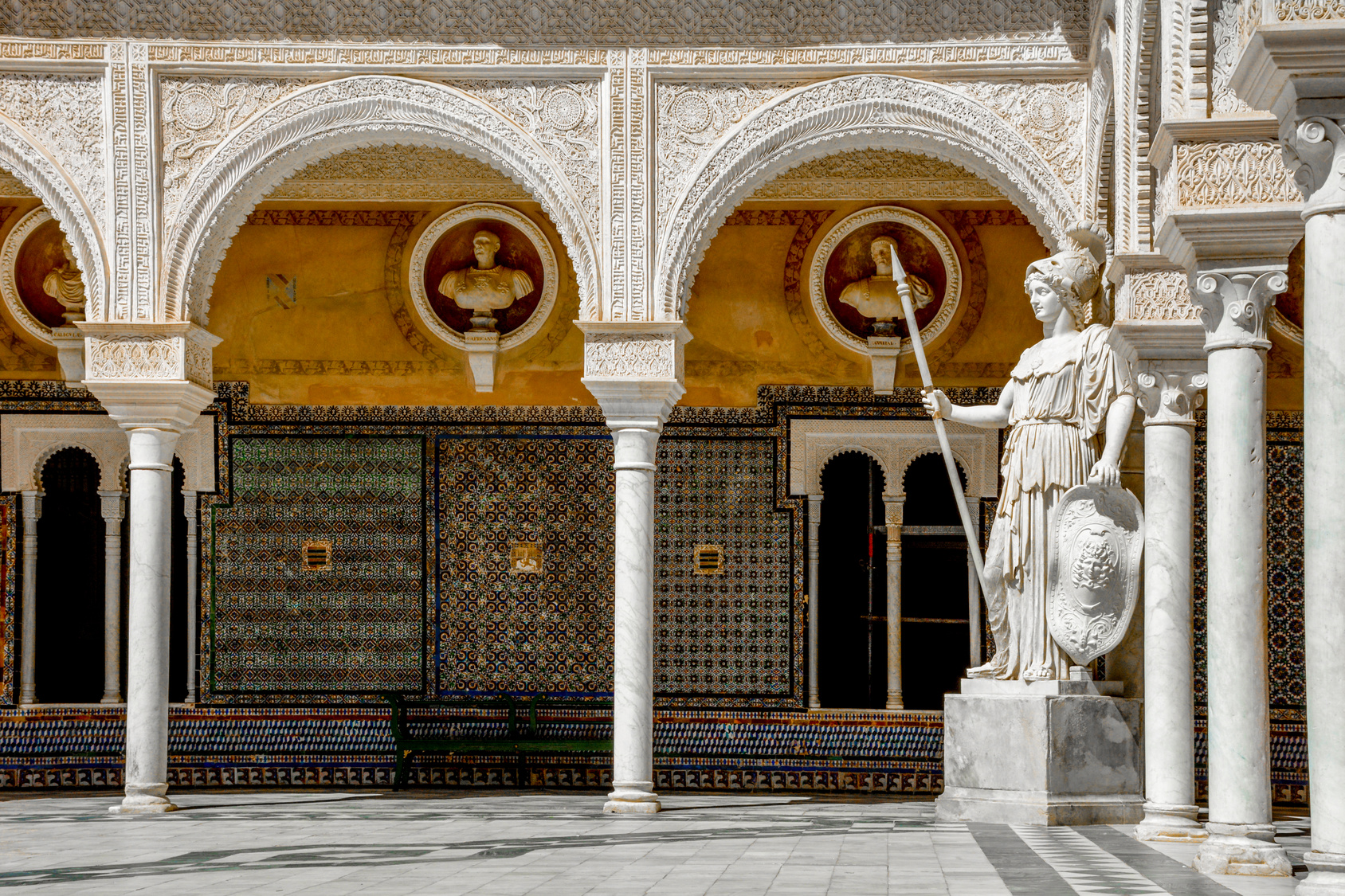 To best appreciate the fascinating and varied history of Seville, visit the Archaeological Museum. Before hurling headlong back into the past though, the building in which the museum is housed – a Neo-Renaissance structure created for the Latin American Expo in 1929 – is itself worthy of admiration. The museum’s scope begins in the Palaeolithic era, before taking in the region’s Phoenician, Greek and Roman chapters and culminating in the time of Al-Andalus, when the Muslim Almohads ruled. The finds from the nearby Itálica archaeological site – a now ruined Roman town where the emperors Trajan and Hadrian were born – are also well represented. 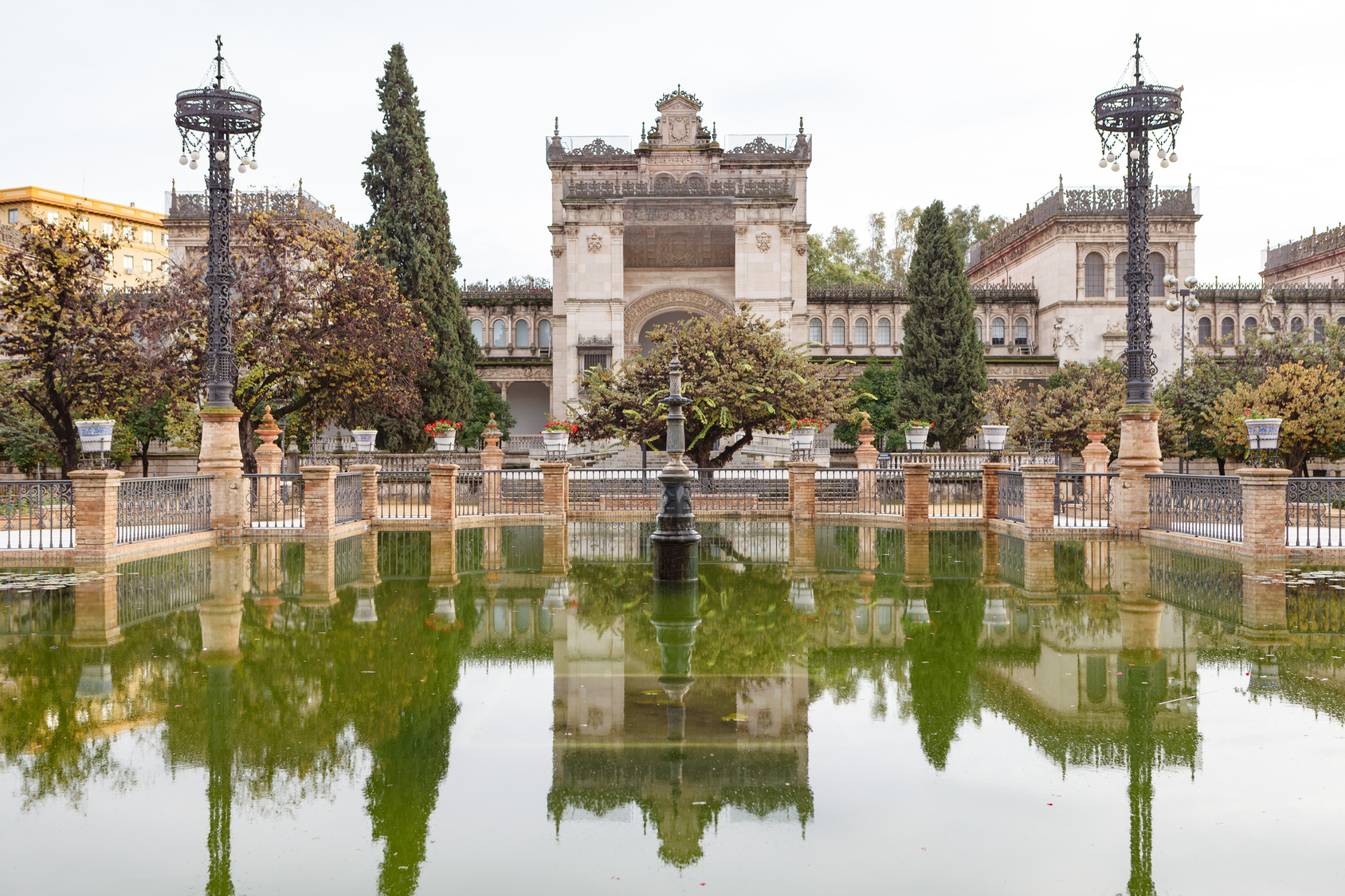 Seville’s civic pride is reflected in the majesty of its ayuntamiento (town hall). First built in the fifteenth century, the exterior features reliefs of heraldic symbols and historical figures connected by a mixture of fact and legend to Seville, including Hercules and Julius Caesar. Its façade was given a Neo-Classical overhaul in the nineteenth century. You don’t have to settle for rubbernecking though; it is possible to explore the interior on a pre-booked appointment, which includes a painting of the patron saints of Seville, Justa and Rufina, who were martyred there in the third century. 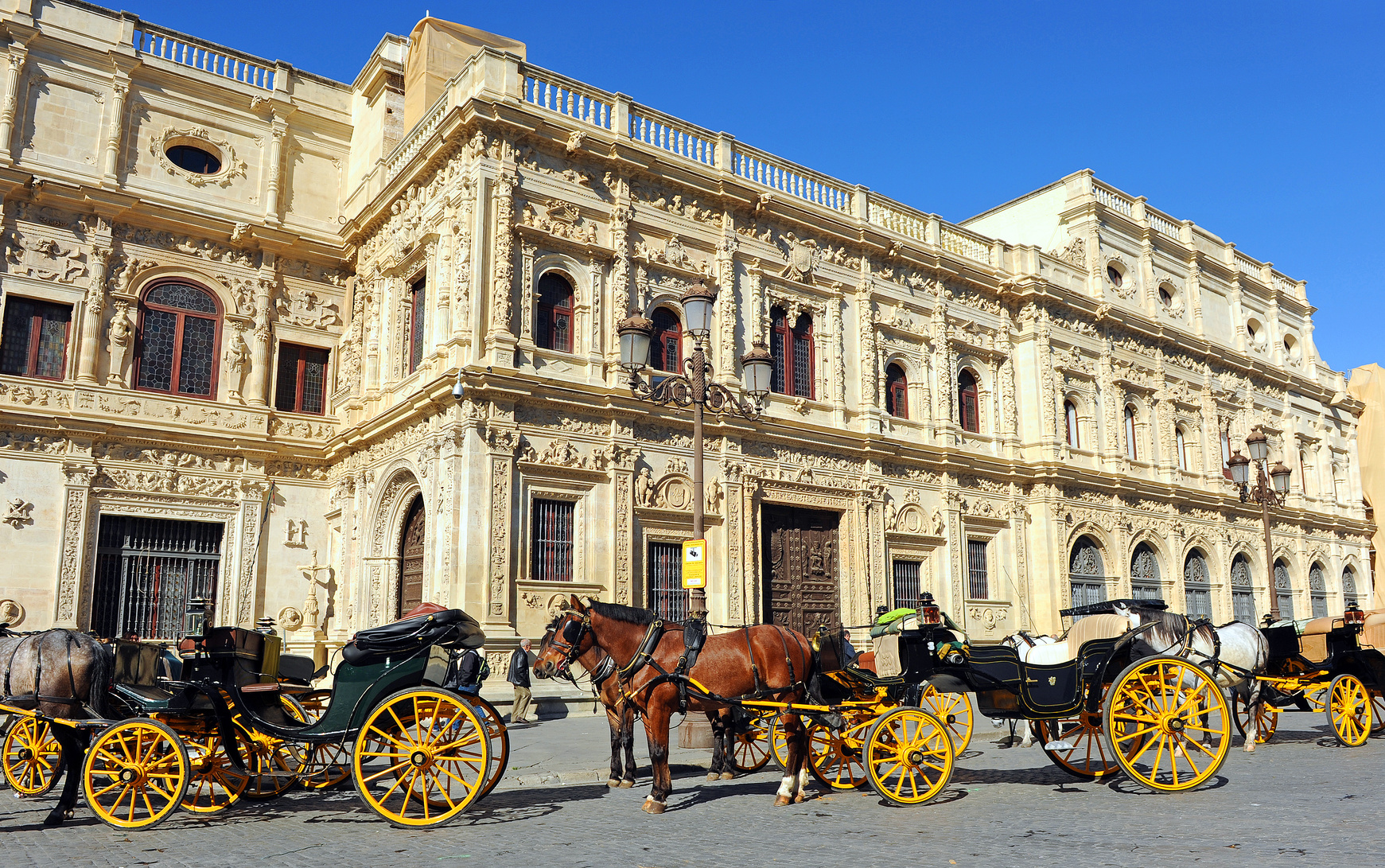 Direct flights from London to Seville are numerous and affordable. Ryanair, Iberia, easyJet and British Airways are all recommended. Once you arrive, Seville’s treasures will beckon all the more, so don’t hesitate to pre-arrange your Seville airport transfer with Shuttle Direct. With your convenience always in mind, a direct private transfer from the airport to your accommodation with Shuttle Direct will guarantee the comfortable and relaxing start to your holiday that no public transport system could.

Hotel Fernando III – Ensconced within the historic Santa Cruz district, this four-star hotel has lovely rooms, some of which have balconies. The in-house restaurant specialises in Andalusian cuisine, and also serves tapas for those in need of a lighter bite. A rooftop pool is available to unwind in.

Hotel Sevilla Macarena – Modernity mixes with the ancient at this four-star establishment; the old city walls are directly opposite. The centrepiece of Hotel Sevilla Macarena is its patio that is typical of the city style – the excellent restaurant can be found here. It is possible to book guided city tours at the hotel reception too.

Hotel Sevilla Center – Unfussy yet elegant rooms, a Mediterranean restaurant with panoramic views of the city and a superb location make the four-star Hotel Sevilla Center a sound choice. The cathedral is a mere 15 minutes’ walk away, the Real Alcázar just over a kilometre. The inviting rooftop terrace is the cherry on top.

Shuttle Direct is the leading provider of airport transfer services in Europe and North Africa. For years travellers have entrusted Shuttle Direct to handle their transport needs, and our excellent range of low-cost and efficient services provide holidaymakers with a stress-free start to their vacation. Book your transfer through our easy to use online booking system and let us do the rest while you look forward to discovering the delights of Seville.