Disappointed by the characteristically chilly temperatures of the northern European summer? You’re not alone. But while you – arguably – can’t change the weather gods’ wishes, you have a choice: you can either sit around the house and mope, or you can leave the near-arctic temperatures behind by jetting off to a warm and sunny destination.

If you’re like me, you’ll find that the latter option sounds significantly more appealing. But how do you avoid the crowds of eager holiday goers who inevitably had the same idea as you? Let me tell you about Lindos, a scenic and off-the-beaten-path spot on the Greek island of Rhodes. With this guide, you’ll be able to see the best of this peaceful village, focussing on its cultural, natural and gastronomic delights. Read on for the leisurely holiday of a lifetime.

Want to venture outside of Lindos and take a day trip to the nearby city of Rhodes? Great choice. Check out our detailed guide here.

Upon arrival, why not embrace your inner explorer and get the lay of the land? Lindos is a tranquil village – but that certainly doesn’t mean that you’ll be at a loss for things to do. Although Lindos’ narrow alleyways give it a quaint, small-town feel, you’ll encounter plenty of imposing architectural wonders that offer a charming contrast. From whitewashed houses and mansions to marvellous mosaics and churches, you’re sure to behold stunning sights during your stroll, so bring your cameras and snap away.

As you know, you don’t just come and see – you also buy (sorry, Caesar, I had to alter that statement a bit). In the case of Lindos, these words of wisdom are wholly applicable: upon spotting its shops, you’ll certainly want to take their handmade arts and crafts home with you. Whether jewellery, interior decorations or colourful tiles tickle your fancy, you’ll be able to find plenty of unique souvenirs that you’ll cherish forever. So why not let your new credit card loose and treat yourself to something special?

Keep Calm and Coffee On

When on holiday, it’s important to go at a leisurely pace – after all, you’re meant to be relaxing! Fortunately, Lindos has many tranquil venues that are perfect for kicking back in style. To break up your sightseeing and shopping trip, I recommend stopping off at a coffee shop and savouring some authentically Greek coffee (read: strong and flavourful). There’s a wealth of top-notch shops, but here are a two of my favourites.

Geo Blu – This venue, which is situated in the village centre, is loved by children and adults alike. In addition to spoiling its customers with tasty coffees, milkshakes, sandwiches, and homemade cakes, all of which are made onsite, Geo Blu is known for its delicious ice cream. What’s more, the cafe boasts a variety of great seating areas, ranging from a tranquil courtyard to a breathtakingly beautiful rooftop terrace.

Village Cafe – Conveniently located on your way to the beach, this cosy place is a hotspot for both locals and tourists. Along with serving some of the finest coffee (and smoothies) you’ll ever taste, you’re bound to get a bit peckish when you spot the shop’s scrumptious selection of Greek delicacies, including salads, sandwiches and wraps. And, it gets better: there’s an elegant courtyard and a charming inside seating area, both of which are ideal for cooling down and escaping the hot summer sun.

It’d be a real shame to travel to Lindos and miss its main – and most exciting – attraction: the Acropolis. This archaeological site showcases Lindos’ ancient origins, which date back to the tenth century BC. Over the course of two hundred years, the town rose to prominence as a trading hotspot, but was soon overshadowed by the nearby metropolis of Rhodes, which rose to power a few centuries later.

Despite its short claim to fame, there’s much to see and discover in the ancient town of Lindos. In the Acropolis, you’ll find a stunning fourth-century temple, built by the Dorians. What’s more, there’s a Roman temple, which was erected in the honour of Emperor Diocletian; glamorous gateways; a theatre; and more. You won’t just be amazed by the wealth of artefacts that remain, but also be stunned by how well-preserved they are. Ready, set, explore!

*Insider Tip: The Acropolis is situated on a hill, which is rather steep. If you’re not feeling up to the 20-minute walk, which is somewhat challenging on hot days, I recommend opting for a donkey ride, which can be booked with ease at the bottom of the hill. 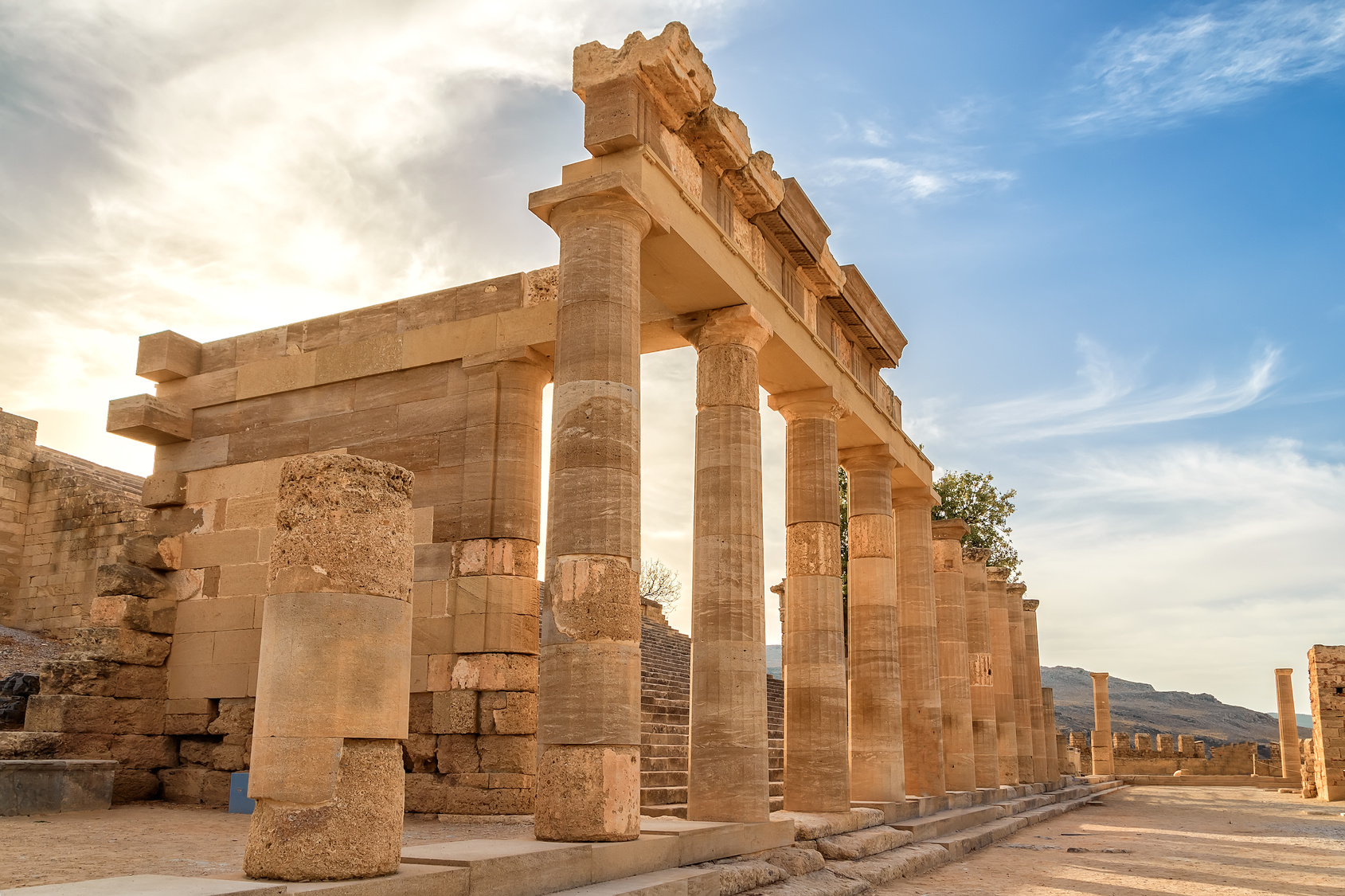 While visiting the Acropolis should be your first priority, unwinding on Lindos’ beaches is a close second. In fact, there are two fantastic beaches right on your doorstep: the Main Beach and St. Paul’s Bay.

Lindos Main Beach – When you’re looking to get your tan on and go for a dip in the balmy ocean, the Main Beach is the perfect spot. This oasis of repose is only a short walk away from the village centre, and – for additional convenience – has myriad sun umbrellas and beds, as well as a popular beach bar. Golden sand and turquoise waters, here you come.

St. Paul’s Bay – This bay (actually, there are two bays here!) is situated right below the Acropolis; perhaps you spotted it during your outing. If Lindos Main Beach gets a bit too busy for you, simply escape to St. Paul’s Bay, which is more secluded and is a mere 15-minute walk from the village. Life truly doesn’t get better than when  you’re reading a book on a sunbed and enjoying some much-needed peace and quiet! 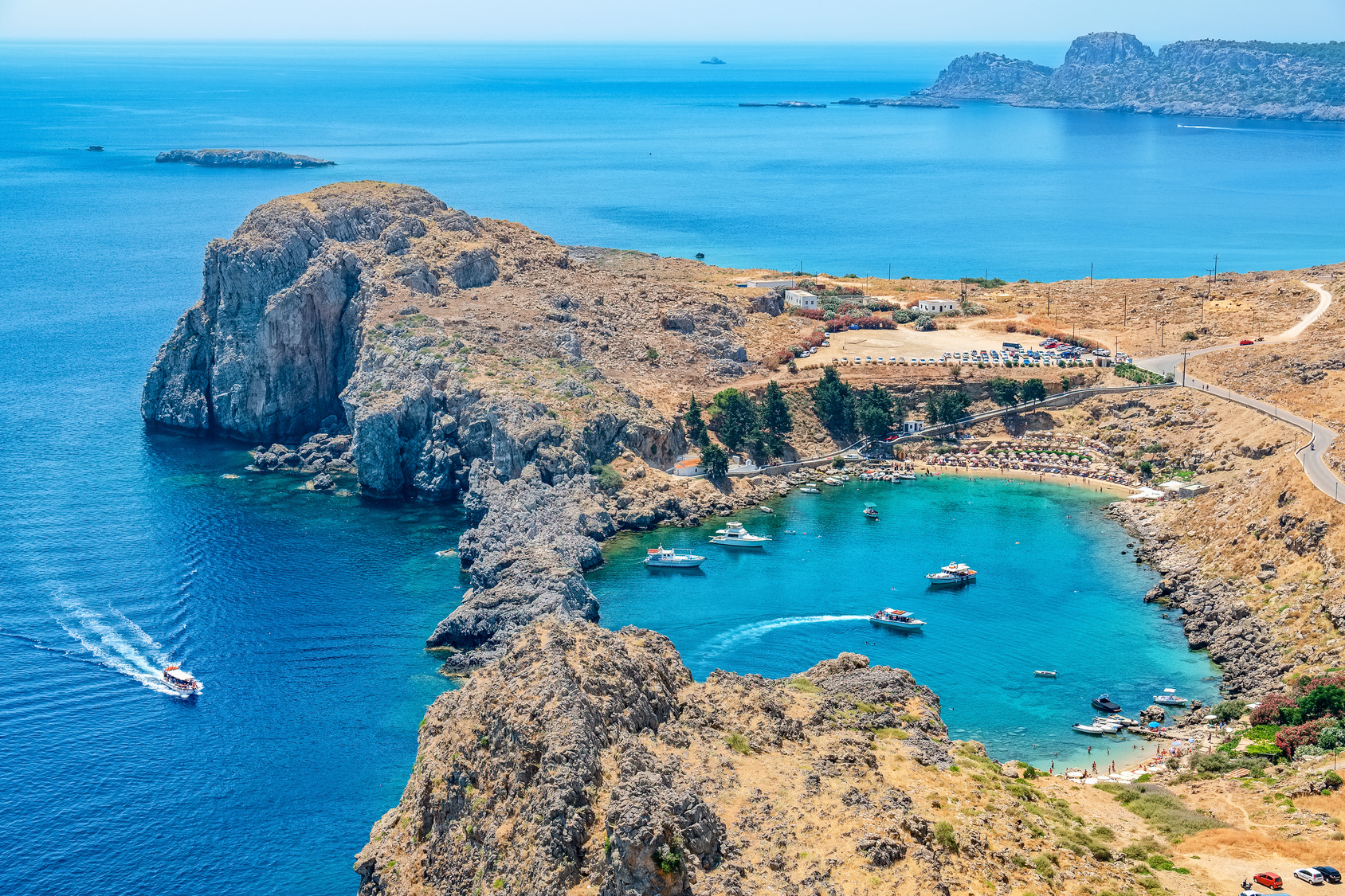 After a laid-back day of sun and fun, there’s nothing better than sitting down to a delicious meal. And believe me: wining and dining in style is the norm in Lindos. Thanks to its amazing selection of restaurants, you might find yourself unable to choose the perfect place. Let me help you out by recommending my favourites.

Agostinos – Since 1983, this fantastic rooftop restaurant has charmed visitors with its Greek delicacies and its breathtaking views of the village. This special spot is particularly popular among couples, who love witnessing spectacular sunsets over a glass of champagne and a mouth-watering meal.

Dolphins – This restaurant is somewhat of a legend among locals, celebrating its 40th birthday in 2017. Situated right next to Lindos Main Beach, it boasts an incredible setting and view. But that’s not even its main selling point: its menu features a variety of Greek dishes and – most notably – fresh seafood, which are best savoured with a glass of local wine or a few ouzos in hand.

Oasis Taverna  – This tavern is an all-time favourite among locals. In addition to offering marvellous views of the bay on its terrace, the restaurant is famous for its friendly co-owners, the brothers Rockos and Yiannis. This duo has created a menu that features a variety of their family’s exclusive recipes, which prepare conventional Greek specialties with a tasty twist. From salads to fish to meat, there’s nothing that Rockos and Yiannis don’t make well. 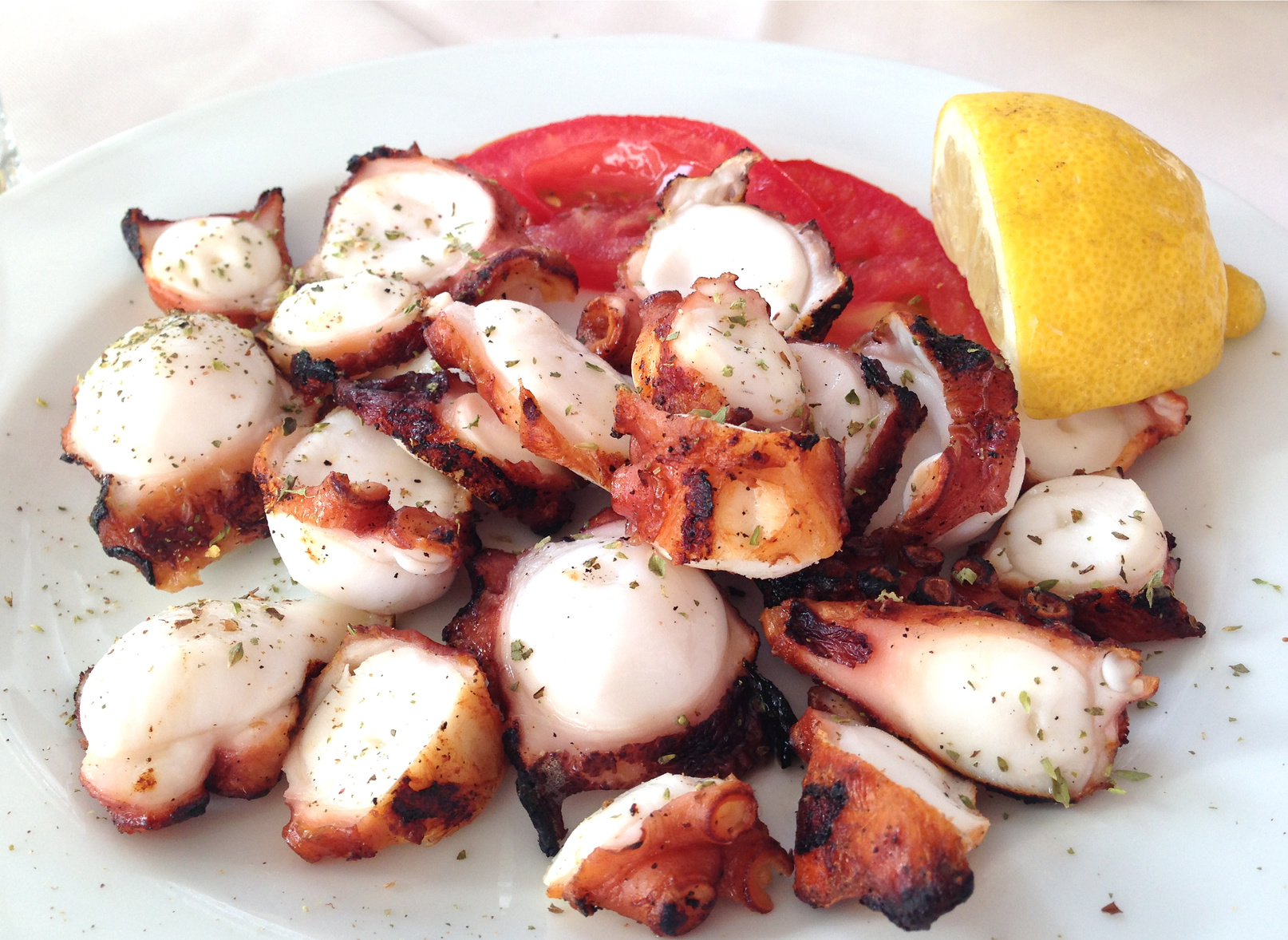 How to Get to Lindos

It’s easiest to fly into Rhodes Airport (RHO), which – if you pre-book an airport transfer – is less than an hour away from Lindos. From London, there are a variety of well-known airlines, such as British Airways, easyJet and Aegean Airways, that offer regular flights, stopping at Athens Airport before taking you to Rhodes.

After a long flight, the last thing you want to do is wait for unreliable public transportation, which is also bound to be overcrowded. Instead, why not start your holiday on a relaxed note by pre-booking a Shuttle Direct airport transfer? After meeting your driver, who will help you with your luggage, you’ll be taken directly to Lindos in a mere 52 minutes. Convenience, comfort and reliability? Check. 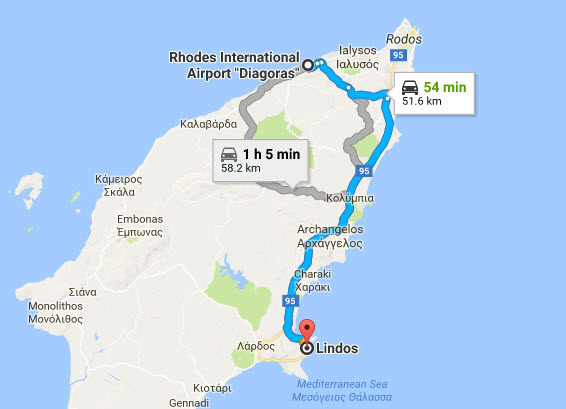 Lindos View Hotel – Thanks to its chic rooms, garden and two swimming pools, you’ll have everything you need – and more – in this five-star holiday haven. All rooms are modern, comfortable and air-conditioned; some even have their own hot tub! When you want to conclude your day in style but don’t want to venture far, you’re also in great hands here: the hotel’s elegant rooftop restaurant not only has something to suit everyone’s palate, but also overlooks the Acropolis and village. What’s not to love?

Lindos Royal Hotel – If hitting the beach is high up on your holiday bucket list (as it should be), the four-star Lindos Royal Hotel is your best bet. This luxurious property is only a one-minute walk away from the beach, but also has two tennis courts, two swimming pools and three international restaurants to keep you entertained. The private rooms, all of which are air-conditioned, allow you to take in the beauty of the Aegean Sea from the moment you wake up until you go to sleep – what more could you want?

Looking for a quick, convenient and relaxing airport transfer? Look no further than Shuttle Direct, whose leading – and pre-bookable – services are available throughout Europe and North Africa. Upon meeting your local driver, who knows the area like the back of his/her hand, you won’t have to worry about a thing: just sit back, relax and even enjoy your ride from Rhodes Airport to Lindos.