Located 230km north-west of Dubrovnik on the Dalmatian coast of Croatia, Split is a popular port of call for cruise ships visiting the Adriatic Sea. The city’s origins have been traced back to the 4th century BC when it served as a Greek colony although it didn’t become a major settlement until around 650 AD when it became an important Roman centre.

Venetian, Ottoman and Austro-Hungarian influences would follow in moulding what is today a UNESCO World Heritage Site containing a wealth of historical attractions and a delightful waterfront where visitors and locals mingle in the many bars and cafés of this delightful port city.

The arrival point for cruise ships arriving in Split is just a short walk from the Old Town where all the main tourist attractions are to be found. Just take a left as you depart from the terminal and you’ll be at the Diocletian’s Palace in less than 10 minutes. The walk is uphill so you could jump in a taxi for the short journey but please note that all the Old Town is pedestrianised so your driver will have to drop you close to one of the gates which enters this historic quarter.

If you are joining your Adriatic cruise in Split or ending here then you’ll most likely be passing through the city’s international airport which lies some 24km west of the port area. This is the country’s 2nd busiest airport with around two million people passing through it every year. There are many flight connections with cities all over Europe.

An alternative which offers the most convenience is to pre-book private transport with airport transfer specialists Shuttledirect. Their driver will be waiting for you on arrival and will drive you to your hotel in Split or directly to your cruise ship if preferred. 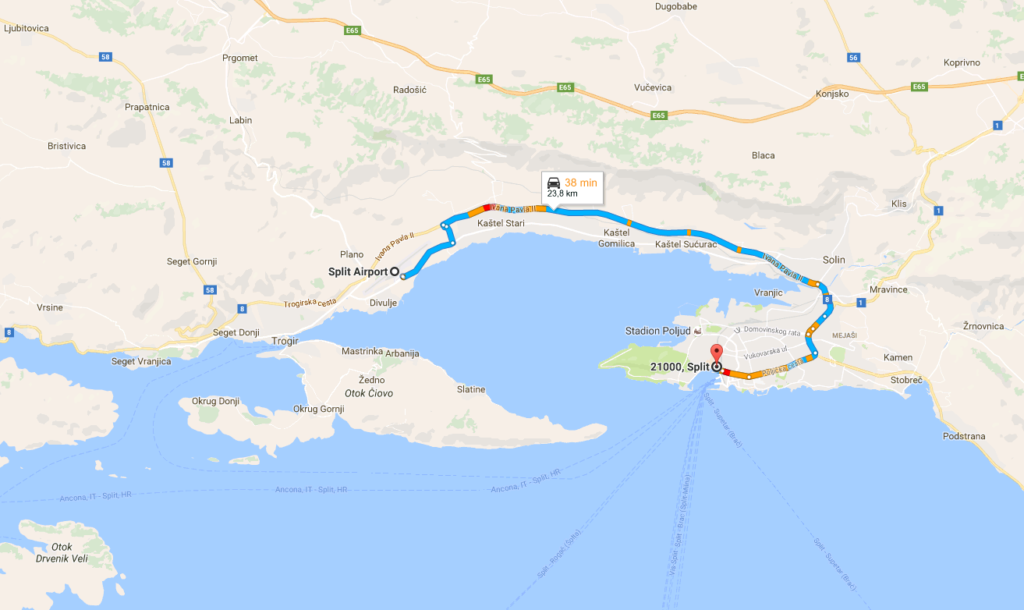 Getting Around in Split

You can easily get around the main sights of Split on foot as they are all located very close together in the Old Town. Pick up a free map at the tourist information office next to the entrance to the Diocletian’s Palace. If you’d prefer you can join an organised walking tour which departs from near the statue of Gregory of Nin just outside the Golden Gate. there are departures in English at 10.30am and midday, just look out for the guide carrying a blue umbrella.

Diocletian’s Palace: The historic Old Town of Split is dominated by the Diocletian’s Palace which is a vast area containing an impressive selection of Roman architecture located alongside tourist accommodation and a wide selection of bars and restaurants. This walled city dates back to the 4th century and was built over a period of 10 years thanks to the labour of thousands of slaves. Historically, this is Split’s number one attraction where many visitors enjoy getting their photo taken with locals dressed as Roman soldiers.

Insider Tip: For sightseeing purposes it’s worthwhile buying the multi-ticket which gains you entry into the Diocletian’s Palace, St. Domnius Cathedral, the bell tower and the crypt. 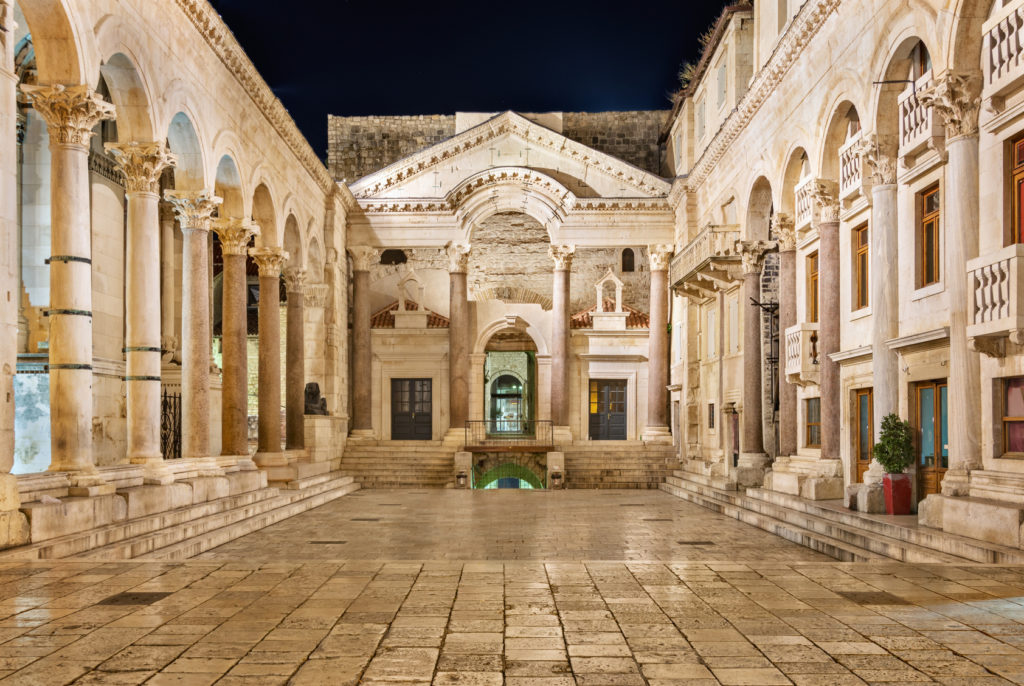 St. Domnius Cathedral: This religious building was originally a Roman mausoleum back in the 4th century before being consecrated in the 7th century making it what is believed to be the world’s oldest Catholic cathedral. You can climb its famous bell tower for great views over the city and out into the Adriatic. Immediately outside the cathedral is Peristyle Square which hosts cultural events during the Split Summer Festival.

Riva Waterfront: For many, the highlight of a visit to Split is its magnificent promenade which runs the full length of the Old Town. Lined with bars and cafés the Riva, as it is known locally, overlooks the busy harbour which is a hive of activity as tourists hop on and off all sorts of seafaring vessels that operate from here.

Insider Tip: If you fancy a dip during your time in port just stroll for a few minutes to the east of the ferry terminal and you’ll come to the Bačvice city beach. It’s typical of Croatian beaches with lots of pebbles but it’s a pleasant spot frequented by locals where the water’s clean and there are a few places to grab a light lunch overlooking the sea.

Pazar Green Market: Located next to the Silver Gate on the east wall of Diocletian’s Palace this is well worth a visit to pick up fresh, local fruits as well as cheap souvenirs and clothes. With plenty cafés around it’s also a nice spot for a casual wander followed by a mid-morning coffee break.

Klis Fortress: Followers of the TV series ‘Game of Thrones’ might be interested in taking a short excursions to Klis Fortress which lies some 10km from Split. This 2000 year old structure is used for scenes showing the city-state of Meereen in the programme. From its privileged location atop some rocky cliffs you get splendid view looking back over Split. 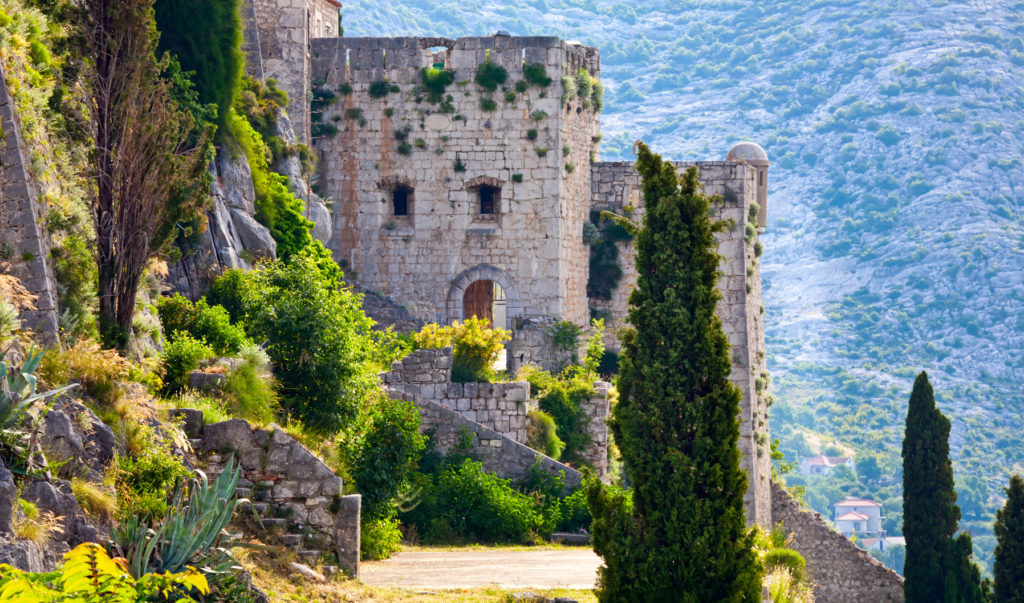 Klis – Medieval fortress in Croatia near Split in Dalmatia.

One Night in Split

For most visitors who are spending a night or more in Split the highlight of their evening is to while away a few hours in the bars and restaurants of the Riva promenade. Amongst the many eateries around you’ll notice a strong Italian influence with many trattorias serving excellent pasta and pizza dishes.

Insider Tip: For a tasty snack on the go which is typical of this region look out for the local meat pies which are called ‘burek’ and whose origins have been traced back to the time of the Ottoman Empire.

Highly recommended is Restaurant Trattoria Tinel (Tomica Stine 1) which is set back from the waterfront and has a lovely, open-air terrace. As well as traditional Italian fare they serve an impressive selection of seafood and meat dishes. For something a little more upmarket with spectacular sea views from its terrace you should try Caffe-restoran Dvor (Put Firula 14) which serves exquisite fish dishes.

If you’d like to take in a little culture during your stay head for the historic Croatian National Theatre which stages a range of opera, drama and ballet productions throughout the year.