As you approach the busy Port of Naples with the sight of Mount Vesuvius in the distance don’t underestimate what the city and region have to offer. Whilst Naples tends to play second fiddle to the likes of Rome, Turin, Milan and Florence on the Italian tourist circuit cruise ship passengers can rest assured that they have a memorable day in port ahead of them.

As well as having a historic centre which is listed as a World Heritage Site by UNESCO Naples also lies within close proximity of some world-class attractions including the ancient Roman city of Pompeii, the Island of Capri and the beautiful Amalfi Coast. And during your visit be sure to find time to sit down in a local restaurant and enjoy a pizza like you’ve never tasted before in the city where the dish was first created in the late 18th century.

Cruise ships arriving in Naples dock below the Castel Nuovo at Molo Beverello which is within walking distance of the city centre. The adjacent Stazione Maritima cruise terminal is an impressive building dating back to the 1930s although it is now a modern facility containing a shopping mall. If this dock is full vessels have to dock at Molo Pisacane which is a little further east and passengers are transferred to the cruise terminal by shuttle bus. 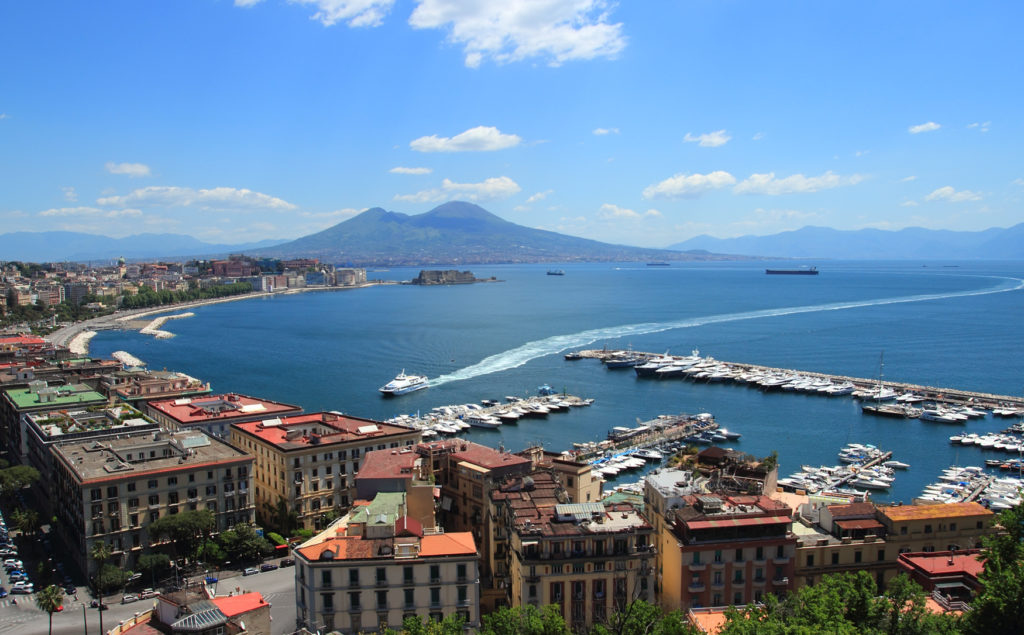 Passengers who are beginning or ending their cruise in Naples will most likely be arriving or departing through Naples International Airport which lies just 10km north-east of the cruise ship terminal. New arrivals can take the airport bus service which runs to the city’s main train station at Piazza Garibaldi as well as to the Molo Beverello at the port. Official airport taxis are available and should post the fixed rate for transfers to the Molo Beverello port inside the vehicle, however, there are many illegal taxis plying their trade. 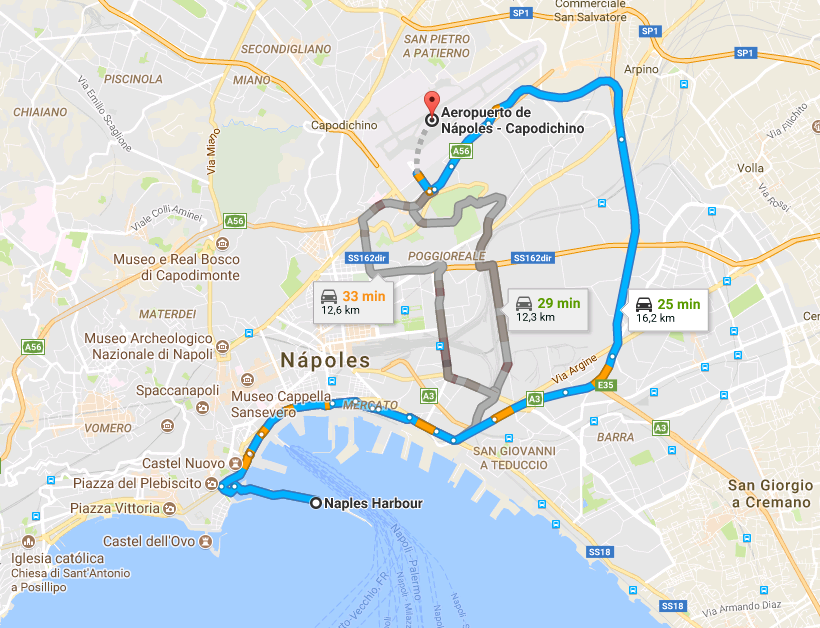 A far more convenient transport option which offers peace of mind to the visitor is to pre-book private transfers from Naples Airport with an official shuttle operator. Whilst the journey to and from the port should only take about 15 minutes the city’s traffic problems can slow down all forms of transfer so be sure to plan accordingly.

Getting Around in Naples

Local Transport:If you’re spending your day in port then you can easily walk from the cruise terminal and see the city’s main sights on foot without any need for transport. Much of the historic centre is pedestrianized, just be careful when crossing roads on your way there as the driving can be fairly chaotic to say the least. You can travel further afield by means of buses and trams. Tram number 1 runs from the port to Piazza Garibaldi where the main train station is located. If you’re going to take one of the many taxis which wait outside the port area be sure to confirm prices or ensure that the meter is working before setting off.

Day Excursions: It is highly recommended in Naples that cruise ship passengers book official shore excursions with their cruise company. These trips allow visitors to make the most of their time in port without having to deal with the inconvenience of getting around on public transport. If you prefer to travel independently you can make your way to the Stazione Centrale and travel by train to Pompeii or you can travel to the crater of Mount Vesuvius by bus from Piazza Piedigrotta. If you’re planning on visiting Sorrento on the Amalfi Coast or the Island of Capri you can travel by hydrofoil departing from the ferry dock which is next to the cruise terminal.

Naples: Most cruise ship passengers visiting Naples head out from the port to visit world-class attractions such as Pompeii or perhaps the Amalfi Coast. However, if you’d prefer to spend your day around the city there is plenty to keep you occupied. The city’s main tourist attraction is the National Archaeological Museum (Piazza Museo 19) which houses a wealth of artefacts recovered from Pompeii and Herculaneum. It is widely considered to be one of the world’s greatest archaeological museums.

The city is also home to a number of impressive castles which have played an important role in European history. Nearest to the port is the 13th century Castel Nuovo and a shortwalk to the south is the 9th century Castel dell’Ovo which stands on the small island of Megaride. The city’s cathedral, the Duomo di San Gennaro, is also worth a visit as well as a number of attractive squares including the Piazza Plebiscito.

Insider Tip: When visiting Naples be sure to find time to sit down for a Pizza Napoletana which originates from the city. Il Pizzaiolo del Presidente (Via Dei Tribunali 120) is one of many highly regarded venues for pizza lovers. It acquired its current name after President Bill Clinton dined there after a G8 conference in 1994.

Pompeii and Mount Vesuvius: The number one attraction for cruise ship passengers visiting Naples is to the archeological site of Pompeii which lies 30km south-east of the port in the shadow of Mount Vesuvius. In 79AD this wealthy Roman city disappeared under a thick layer of volcanic ash when Vesuvius erupted and wasn’t rediscovered until 1748. Incredibly the city was found to be extremely well preserved with many buildings and their contents relatively intact which has taught us a lot about life in Ancient Rome. Pompeii is one of Italy’s most popular attractions where visitors can walk around the assortment of buildings which have been restored from the ill-fated city. Whilst you can visit Pompeii by public transport it’s far more convenient to get there on one of the cruise ship’s shore excursions. These vary depending on which ship you are on but often include a half-day Pompeii tour or a full-day tour which also includes a visit to the crater of Mount Vesuvius.

Although Mount Vesuvius hasn’t erupted since 1944 it remains an active volcano which many experts predict could erupt at any time. This is a frightening prospect with some three million people now living within 30km of the crater.

Some tours will also include a visit to what was a prosperous seaport called Herculaneum before it was buried during the same volcanic eruption. Excavations here have unveiled hundreds of skeletons as well as remarkably well-preserved items including mozaics, wooden roofs and even food products.

Amalfi Coast: Beyond Pompeii is the beautiful Amalfi Coast which is characterised by its rugged coastline and former fishing villages which have been transformed into attractive holiday towns. The primary destination for shore excursions is to the grand resort of Sorrento whose history dates back to Roman times. From the clifftops visitors are treated to magnificent views across the Bay of Naples towards the Island of Capri. Look out for the local lemon groves which provide the lemons for Limoncello, the country’s favourite liqueur. Independent travellers can get to Sorrento by hydrofoil (or commuter train) from Naples but will most likely miss out on other attractions along the Amalfi Coast such as Positano, Amalfi and Ravello. Some combination of these beautiful towns is usually included in shore excursions offered by the cruise lines. 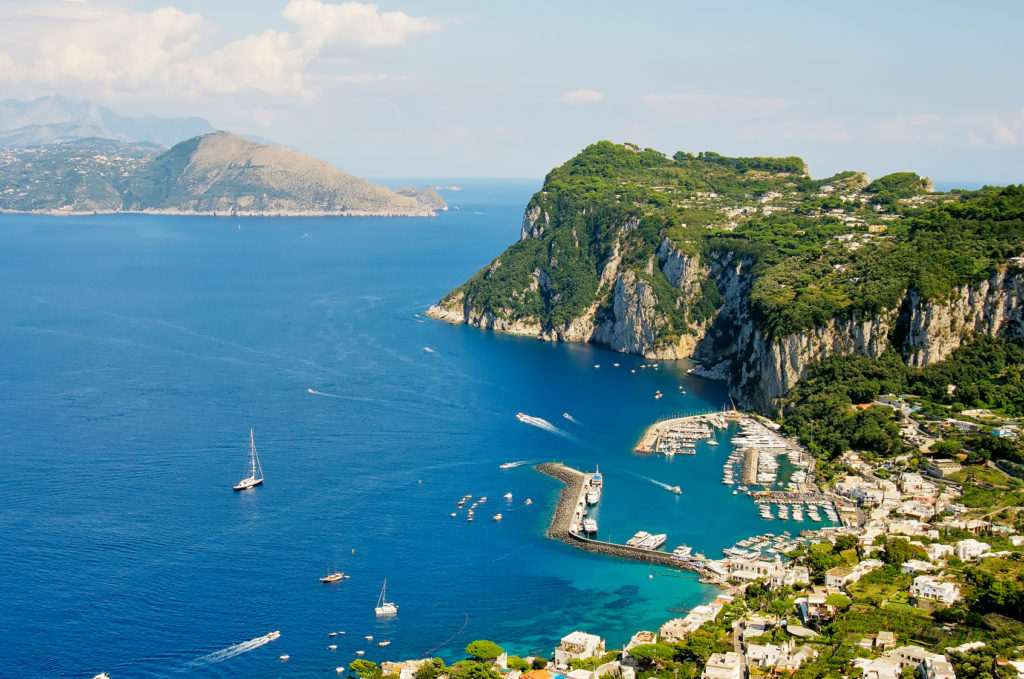 Capri: If you can cope with more time at sea you might like to visit the famous Island of Capri which lies in the Bay of Naples. This has long been a fashionable holiday resort which rose to fame in the 1950s and 60s when it became the place to be seen amongst well known members of the American and Italian movie world. High speed ferries depart from Molo Beverello next to the cruise terminal and take just under an hour each way or you can take one of the official shore excursions offered by cruise lines. If several cruise ships are docked in Naples at the same time the port of Marina Grande on the small island can get fairly chaotic.

One Night in Naples

If you happen to be staying in Naples overnight there are numerous classical theatres where it would be worth checking out if there are any performance scheduled during your time in port. Two beautiful venues worth enquiring about are the Teatro di San Carlo (Via San Carlo 98) and the Teatro Bellini (Via Conte Di Ruvo 14) both of which host cultural events throughout the year. 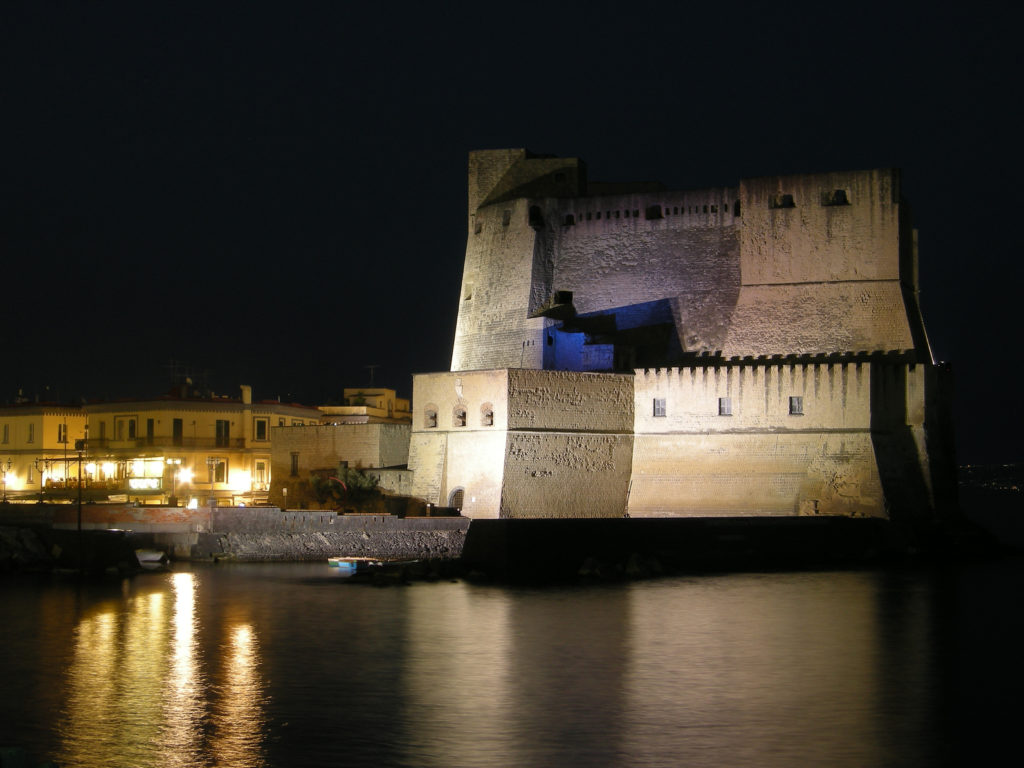 Otherwise you’d be best advised to plan on spending your evening at one of the restaurants on the waterfront overlooking the Castel dell’Ova. Zi Teresa (Borgo Marinaro, 1) is a good choice where you can order pizza, pasta and local seafood dishes. Alternatively, you can cross the bridge heading towards the castle and dine at Trattoria Castel dell’Ovo which is particularly well regarded for its seafood menu.