The Grand Duchy of Luxembourg is a great mixture of the best things expected from a memorable holiday. Its nature is abundant and beautiful, its people welcoming, and the food simply delicious. Moreover, it has a very lively nightlife and plenty of characterful culture to soak up during the day, as well as some impressive traditional festivals.

There are so many things on offer that it can be hard to decide what to prioritise. Luxembourg has gorgeous scenery with lakes, rivers, woods, and lush plains speckled throughout, allowing both nature lovers and sportspeople alike to hike, cycle, and mountain bike on its over 5000 km of nature trails. Its varied and enticing local gastronomy, including cheeses, meats, and wines, make it a food enthusiast’s heaven. Although it has the most Michelin-starred restaurants per capita in the world, Luxembourg also has plenty on offer for those looking for a more budget-friendly but equally appetising alternative, and gourmets should not miss the valley of the Moselle. 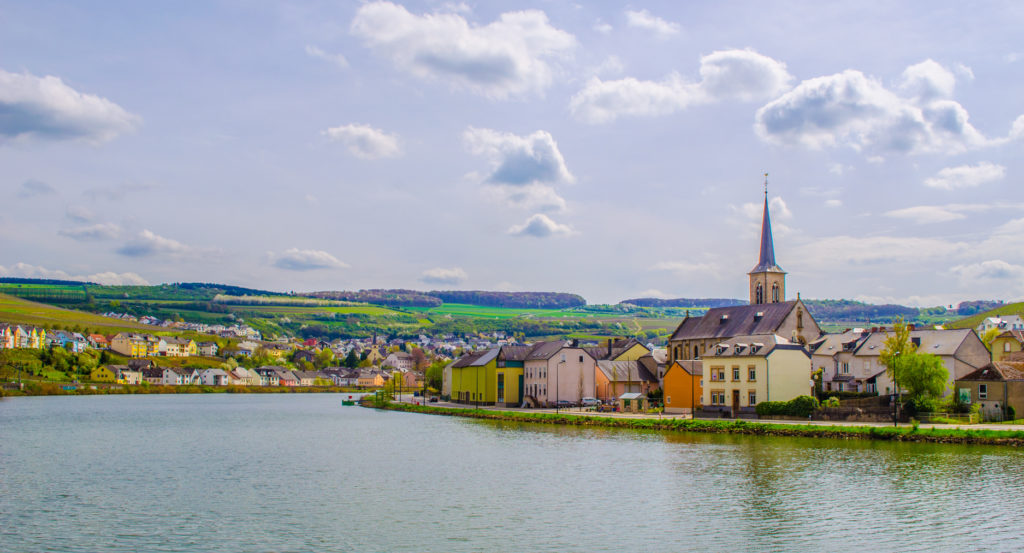 Cultural festivals abound in the Grand Duchy. Bretzelsonnden, or Pretzel Sunday, happens on the third Sunday of Lent and entails a colourful procession walking through Luxembourg City and the hand out of free pretzels. Numerous grape and wine festivals take place between April and October in numerous towns and villages, and feature live music, traditional food and, of course, wine. Finally, museums and cultural and historical hotspots are commonplace, and in this tiny country you won’t have to travel long to find them.

Luxembourg’s cuisine has been influenced by neighbouring cuisines from Germany, France, and Belgium, as well as by the multitude of Italian and Portuguese immigrants. Nevertheless, it has distinct character and flavours, and uses many of the region’s local ingredients. Fish from local rivers is the basis of many traditional dishes, as is meat such as pork and chicken. 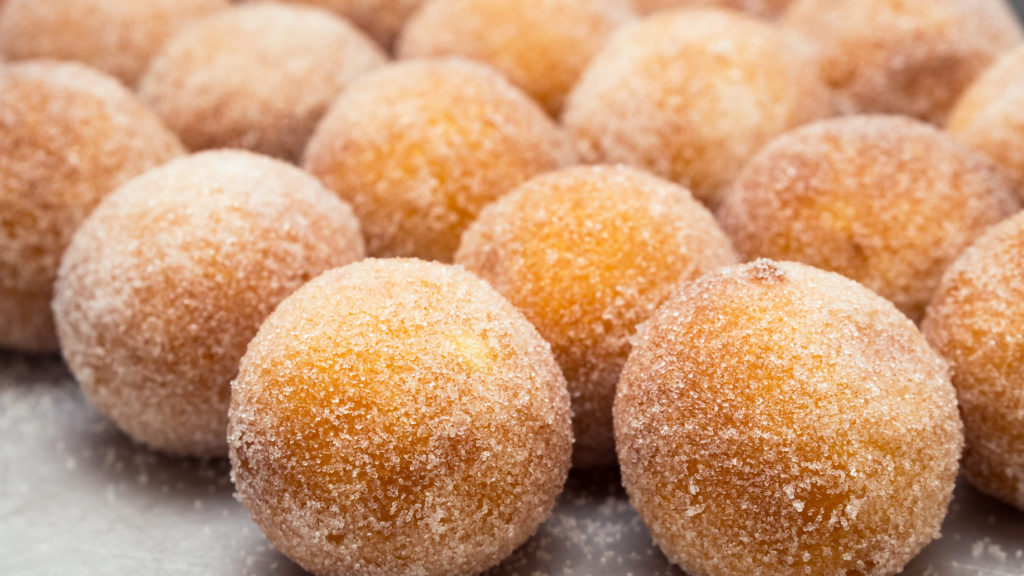 Furthermore, there is an extensive dessert tradition, including tarts, pies, and pastries. Among the most popular are Quetscheflued, a plum tart, and Verwurelte, a small, sugarcoated doughnut.

Luxembourg’s climate is temperate, which means temperature ranges are fairly small: summers are cool and winters are mild, and average temperatures go from 0°C in January to 18°C in July. Rainfall is distributed throughout the year, with the dryer months being April through September. During the winter months, the strong Atlantic low-pressure systems can cause gales and unruly weather.

If you are traveling by air, you will land at Luxembourg-Findel International Airport, just 8km northeast of Luxembourg City. Being only a 15-minute journey by car, it can be easily done by taxi or airport transfer service. Buses 16 and 29 also service the airport from the city centre and viceversa and cost €2 per short-term ticket. 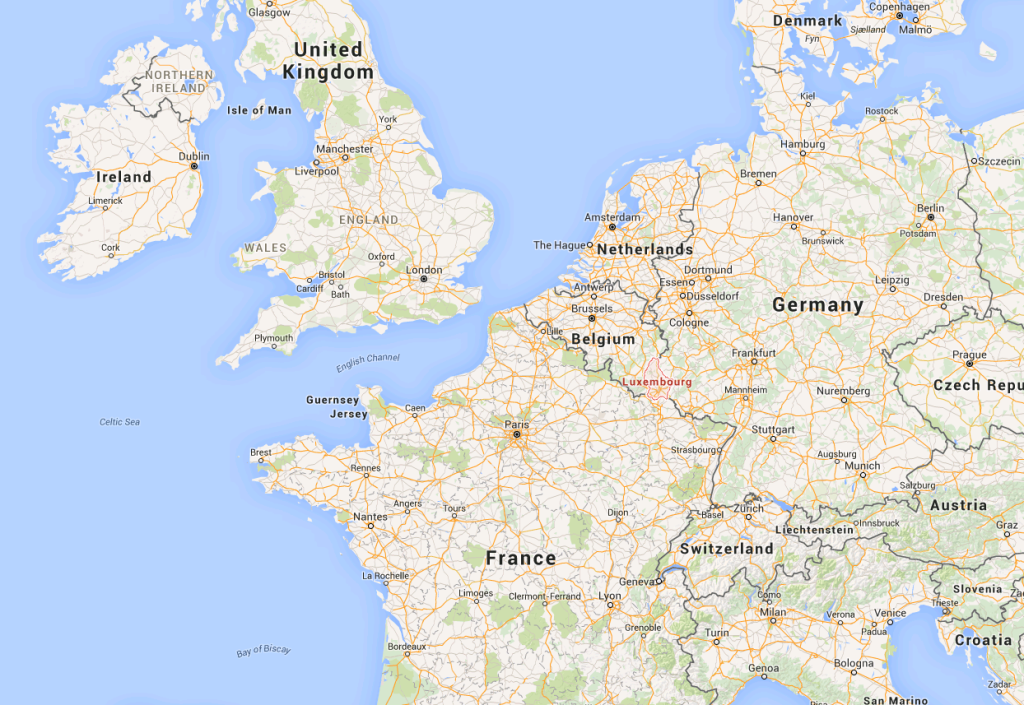 Driving to Luxembourg is fairly straightforward. It can be reached from the UK by crossing the Channel Tunnel and driving through France and Belgium. Otherwise, there are great free motorways linking Luxembourg to all its neighbouring countries: Germany, France, and Belgium.

The TGV high-speed train links Luxembourg City and Paris in just 2 hours 5 minutes, and there is an extensive railway network that connects Luxembourg with the rest of Europe. Buses from bordering countries are also easily available, although the journey can be quite long. 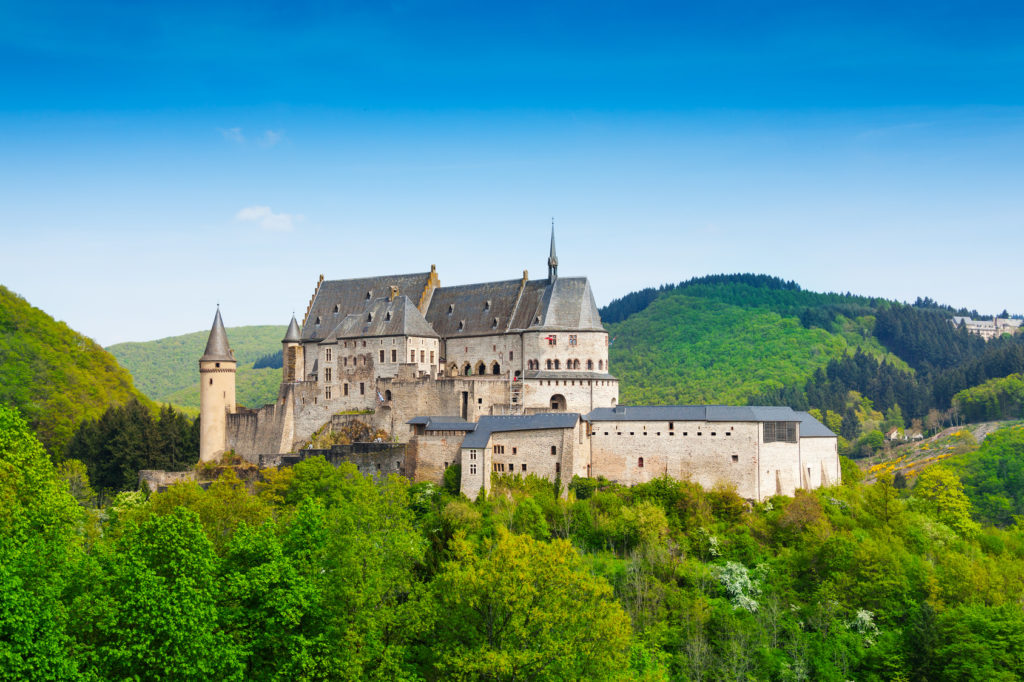 View of Vianden castle panorama with forests and hills in Luxembourg